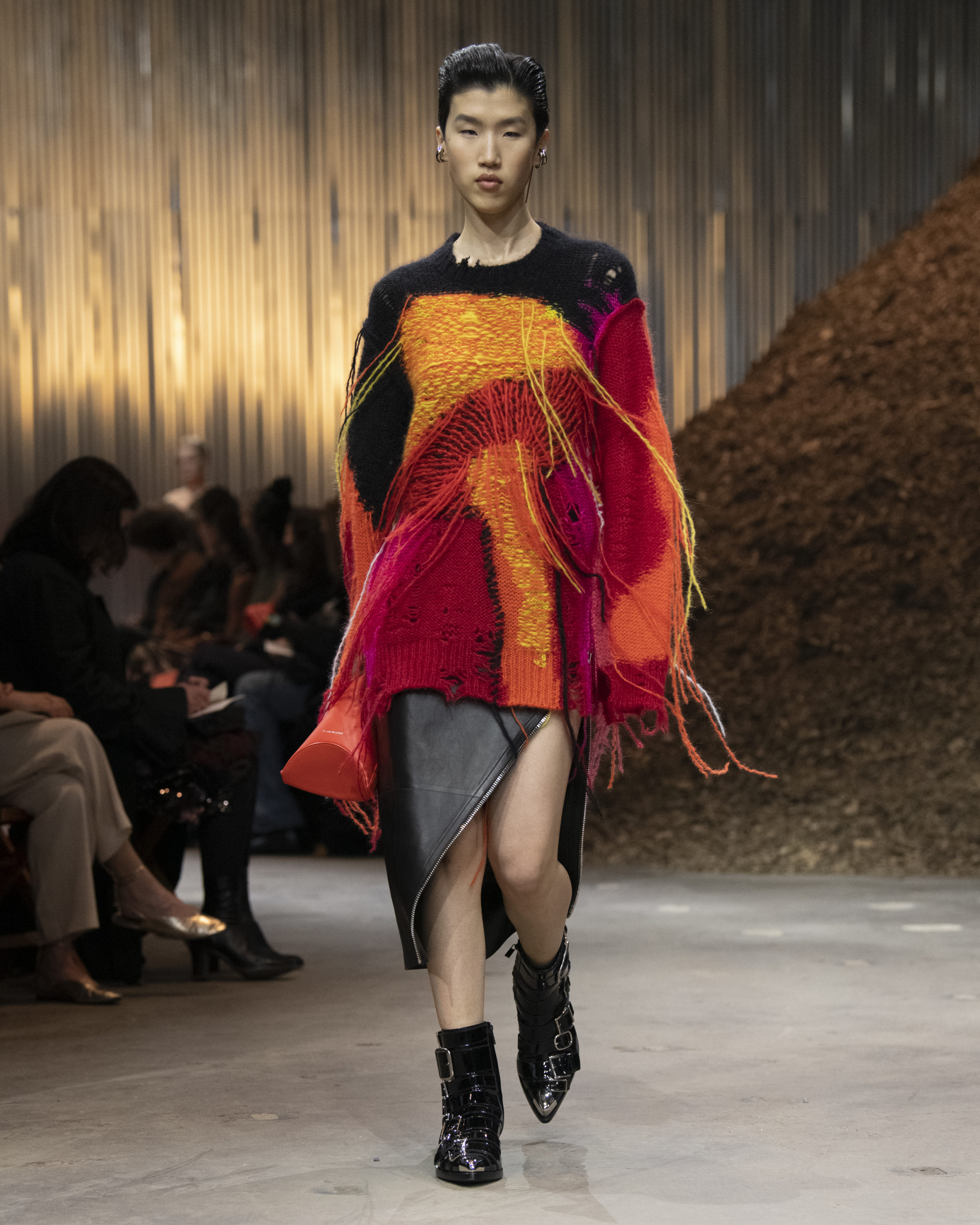 “We exist as single, individual entities on one level, but we are far more powerful connected to each other.”

Towering piles of mulch were artfully arranged in a Brooklyn warehouse this week to form a runway for the Alexander McQueen Fall/Winter collection.

Creative director Sarah Burton took inspiration from nature, namely mycelium, an underground root-like fungus that connects trees and transfers nutrients between plants. A metaphor for interconnection and community, the theme is also reminiscent of earlier collections from the late Lee Alexander McQueen, who drew inspiration from animals and the elements.

“Mycelium has the most profound, interconnecting power, relaying messages through a magical underground structure, allowing trees to reach out to each other when either they or their young need help or are sick,” Burton said in a statement.

At the show (held in New York for the first time in 23 years), this idea translated to an explosion of kaleidoscopic mushrooms. Vibrant colours, fungi embroideries and psychedelic visuals all punctuated the London-based label’s new line. Punk-inspired black designs were injected with pops of colour. Traditional McQueen leather wares like jackets, biker dresses, tops and trousers were accentuated with bondage elements like spikes, belts and straps.

Among McQueen’s models was Kaia Gerber, who donned a one-shouldered dress adorned with crystals, silver beads and pearl oyster mushroom embroidery, inspired by one that Burton saw growing outside a window of her office building months ago.

In line with the tailoring seen in New York, Paris and Milan, the clothing featured sharp-shouldered suits that look like they’d been spray-painted in psychedelic designs. The prints were a callback to one of Alexander McQueen’s most famous runway moments, the 1999 show No. 13. At the end of the presentation, two extended robot arms sprayed a white dress worn by model Shalom Harlow in black and neon yellow paint.

The new designs were a nod to the eponymous designer’s affinity for shock factor on the runway, which helped him establish a strong identity and brand. Mushrooms, meanwhile, have attracted fashion’s attention in recent years, with mycelium fabrics being lauded as a sustainable alternative to leather. In Burton’s show, 85 per cent of the materials were upcycled.

Though no mushroom leather was used in this collection, the designer said she and her team are running trials with the organic material. Metaphorically, the fungi are known to represent rebirth, transformation and enlightenment. And as Burton finds a sense of grounding in the label’s roots, the organism is the perfect representation of its future.

“We exist as single, individual entities on one level, but we are far more powerful connected to each other, to our families, to our friends, to our community,” Burton’s statement read. “As a community, we are infinitely more able to restore, reinvent, rejuvenate — heal.”

Swipe through the gallery below to see the looks from the Alexander McQueen Fall/Winter 2022 show.

I Basically Only Wear Relaxed Jeans Now—5 Simple Items I