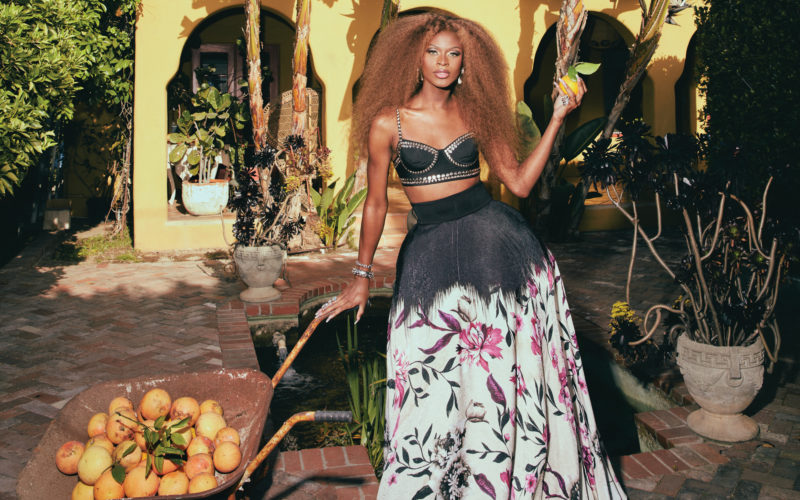 Symone is supremely stylish, charmingly goofy and the toast of the drag, fashion and, now, acting worlds. Is it any wonder she’s having the time of her life?

Drag Superstar Symone can’t stop smiling. She’s smiling when we talk about her winning season 13 of RuPaul’s Drag Race. She’s smiling when we discuss drag as a form of activism. She’s even smiling when she experiences tech troubles. And it’s not just any smile; it’s a rare smile that feels completely genuine. It’s radiant, infectious and just a little goofy, and it takes up her entire face. And with the world at her bedazzled fingertips, Symone truly does have a lot to smile about.

During her time on Drag Race, the self-proclaimed “Ebony Enchantress” quickly became a favourite among fans and judges for her bubbly personality, quirky laugh and avant-garde style. Since winning the crown in 2021, she has become a bona fide fashion icon, sitting in the front row at various fashion weeks, starring in Moschino’s Fall 2021 campaign and gracing the Met Gala red carpet. 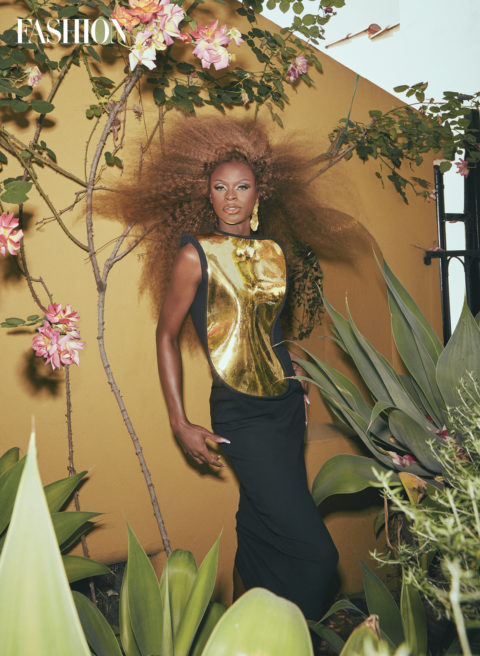 But I’m not greeted by an elaborate hairdo or a designer gown on this particular rainy afternoon. Instead, Symone is out of drag, fresh-faced and wearing a graphic Tina Turner T-shirt. Behind her, I get a glimpse into her L.A. life: leftover takeout on a coffee table; laundry on its way to the washer; piles of books and magazines waiting to be read. It’s a magical mess that you might expect to find in the home of five drag queens, a couple of whom make repeated appearances in the background throughout our video chat. “We’re very much a family,” says Symone of her drag mom and sisters, who call themselves The House of Avalon. “I’ve known them since my sophomore year of college, so I’ve pretty much grown up with them.”

Before meeting her drag family, Symone was a makeup-obsessed teen from Conway, Ark., who would rush home from school to try out beauty tutorials. “I had two hours before my parents returned from work, so I would do my makeup, and then as soon as I heard the garage door open, I would wipe it all off,” she says. Symone’s secret hobby — inspired by early seasons of Drag Race and her mom’s love of dressing up — quickly evolved into an integral part of her identity. “I wanted to find a way to express myself because being a teenager was rough,” she says, referring to her experience with bullying in middle school. With some extra cash coming in from a part-time job, Symone was able to quietly build a makeup collection from Target and started to post her looks on Instagram. 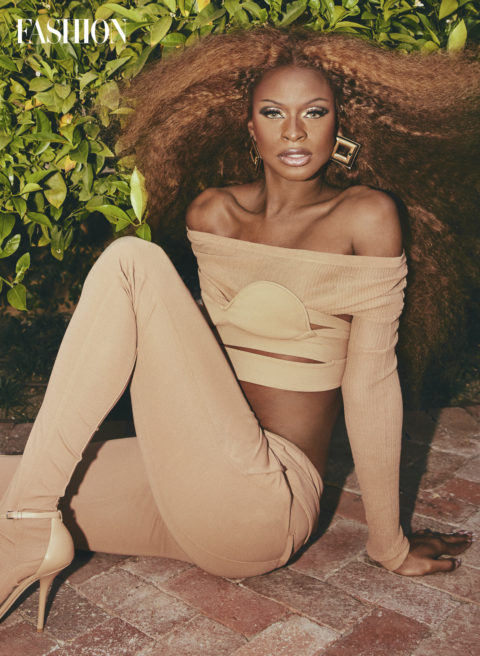 Despite Arkansas’s conservative reputation, Symone grew up in a more open-minded part of the state, with her family fully embracing her queer identity once she told them. “Of course, it was still a challenge, and I still went through being [derogatorily] called ‘gay’ and all of that, but it was nothing compared to if I had lived 30 minutes away,” she explains. “I also think that because of the internet and Drag Race becoming more mainstream, when I got to high school, my sexuality and hobbies weren’t such a big deal. Even if people weren’t on board, they were at least open to it.”

It was one of Symone’s friends who encouraged her to have her first-ever drag experience at the school’s prom. “It hadn’t occurred to me to do it until she said it,” admits Symone. And thanks to the mom of one of her classmates (“she was the only shop owner who would let me try on a dress”), Symone was able to pick a pretty little pink number to wear and even got the support of her principal. “At first, he didn’t recognize me, but when he did, he told me that I looked great and that if anyone said anything to me, I should let him know.” 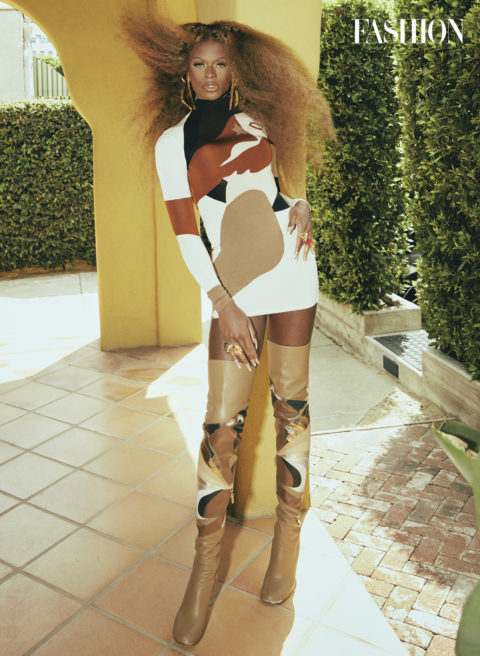 Symone’s first drag performance was at a local bar’s amateur night a few months later. “I was so nervous that I was shaking,” she recalls. “But as soon as the hostess introduced me, it was like a switch. I still can’t really explain it. I remember the spotlight hitting me and then it was over.”

But Symone’s drag career was just beginning. During her time at the University of Arkansas at Little Rock, she met Grant Vanderbilt, a House of Avalon resident, at a drag competition. In fact, it was Vanderbilt who encouraged her not to wear body padding, which Symone has now become known for. “I didn’t know it was possible to be a drag queen without padding,” she says. “Then I tried it, and I felt so free, so I kept doing it,” she laughs. Soon, she spent every weekend and summer with The House of Avalon in Little Rock and eventually became a permanent member of the drag family in 2019, when she moved into their L.A. complex. It was there that Symone decided to apply to be on Drag Race. “I didn’t think I was worthy enough to be on the show, but everyone in the house was literally screaming at me to send in a tape, so I did.” 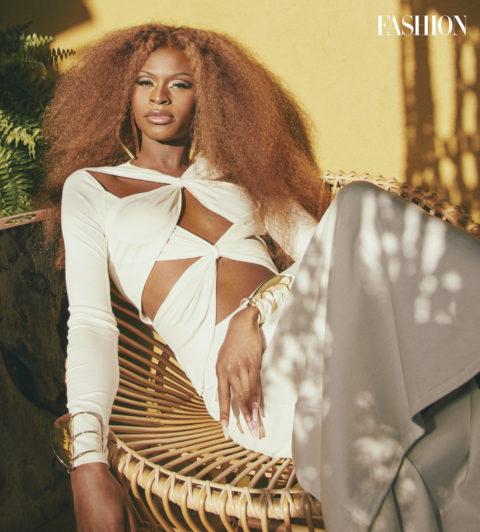 And the rest is history. When Symone won multiple challenges and created numerous viral fashion moments, including a white dress adorned with bullet holes as a tribute to the Black Lives Matter protests, it was clear that she had come to not only slay but also be unapologetically Black and celebrate her culture.

For Symone, drag is more than dressing up; it’s activism. “By its very definition, drag goes against society,” she says. “Society fears what it cannot control, and you cannot control a drag queen.” But, ironically, drag has given Symone a sense of control over her own life. In an especially poignant Drag Race episode, Symone revealed that as Reggie (her name outside of drag), she felt pressure to be perfect after her brother was arrested. “Symone could do anything she wanted — she could get drunk and be loud and have fun,” she explains when I bring up this moment from the show. “Reggie had to protect his family. He couldn’t make mistakes because he had a real life. So when I discovered drag, it gave me the freedom to not be that person.” 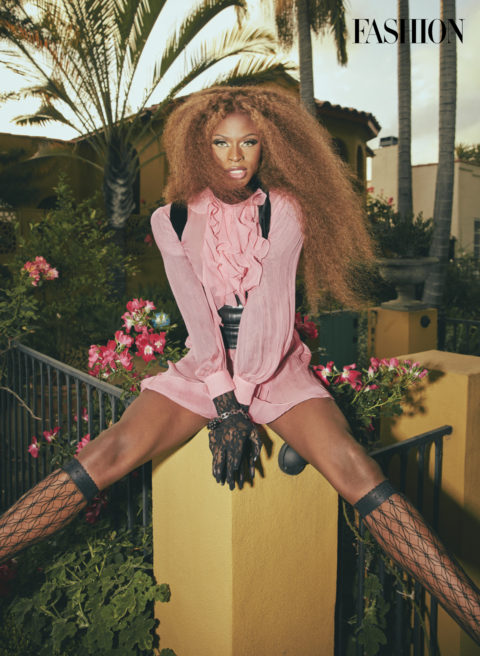 As the years have passed, the lines between Reggie and Symone have increasingly blurred. “Most queens say it gets harder to balance the two personas, but I think it’s gotten easier,” reveals Symone. “At first, they were two separate entities in my head, but this past year has helped me pour Symone’s charisma, uniqueness, nerve and talent back into Reggie.”

This new confidence in her personal life has led to more self-assuredness in her professional one. A 30-second scroll on Symone’s Instagram account demonstrates just how fearless she truly is, especially when it comes to fashion: a neon-green tulle ball gown by Christian Siriano; a Mona Lisa crop top by Jean Paul Gaultier; an all-leather jumpsuit styled by Zendaya’s fairy godfather, Law Roach. Then there are all the magazine covers, red carpets and front row seats at global fashion weeks. “Drag queens are fashion’s new muses,” says Symone of the industry’s current interest in her and her sisters. She explains that “drag queens are always at the forefront of culture,” and considering the massive success of Drag Race — the show is now in its 14th season and has inspired a large count of spinoffs, including Canada’s Drag Race — she’s not exaggerating. Contestants on the show become celebrities overnight, and for Symone, this has led to her pursuing acting, specifically in Bros, the first major studio film to feature an all-LGBTQIA2S+ cast playing all-LGBTQIA2S+ roles. “Acting is similar to drag in that you get to play with how people see you,” she shares. “But I wouldn’t say Symone is a character; she’s more just who I am.”

And who she is is unapologetically herself. She is quick to smile — even quicker to laugh — and brings sunshine wherever she goes. “Drag saved my life,” she reveals. “I mean it. I would not physically be here right now without it. And I think that’s what keeps all of us queens going. We know what it’s like to literally fight to be ourselves. All I want for my drag is for other people to enjoy it and experience it. Making people happy makes me happy.” Mission accomplished. 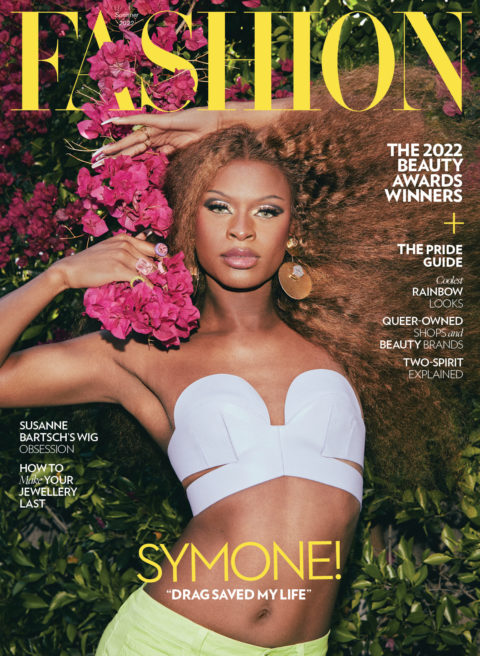 How Prom Inspired These Two Creatives to Live as Their

Is this Gaspar Noé’s most religious film?

Interview with Sarah Forester Davis, Author of Her Name is