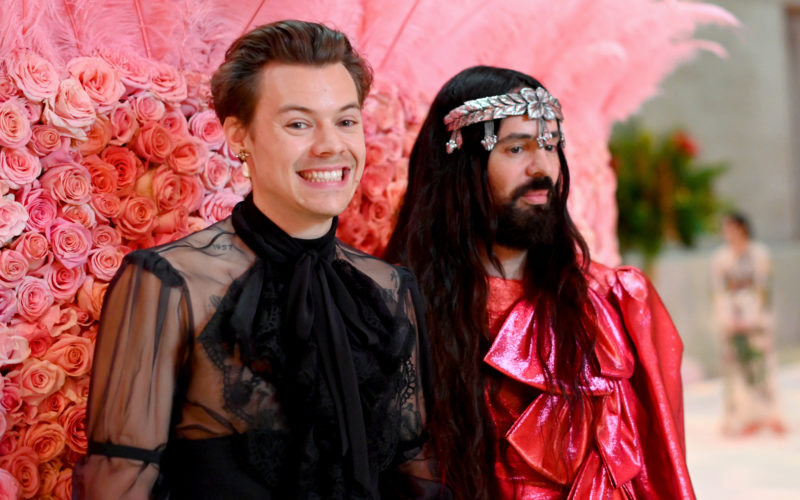 In this world, it’s just Harry Styles and Alessandro Michele.

Sometimes, two people that are destined to be together actually do find each other. And no, we’re not talking about Harry Styles and Olivia Wilde. More than just a muse, the pop singer’s creative kinship with Gucci Creative Director Alessandro Michele has taken the two from the red carpet to the stage (see: the theatrical Gucci jumpsuits Harry Styles has been wearing on tour). And now, the fashionable friends have birthed a collection of comical wares: Gucci HA HA HA.

“HA HA HA” represents not only the initials of Harry and Alessandro but also the way laughter is communicated via text message. The two have ended their cellular correspondence with “hahaha” for years, Gucci’s release reads, and it’s this exchange that grounds the collaboration.

“Harry has an incredible sense of fashion,” Michele stated. “The idea of working together came to me one day while we were talking on the phone: I proposed creating a ‘dream wardrobe’ with him…We ended up with a mix of aesthetics from 1970s pop and bohemian to the revision of the image of the gentleman in an overturned memory of men’s tailoring.”

Set to drop in October, the collection of jackets, coats, pants and accessories feature elements of English tailoring, like the use of Prince of Wales check to create double-breasted coats and accents like mother-of-pearl buttons. Alongside sartorial suits, treated denim jackets and velvet suits in irregular hues are printed pajamas and bowling shirts, lined coats with hoods and frog fasteners and pleated kilts with leather regulating straps.

Swipe through the gallery below to see the playful assortment from Harry Styles and Gucci.

‘Allegoria’ Exclusive Clip: Sometimes Your Date Just Isn’t Into Your

Grace ITV cast: Who is in the cast of Grace