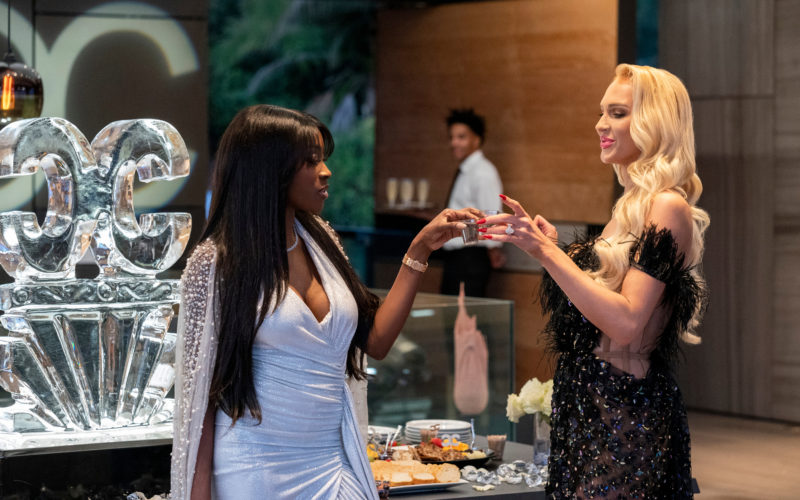 Botox, bribes and the melodrama of It all.

I started watching Selling Sunset the year after it had first premiered, when a coworker promised I’d fall in love with “the mean one in the black wedding gown.” She was right, because after only a few episodes, I was enraptured by Christine Quinn’s cinematic presence and the Short Kings (Jason and Brett Oppenheim) running the Oppenheim Group.

The reality series follows Quinn and the other real estate agents working at the luxury brokerage. In those early seasons, what it lacked in plot and diversity, it made up for by being incredibly easy to consume. The insane music choices and gratuitous entrance sequences, for example, stunned and horrified me in equal measure. And, according to TikTok, I wasn’t alone.

After shady cocktails, $75 million dollar listings and gentrified empanadas, I don’t know what I expected from season five, which premiered last month. Whatever it was, I didn’t get it. Instead of (to paraphrase Riverdale’s Archie Andrews) the epic highs and lows of Los Angeles real estate, we genuinely got…nothing. Like, “Go girl, give us nothing!” nothing. I couldn’t figure out how this addictive, high drama show had become so painfully dull that I had to watch it at a 1.5 playback speed just to finish.

All became clear a week ago when Netflix released the reunion episode. As the cast (minus Christine and Amanza, the latter appearing via host Tan France’s iPhone) sat around denying PR relationships and fake accents, I realized that the stakes were no longer low, but they weren’t high either — they were merely mid. The season’s fatal flaw was what I call a Soap Opera-fication, where nothing gets resolved, but also nothing of significance ever really happens.

Let me break it down.

In soap operas, there’s always a “Big Bad” who serves as the human personification of evil. From Stefano Dimera (Days of Our Lives) to Alistair Crane (Passions), these rich and powerful patriarchs were perpetually puffing cigars and ruining lives. On Selling Sunset, this honour (and burden) falls to Christine Quinn, our brazen Botox blonde and the only interesting person on the show. Her absence from the reunion made it unbearably boring, and TikTok agrees so it must be true.

When she’s not in a scene, they gossip about her. When she is, they freeze her out (then gossip in confessionals). They all insist she’s hurt them time and time again, but the trouble is that at most she’s — *checks notes* — said mean things to the press. That’s it. Yet everyone demonizes her for the same gossip they engage in on screen. In the end, it’s hard to sympathize, especially when the grievances are contradictory (yes, Mary Fitzgerald, we clocked you forgetting Christine’s birthday while complaining about the quality of her friendship).

Soap operas are hinged on a dozen pivotal events that shape the series for years to come. In Passions — the iconic soap starring Chrishell Stause’s ex-husband and his ex-wife — it was Sheridan’s kidnapped baby and Ethan’s paternity test. Very high stakes. In the latest season of Selling Sunset, however, all of these pivotal moments happen off screen and we’re left to play catch up. But they do show us plenty of confusingly passive aggressive responses like this:

This betrays the promise of reality TV, which is that if I tune in, you’ll show me something cool, not just talk about something cool. In the first season of Selling Sunset, we got to see Moissanite Gate play out in 4K along with the finale blowout. This season, the drama was confined to conversations about texts, phone calls and dating apps. Share your screen with the whole class or save it for your memoirs. It’s giving middle school.

Soap operas are infamous for poor writing, but so is reality TV. I won’t pick apart production logistics, but I will say this: not everyone is meant to be on television. It’s hard to be interesting on camera, even if you’re beautiful. Production needs to cut out the bad and amplify the good, because this season was beyond cringe-worthy. Emma Hernan’s pool walk, for example, was described to me by a friend as being a “brutal viewing experience.” Dare to disagree?:

Even though she gave us plenty of fashion fodder, a lot of Hernan’s scenes felt inauthentic. From the Olympics to Ben Affleck to Micah, she comes across as a stiff plot device. So, producers, stop forcing these mid-level plot points on her and us. The $5,000 bribe, for example, was explained in the reunion as a common real estate practice. Newcomer Chelsea Lazkani said that other agents often poach clients by saying things like, “I will knock a point off my commission in order to get the listing.” So why did they paint this as something much more malicious? Production is steering you astray, girlies.

All in all, season five made one thing clear: the sun is setting on Selling Sunset, at least for me. The delicious vibe the show cultivated through the first few seasons is gone, and no amount of glittery blazers or bad hip hop parodies can satiate my appetite for what once was. But hey, there’s always Selling the OC.