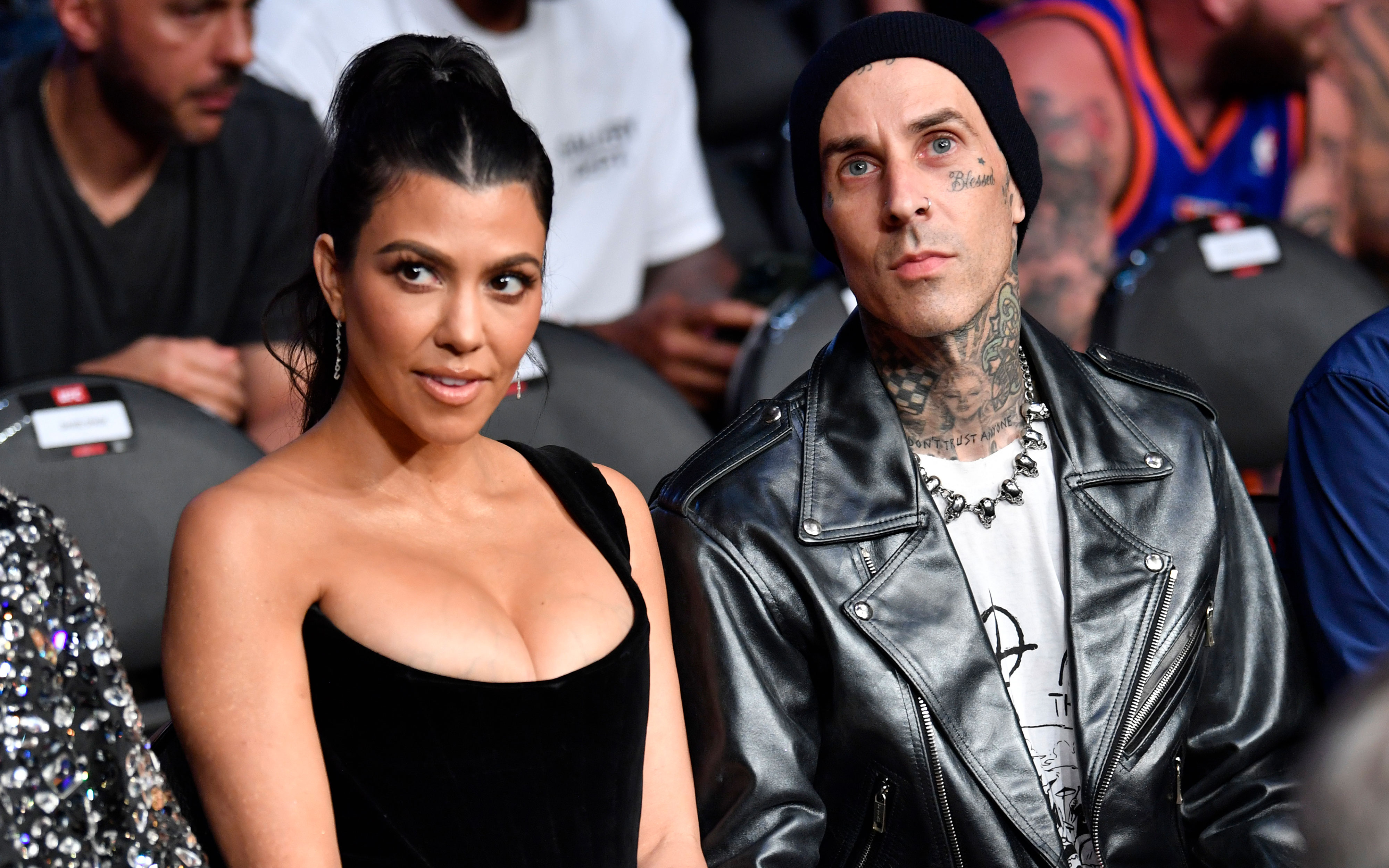 Plus, a relationship timeline to get you caught up on the celebrity romance.

In news that should come as a surprise to no one, Kourtney Kardashian and Travis Barker (aka possibly the most PDA-loving couple to ever exist) are now engaged. Since the pair started dating publicly, the Keeping Up With the Kardashians star and Blink-182 drummer have become one of the most visible couples on social media. From flirtatious Instagram comment exchanges to almost X-rated couple pics, these two have been very open about how utterly obsessed they are with one another. And on October 17, the pair revealed they’ll be tying the knot when Kardashian posted a picture of herself with Barker on a beach surrounded by hundreds of roses and candles. She tagged Barker in the caption, writing “forever.”

Congrats are in order for the punk-rock couple. Let us celebrate with a detailed relationship timeline! Read on for the most memorable moments in Kravis history.

After the two post pictures on their respective Instagram Stories with the same Palm Springs destination view, fans begin speculating that they are dating. E! News reports that a source close to the couple confirms the two are an item on the low.

Kardashian posts a subtle yet unmistakable confirmation picture to her IG feed. The post, which shows her holding hands with Barker, was then re-shared to his Instagram Stories.

On his Instagram Story, Barker shares a handwritten note from Kardashian, which reads: “To lots of fun adventures, may we destroy each other completely. Love Kourtney.” Saucy!

The musician appears as a guest on The Drew Barrymore Show, where he talks about how, as a father, he appreciates that his new girlfriend also has kids.

“I dated girls who didn’t have kids and I find it hard because they would have trouble understanding like, ‘Why don’t you want to go to dinner every night with me?’” he said. “And now I’m spending time with a woman who’s a great mom, who’s a great friend and you don’t have to worry about any of those things. It just comes natural, it’s like a maturity thing.”

After weeks of flirtatious comments and captions on Instagram, the celeb couple confirms they’re officially in love. On his Instagram Story, Barker posts a picture of a note that reads, “I love you” in Kardashian’s handwriting.

Barker posts an action picture of him playing the drums, captioning it, “All day I dream about sex w/ you.” And in case it wasn’t clear who he was talking about, he made sure to tag Kourtney Kardashian in the photo.

For the reality star’s 42nd birthday, Barker pulls out all the stops. Aside from gifting her a very elaborate floral arrangement, he posts an adorable birthday message on Instagram. “I FUCKING LOVE YOU! YOU’RE A BLESSING TO THIS WORLD,” wrote the drummer under a series of photos and videos of the couple. “HAPPY BIRTHDAY.”

The KUWTK star shares a photo of Barker holding and kissing her on a desert vacation, writing in the caption, “Just Like Heaven.” The Blink-182 star comments, “ EVERYTHING.” He also posts a pic of his own from the getaway, writing, “Anywhere with you.”

The Poosh CEO shares a series of photos on Instagram that show her tattooing her boyfriend’s forearm the words “I love you.” In the caption, she writes, “I tattoo.” Barker cheers her on in the comment section, calling her a “woman of many talents.”

A video taken by Barker’s daughter Alabama shows the couple getting cozy on a piano bench, playing a duet of “Heart and Soul.” The musician then shares the video to his own Instagram feed, jokingly writing, “Album coming soon.”

Kardashian posts a series of photos and videos of her daughter Penelope on her ninth birthday with a new drum set. One of the videos shows Barker helping the birthday girl practice her drumming skills. He comments on Kardashian’s post, writing: “Penelope you’re a rock star.” There are many perks of your mom dating a famous drummer, it seems.

On a hot summer weekend, Kourtney Kardashian and Travis Barker jetted off to Vegas to watch a UFC fight. In Kravis fashion, they made no efforts to conceal their PDA while attending the event. The duo also shared a slew of romantic pics from their weekend away. Barker’s daughter Alabama reshared one of their posts to her Instagram Story, writing, “So happy for you guys.” This prompted fans to beg the question, what exactly makes her “so happy” for them?

While on a romantic getaway in Italy, Kardashian and Barker were seen snogging on a boat ride (as is expected of any doting couple). This rubbed Kourt’s ex (and father of her three kids) Scott Disick the wrong way. In an apparent state of anger, Disick sent the picture to Younes Bendjima, Kardashian’s other ex, attempting in an attempt to shame Kardashian’s behavior. Needless to say, that plan backfired on Disick when Bendjima refused to partake in the one-on-one gossip, instead sharing the convo to his Instagram Story with the caption, “Keep the same energy you had about me publicly, privately.” Yikes.

When attending the 2021 VMAs, the couple looked more in love than ever. Barker sported a black suit accentuated with spikes on the shoulders and knees, while Kardashian opted for a black leather lace-up minidress — solidifying their aesthetic as the ultimate goth couple. The two also had memorable photo-ops with the internet’s other fav punk-rock pairing, Machine Gun Kelly and Megan Fox.

TMZ reported the pair got engaged in Montecito, California, surrounded by select family and friends who were there to bear witness. The couple hosted a celebratory engagement dinner, attended by the Kardashian-Jenners and Barker’s kids Alabama and Landon Barker. Kim Kardashian, Kendall Jenner and Kylie Jenner all shared snaps of their sister’s new engagement ring — and it is quite the rock!

This article was originally published on July 16, 2021.