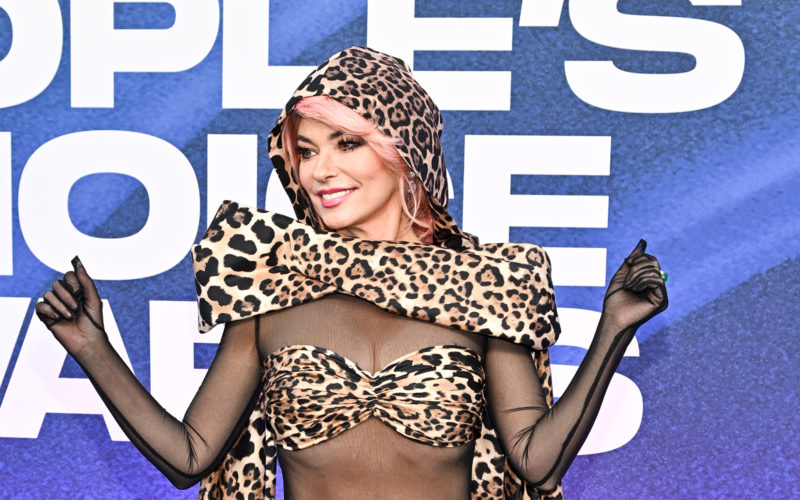 As the wise Shania Twain once said, “The best thing about being a woman is the prerogative to have a little fun.” And if the 48th People’s Choice Awards are any indication, that’s a motto she still lives by.

At the December 6 awards show, Twain surprised the world with a delicious dose of nostalgia by paying homage to none other than herself. Sporting custom Rodarte, the Canadian country-pop star referenced her famous 1998 “That Don’t Impress Me Much” look, and we’re all better for it.

In case you need a refresher (how dare you?), the legendary music video shows Shania Twain roaming around a desert in head-to-toe leopard print, expressing her disinterest in a man who thinks he’s all that. In under four minutes, the video gave the world a catchy anthem, a taste of cutting-edge cinema, and obviously, timeless style inspiration.

Naturally, the 2022 version of the look was reinvented with a high-fashion touch, thanks to the L.A.-based luxury brand. Twain’s leopard-print bandeau was layered atop a long-sleeve mesh bodysuit that flowed into a black velvet floor-length skirt. With a replica of the original outfit’s hood and an added sculptural scarf, Rodarte’s reimagined ensemble was both nostalgic and contemporary. But Shania Twain didn’t stop there. The 57-year-old completed the more-is-more ensemble with all-pink glam: from rose-gold hair to vibrant eyeshadow and lipstick. Consider us, for lack of a better word, impressed.

After all, no one has a leopard print legacy quite like Shania Twain. In the ’90s, the singer-turned-fashion-darling became practically synonymous with the speckled pattern, sporting it anywhere from awards shows to live performances. Over time, her penchant for the fierce motif has come to symbolize her always-empowering songs. Fittingly, at the 2022 People’s Choice Awards, the singer and her signature self-expression were rightfully celebrated.

Not only did she receive the prestigious Music Icon Award, but she took the stage for the first time since 2005 (!) to sing a medley of her biggest hits. The performance featured two more outfit changes, including a bedazzled nude bodysuit and a Barbiecore Western wear get-up reminiscent of her look at the 1999 Country Music Awards. Simply put, it was Shania Twain’s night.

“The biggest honour, for me, is knowing that people have somehow found strength and inspiration in what I have to say,” she said in her acceptance speech, before thanking her fans for their support. Her parting remarks? “All I have to say is: be the queen of you.” Spoken like an era-transcending icon.

Along with having Twain as a guest of honour, the People’s Choice Awards welcomed a dazzling group of attendees, from ’90s It Girl Sarah Michelle Gellar to red carpet risk-taker Michaela Jaé Rodriguez. Style-wise, there was no cohesion in sight on the colourful red carpet, and that’s a good thing. Billy Porter caught our eye with dramatic, deconstructed ruffles and chalky black eyeliner. Lizzo stood out in an embroidered Alexander McQueen cut-out frock. Laverne Cox ditched body-hugging silhouettes for extravagant bustles.

With each eclectic ensemble celebrating individuality, it’s clear that Shania Twain’s “Let’s go girls!” ethos permeated the mood for the evening. Personally, we wouldn’t have had it any other way. Below, we round up some of the most fun, fresh and daring looks from the People’s Choice Awards 2022 red carpet.