Slouchy Thigh-High Boots Are Back, I Fear 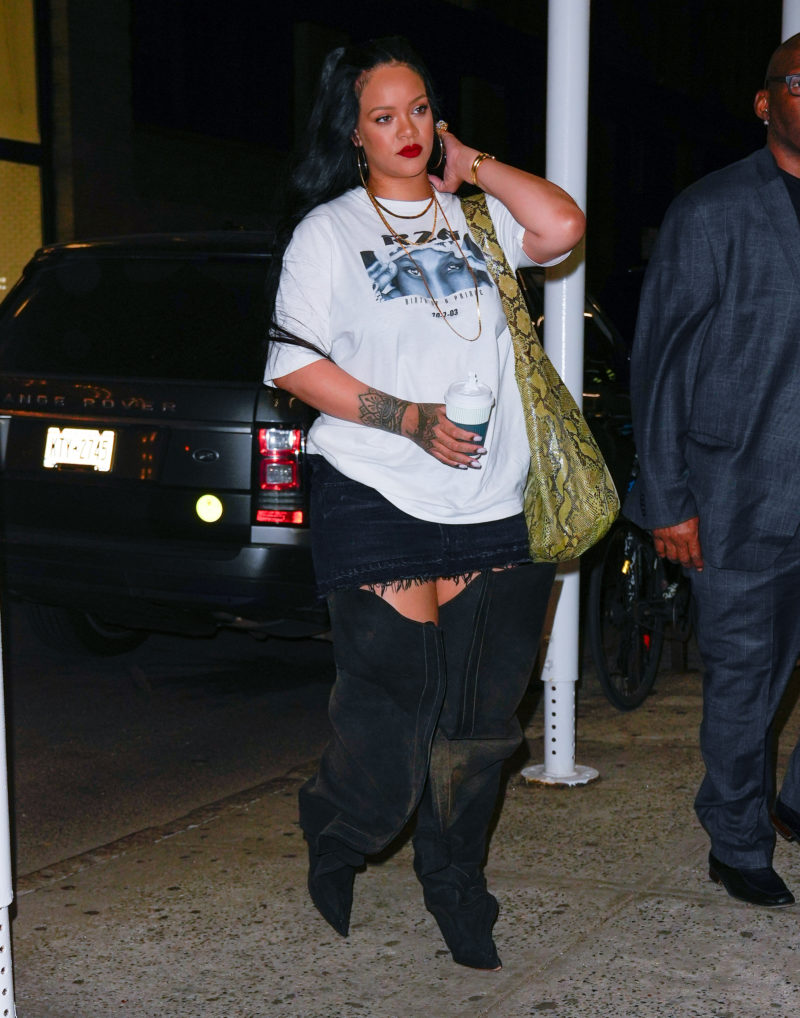 Potato sack, but make it fashion.

For me, larger-than-life slouchy boots are kind of like horror movies. When I see them, I can’t look away. And out of fear, I respect them. But that doesn’t mean I have to like them. Naturally, seeing these bodacious boots back in vogue leaves me with mixed emotions.

Rihanna was the first to mark their return. On a recent outing with partner A$AP Rocky, the beauty mogul donned a pair of massive denim heeled thigh-high boots from Y/Project’s spring-summer 23 collection. The shoes were tall and wide, grazing the bottom of her mini skirt and leading some to mistake them for pants. With that, the case for confusing footwear was reopened.

Just this week, Kim Kardashian, Khloe Kardashian and Kylie Jenner have stepped out in an iteration of the slouchy sky-high boot. And months ago, excessive footwear was stomping all over the fall 2022 runways. Designers such as Isabel Marant, Alaïa and Balenciaga all introduced their own take on the utterly oversized shoe. As these boots climb higher and higher, I worry for feet everywhere.

I can get past the fact that they resemble my dad’s waterproof waders. It’s the logistics that leave me dumbfounded. With furrowed material that widens out at the top, they appear to defy gravity. Their vague similarity to the Sorting Hat from Harry Potter leaves me wondering if they’ll come alive. They rub together as you step, creating a sensation that I can only imagine is comparable to wading through quicksand. The fact is, these boots are simply not made for walking.

Don’t get me wrong, I understand their subversive appeal. After rising to womenswear prominence in the 1960s, traditional thigh-high boots have long been marketed as “sexy.” By making them absurdly large and adding an unkempt edge, slouchy boots undermine the gendered associations of their original form.

And sure, there’s an upside to shoes that look like they can eat you whole. I’d like more footwear to double as a secret bunker in emergency situations. Impracticality aside, I can see how they might fit into a celebrity’s lifestyle. Perhaps that’s why Rihanna has long defended them.

In 2018, Y/Project infamously collaborated with Ugg on a presentation that sent models thumping down the runway in boots that crept up to the crotch, with excess material spilling over itself. The collection left the internet divided, and the show was instant meme fodder. Not long after, though, the Fenty Beauty CEO wore the daring design, deeming it actually cool.

But fashionable or not, their wearability isn’t great. They’re super hot. As in, too warm. They’re hard to move around in. They even fall down slightly as you walk. And that’s where I really take issue. With an oversized, beaten-down, wrinkly appearance, slouchy thigh-high boots send a false promise of coziness. If I’m going to walk around in potato sack pumps, I believe I should at least reap the benefits of comfort. Is that so wrong?

Unfortunately for me, such boots are no longer just a fever dream of 2018. New iterations dominate recent designer collections, and Rihanna has yet again given her street-style stamp of approval. Sensing a theme here? These shoes are back, and it should come as no surprise.

After all, the return of XXL fashion has been seasons in the making. Last winter, oversized Y2K Moon Boots made their mark as a celebrity must-have, signalling the demand for chunky cold-weather shoes. In the realm of revived impractical footwear, it seems the Moon Boot walked so the slouchy boot could run — err, trample.

Despite their trendiness, scrunchy thigh-highs reliably leave me confused. But I suppose that’s the whole point. These boots aren’t supposed to make sense, they’re supposed to make a statement. And if the goal is to get me to feel something — be it visceral stress — then mission accomplished, shoes.