The Style Evolution of Aubrey Plaza’s Harper on The White 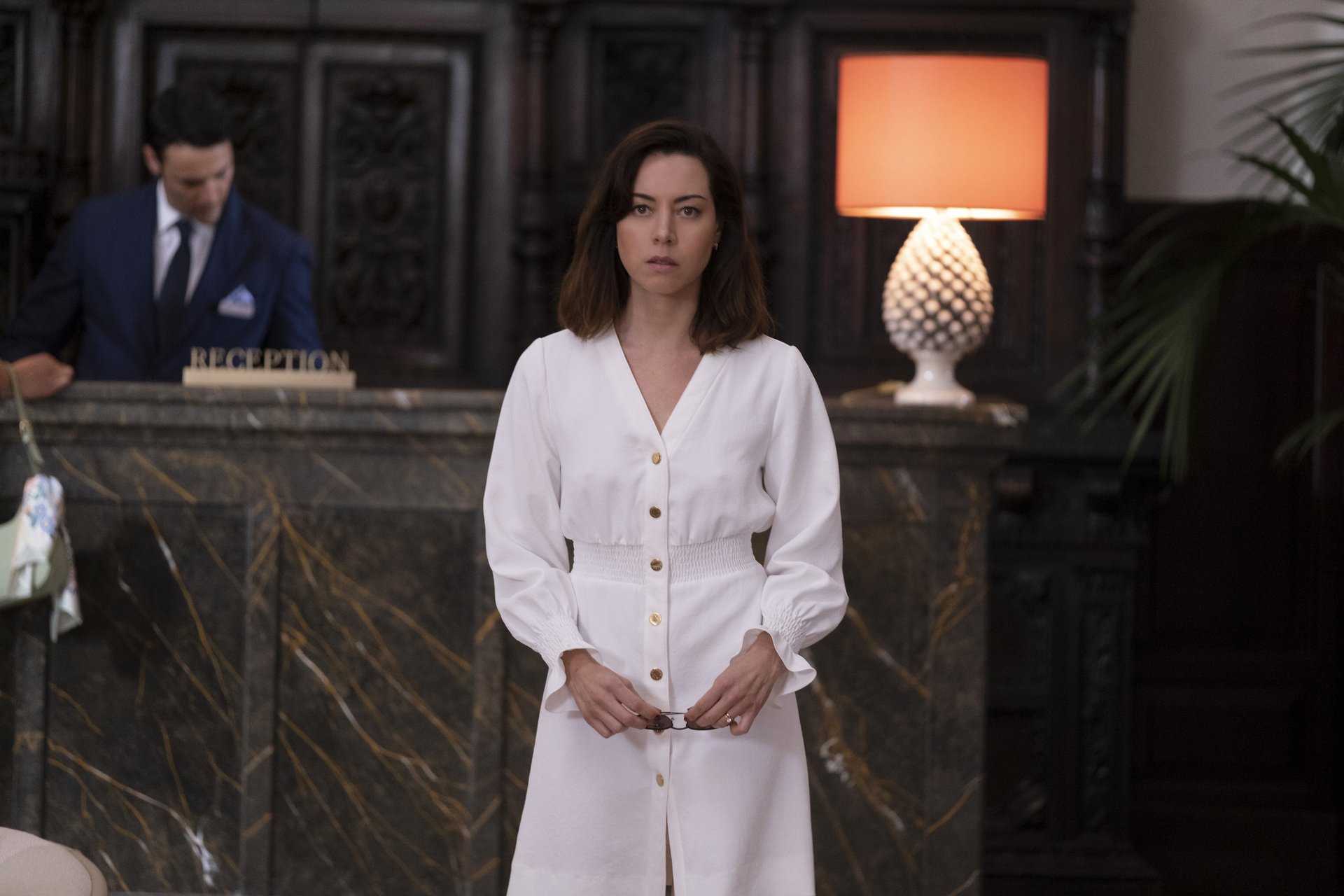 Her wardrobe transforms as she questions her marriage — and her own intuition.

Each episode of The White Lotus is more tense, uneasy, and anxiety-ridden than the last, and no one brings this intensity quite like Aubrey Plaza’s Harper Spiller.

The hit HBO series, written and directed by Mike White, has become known for its clever critiques of wealth gaps, privilege and power dynamics, using all-inclusive resorts as a backdrop. The second season once again follows the twisting storylines of wealthy Americans in a foreign location, this time set in Sicily, Italy. Throughout the show, flashy vacation wear, carefully selected by costume designer Alex Bovaird, is juxtaposed with the dark mood, eerie music and impending knowledge of a fatal ending. Employment lawyer Harper — who undergoes a drastic change in style throughout the season — arguably embodies this foreboding arc the most. 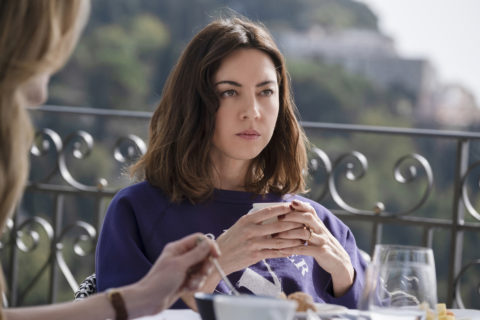 Episode one opens with Harper and her husband, newly minted tech millionaire Ethan (Will Sharpe), beginning their double date vacation with an out-of-touch couple: Ethan’s former college roommate, the conceited finance bro Cameron (Theo James) and his bubbly wife Daphne (Meghann Fahy). Right away, Harper sticks out in the group. Her conservative, sharp, structured ensembles stand in contrast to Daphne’s light, breezy, floral looks — and this is no coincidence.

While Harper’s style is chic and fashion-forward, it portrays her unsubtle anxiety about the trip: she’s uncomfortable with her husband’s newfound extreme wealth, she’s grappling with the lack of passion in her relationship and she’s on edge about the motives of the couple they’re with.

Daphne and Cameron are in a comfortable bubble of privilege: they don’t care about politics, world issues or anyone below their tax bracket. This sense of divide in the group is further felt by the opposing romantic dynamics: Daphne and Cameron have an affectionate, PDA-filled relationship while Harper and Ethan seem to be merely tolerant of one another. 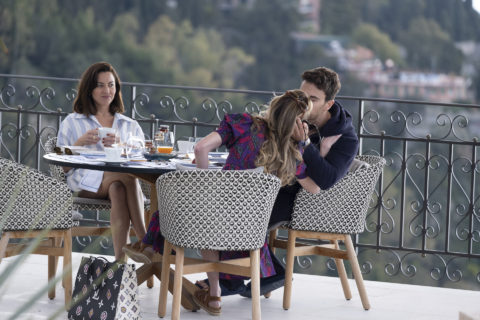 Right off the bat, Harper suspects that something is off about their travel companions — especially Cameron. In the first episode, while borrowing a pair of Ethan’s swim trunks, he strips down naked within strategic eyeshot of Harper. She wonders if this suggestive move was intentional, but when she brings these concerns up to Ethan, he writes them off as cynical and negative, asking her to be less judgemental.

At the request of her husband, Harper makes an effort to be agreeable in episode three. Her attitude switches alongside her style, as she wears a light green dress with her hair pulled back in a silk headband and sticks to surface-level pleasantries. In this preppy, girlish ensemble, she’s suppressing her apprehensive gut feelings. Almost immediately, Daphne compliments Harper on this new look — which is, in fact, not really her. 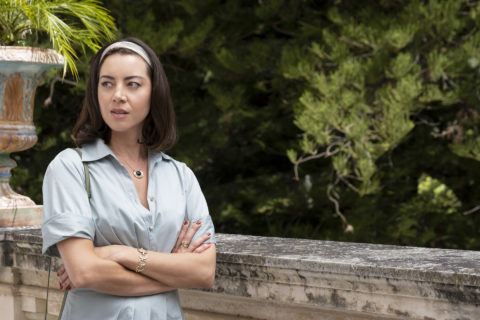 But as the trip continues, she ventures further from her buttoned-up first impression and continues to dress more feminine and playful. It’s no coincidence that this evolution takes place as she spends more time with Daphne while growing distant from Ethan. During a girls’ trip off the resort, the pair bond and Harper even lets her new friend buy her a beach-y, bohemian dress.

On this outing, however, Daphne divulges that she and Cameron aren’t as perfect as they appear. She says they play psychological “games” with one another, implying that they both have extra-marital affairs. Notably, while this conversation is happening, Cameron and Ethan are back at the resort hanging out with prostitutes, whom Cameron proceeds to sleep with. 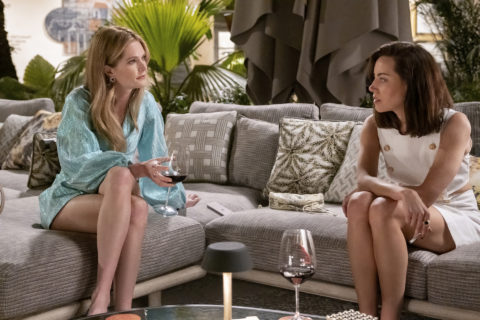 But despite Cameron’s cheating, Ethan won’t tell Harper the full truth about it when asked, leading her sense of worry to spiral. From Daphne and Cameron’s misleading honeymoon-phase marriage to Ethan’s inability to communicate, Harper notices the laissez-faire dynamics of this moneyed group are built on artificiality — so that’s what she starts to give.

Harper begins to put forth a manufactured cheery attitude in the group setting. As such, she goes from being the antithesis of Daphne to almost matching her. This is shown the most when the couples visit a vineyard in episode five, where Bovaird purposely put Daphne and Harper in coordinating high-waisted pants and fitted cropped tanks. Despite carefree appearances, Harper’s suspicion towards the men is still top of mind. 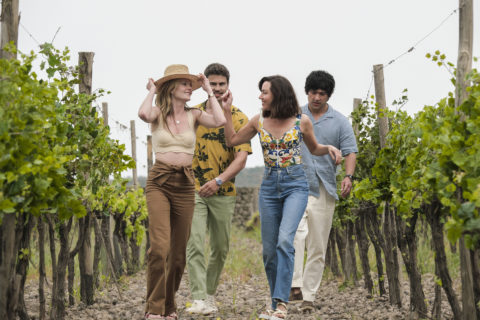 It becomes clear to Harper that the unwritten rules within this wealthy circle are to play along with the illusion that everything is perfect. Case in point: at the end of the episode, Cameron brazenly feels Harper’s thigh under the dinner table with both their spouses present — confirming her initial suspicion about him that was dismissed by her husband.

As she develops an alliance with Daphne while feeling both isolated from Ethan and preyed on by Cameron, Harper’s main conflict is the sense of mistrust about the men around her. This culminates in episode six when she and Ethan are more distant than ever. In her first scene, she confronts him about their non-existent sex life. She says, “You’re not attracted to me,” a statement that he never denies. She asks, “Do you even want me?” prompting him to dance around the question by saying he loves her. 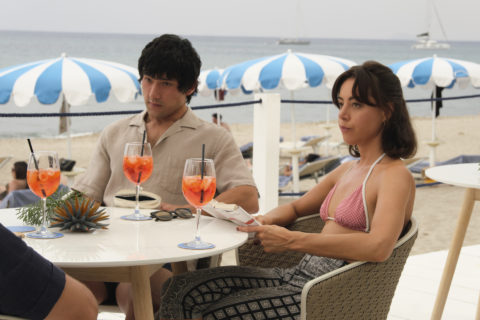 Style-wise, she spends the majority of the episode in a bikini and pink beach cover-up. This stripped-back, sexier side emulates Daphne and further demonstrates her disconnect from Ethan. And as she and Ethan struggle to communicate, she spends the day talking with Cameron. In one crucial scene, they even leave the beach together to go back to their adjoining rooms, forcing Ethan to wonder if she cheated on him with his frenemy, even going into his own spiral of worry.

The truth? Viewers may never know, and that’s the point. As her skepticism evolves, Harper’s style continues to deliver the unexpected. By trading conservative matching sets for ultra-feminine frocks, her manufactured ensembles add to the sense of worry in The White Lotus. What will Harper wear next? We’ll be watching the season finale on December 11 to find out.

“Love Is Blind” Couple Iyanna and Jarrette Just Announced They

Fans Are Calling This Top-Charting Netflix Movie “Powerful, raw and