Vanessa Hudgens Is Her Most Free Self In “Tick, Tick 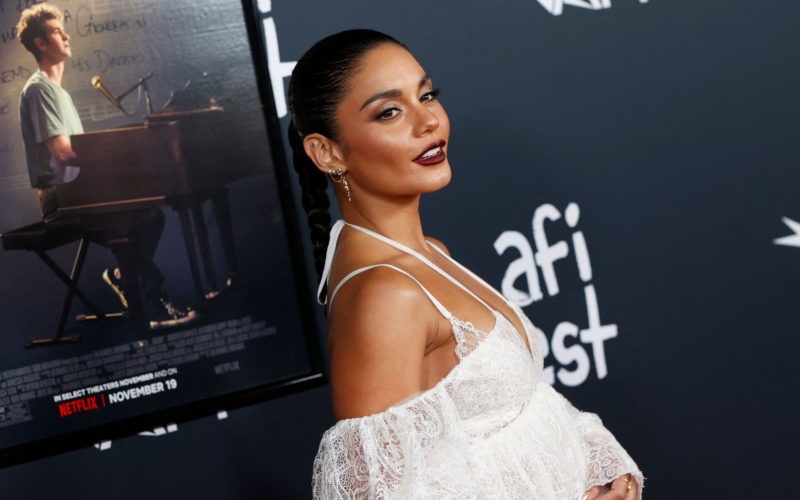 “This is what I love, and I will fight to do it until the day I die.”

When it comes to large-scale musical films, Vanessa Hudgens is a seasoned pro. Since she rose to mainstream fame in 2006 with her lead role as girl-next-door Gabriella Montez in High School Musical, her talent as a bona fide triple threat was made abundantly clear.

With a recent stint in the Savage X Fenty show and upcoming holiday flick, The Princess Switch 3 — which has Hudgens playing all three main characters — the 32-year-old is, to put it lightly, busy. But the feeling of pride behind a project like Tick, Tick… Boom! is something she wants to savour.

“I tell myself that if I do one musical a year then it doesn’t matter what else is happening, because my soul will be full,” she says, smiling over video chat. “It is definitely the thing that I feel the fullest and freest when I’m doing.”

For Vanessa Hudgens, this film is particularly meaningful. It marks the directorial debut of Lin-Manuel Miranda, the playwright behind In the Heights and Hamilton. Further, the story is an ode to Jonathan Larson, the revered writer whose work has inspired a generation of musical theatre careers, including Miranda’s. Larson is best known for writing the revolutionary musical production Rent (Hudgens starred in two separate productions of the famed show). Tragically, Larson never witnessed his work’s success. He lived his life as a struggling artist and died at 35, the night before Rent’s first Off-Broadway preview in 1996.

Tick, Tick… Boom! — in theatres November 12 and available on Netflix November 19 — is an adaptation of Larson’s semi-autobiographical rock musical of the same name. Set in 1990 New York City, it follows the playwright (played by Andrew Garfield) as he struggles to come up with the song needed to complete his dystopian musical Superbia ahead of its first preview in one week. The film reliably switches between two settings: the plot where Larson’s life plays out in real-time as he tries to prepare for the showcase; and a stage performance where he narrates the story while accompanied by two singers, one of whom is his friend Karessa Johnson (Hudgens).

Vanessa Hudgens’ voice is spotlighted best during two pivotal performances. One is the song Larson struggles to write throughout the film and ultimately pens as a heartfelt ballad called “Come To Your Senses.” The other is a playful tune, sung after Larson gets in a fight with his girlfriend Susan (played by Alexandra Shipp — who Hudgens calls her “best friend”). Aptly named “Therapy,” it’s about two young lovers who can’t seem to communicate.

The catchy duet between Hudgens and Garfield is performed with whacky facial expressions, perfectly in-sync movements and comically confusing lyrics. The tempo picks up as the duo chants lines like, “I feel bad, that you feel bad/About me feeling bad, about you feeling bad/About what I said, about what you said/About me not being able to share a feeling.” (Yes, my brain hurts too.)

Hudgens treasures these experimental performances. “It was so cool,” she says. “I remember reading the script for the first time and being like, ‘Oh my gosh, so there’s gonna be this really intense conversation going on. And then this whole glazed-over smile performance, and we’re going to be cutting back and forth.’ It’s such an interesting way to express that moment for these characters.” 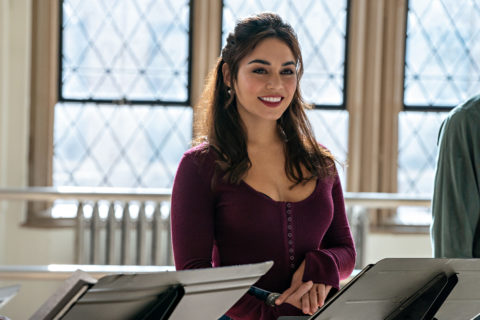 Even in lighthearted scenes, a feeling of anxiety permeates the story. During the week in which the film is set, Larson is about to turn 30, and he laments over his lack of success in the theatre world. A ticking noise fades in and out to solidify the sense that time is slipping away. And while he deals with his own existential dread, the AIDS crisis is simultaneously unfolding around him and killing members of his community — giving the film an even greater sense of urgency.

“The AIDS crisis affected the queer community in such a heavy way, and the LGBTQ community were Jonathan’s closest friends. They’re my closest friends,” says Hudgens. “He made sure that their stories were at the front and center as a through-line of all of his work at a time when it was not fashionable or accepted to be gay.”

Tick, Tick… Boom! is a love letter to fellow artists who understand the struggle of feeling unseen. The late writer’s never-ending internal monologue led him to ask questions that Hudgens says are still widely applicable today. Mainly, she notes, “Am I doing with my time what I should be doing?” 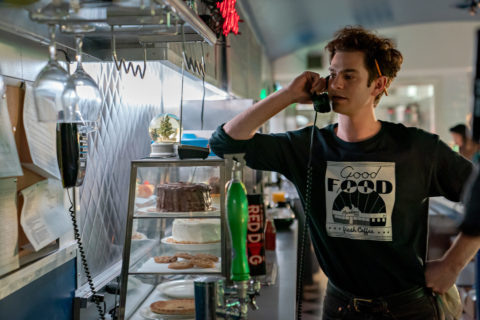 “We all have moments in life where we have a dream and it gets tough, and we need to figure out if we’re going to keep pursuing or if we’re going to jump ship,” she explains. “It’s very universal, especially after a pandemic and us all having more time than we knew what to do with. We all had to look in the mirror and face ourselves in a way that I think a lot of people haven’t had to before.”

Vanessa Hudgens’ passion for musical theatre comes to life with her powerful performance in Tick, Tick… Boom! And while the film honours Larson’s legacy, it poignantly conveys a sense of existentialism that anyone can relate to. As an actor, Hudgens has found success in pushing past these feelings of self-doubt.

“I’m very fortunate to have success at such an early age. But, you know, even that didn’t come overnight. I had been acting since I was like seven years old, and auditioning, auditioning, auditioning and being told, ‘No, no, no.’ As a child, that’s hard to wrap your head around. But I always told myself, ‘It’s okay because the next thing that comes along will be bigger and better.’ And here I am,” Hudgens says.

“This is what I love, and I will fight to do it until the day I die.”