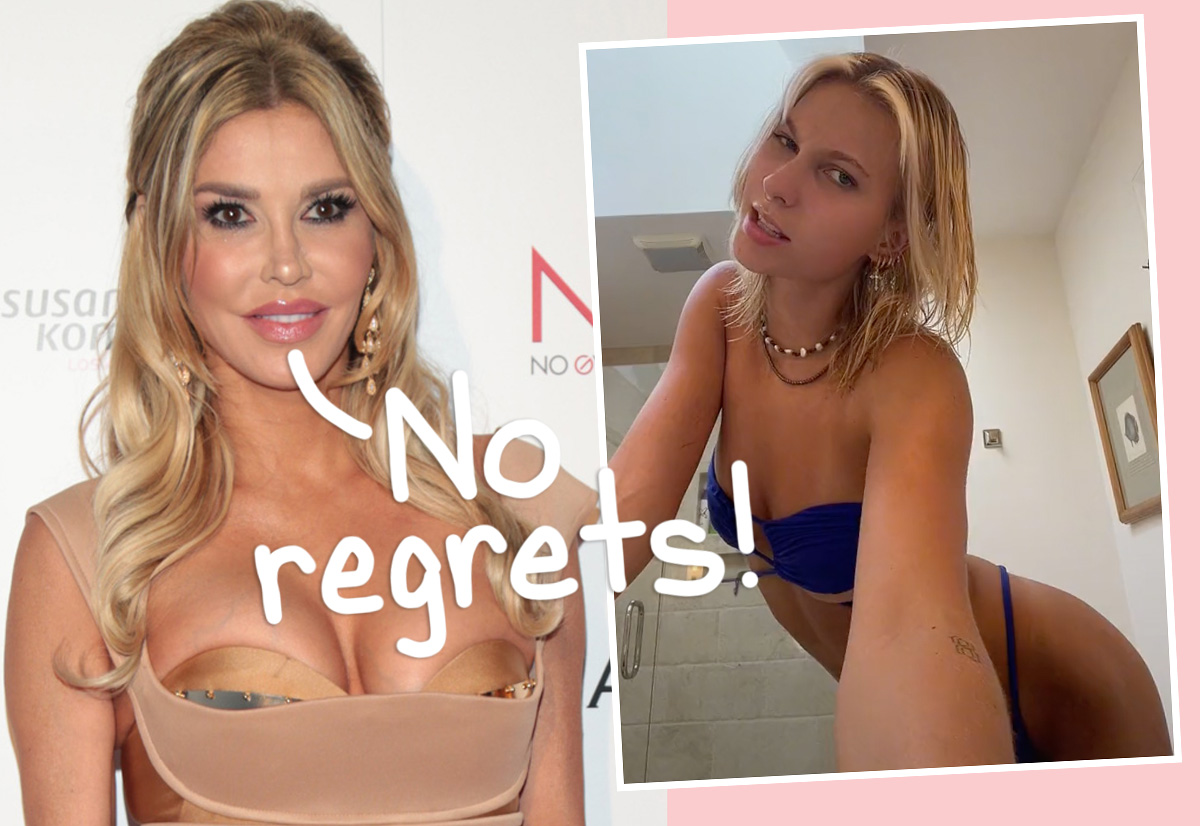 Brandi Glanville is not sorry at ALL about defending her teenage son. And she’s letting the world know it!

The Real Housewives of Beverly Hills alum spoke up about the issue on Twitter on Wednesday. For some, the defense of her kid may seem random, but Bravo fans who knew the storyline were quick to pounce on Brandi’s lack of apology!

Related: Brandi Tells Trolls To ‘F**k Yourself’ After Criticizing Her For ‘Bad Plastic Surgery’!

So, first, the back story. Brandi shares two sons with ex-husband Eddie Cibrian, 19-year-old Mason and 15-year-old Jake. On TikTok, a user named Bella Bernhardt shared screenshots of a purported exchange with the RHOBH vet. In the messages, the 18-year-old blonde can be seen dealing with a very angry Glanville via Instagram direct messages. At issue was an apparent breakup between Bella and Brandi’s son. The boy’s name is redacted in the DM leak, but it’s presumably Mason, considering he is very close in age to the young woman.

Bella’s TikTok post revealing the disturbing interaction has since been deleted, but fan accounts picked up clips before she could scrap it. In one shocking message to the girl, Brandi writes:

“Stop f**king with [son] Bella!!! I’m not f**king joking leave him alone and let him heal and stay in your own f**king room. You don’t get to have your f**king cake and eat it too you think you’re crazy??? you don’t wanna f**k with my crazy.”

The two went back-and-forth from there, with Bella calmly explaining her side of the situation and trying to defuse the incensed 49-year-old’s rage. In one DM, the teenager writes:

“I’m not a bad person. People break up and that is just something he has to deal with, I’ve had to deal with it too and it hasn’t been easy for me either. But me breaking up with [son] does not make me a bad nor malicious person.”

Bella continued to take down the Drinking and Tweeting author, adding:

“I’m not crazy, I’m a very sane person actually so please don’t call me something I’m not. However, you dming your son’s 18 year old ex girlfriend, and threatening her, is. It is also wildly inappropriate, please do not reach out to me like this again.”

In a follow-up message, the Brandi Glanville Unfiltered podcast host appeared to have a change of heart. The Bravo vet claimed her anger had bubbled up after “smoking and drinking at the same time.” Sounding embarrassed, she explained to Bernhardt:

“I don’t even know what I wrote and I’m not gonna look” is kind of wild?!?! Who’s the teenager here??

The screenshots show Bella then apparently blocked Brandi on the social media app. You can see the re-share of Bella’s deleted TikTok clip (below):

But while Brandi appeared apologetic in her final message according to Bella’s post, the Real Housewives Ultimate Girls Trip star is NOT feeling as remorseful now! Late on Wednesday morning, Glanville popped up on Twitter to deliver this protective perspective:

“NOT SORRY!!! Mama Bear to the end. That is all I’m going to say on the subject happy Wednesday”

So much for that whole “please forgive me” vibe from before. In the replies, Twitter users were divided over Brandi’s aggressive DM antics:

“Really inappropriate of you. Let your son grow and handle his own relationships.”

“being a good mom also includes having self control and setting a good example. Aren’t you getting a bit too old for this song and dance?”

“No one would ever be allowed to mess with my son, I will take everyone to the mat. Hurt my kid I hurt you! Super awesome standing up for your son!! You be you!!!”

“Of course you’re not sorry, but I wonder how your son feels. Or does that not matter?”

“Brandi sit down and have a cup of coffee”

Jeez!! What do y’all think, Perezcious readers?? Is the controversial star just missing the drama of reality TV or was her attack on a teen actually necessary? Sound OFF with your take on Brandi’s behavior down in the comments (below)…