‘DWTS’ Recap: A Fan-Fave Is Eliminated & A Top Frontrunner 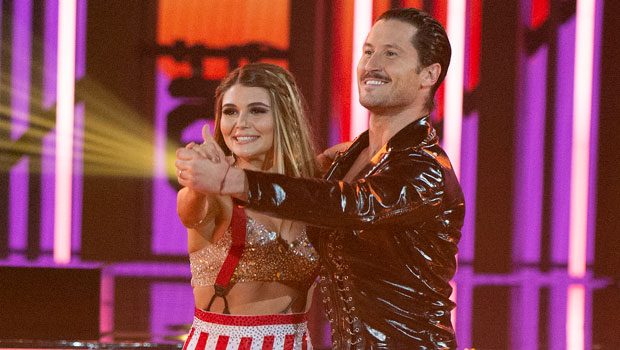 The ‘DWTS’ pairs turned up the heat on Queen Night. A new frontrunner rose to the top of the leaderboard, and the night ended with yet another heartbreaking elimination.

Amanda Kloots and Alan Bersten kick off Queen Night with a fun jive to “Don’t Stop Me Now.” Len Goodman is not a fan of the performance. “You gotta open up more,” he tells Amanda, adding that he really didn’t see “something special” in the routine. Derek Hough says that Amanda is “fantastic,” but he kind of agrees with Len that it “certainly wasn’t” Amanda’s best dance.

On the other hand, Bruno Tonioli thinks Amanda was “so good.” He jumps up on the table. Even with a “slight mistake,” he says the performance was “absolutely brilliant.” Carrie Ann Inaba notes that “everything” Amanda does is “incredible,” but it’s “starting to feel metronomic” when Amanda dances. Amanda and Alan’s scores: Carrie Ann = 8; Len = 8; Derek = 8; Bruno = 9. Total Score = 33 out of 40. 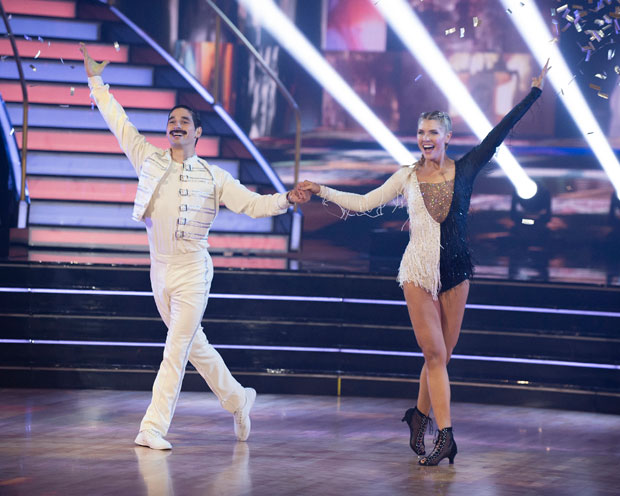 Olivia Jade and Val Chmerkovskiy slay their quickstep to “Fat Bottomed Girls.” Derek raves over the footwork and says Olivia “didn’t miss a step” in this “very challenging routine.” Bruno calls Olivia the “lean, mean quickstep queen.” Carrie Ann points out that Olivia is so light on her feet but uses the floor in a “really beautiful way.” Len gushes that Olivia is “always a joy to watch.” Olivia and Val’s scores: Carrie Ann = 10; Len = 8; Derek = 10; Bruno = 10. Total Score = 38 out of 40.

Iman Shumpert and Daniella Karagach are coming off their perfect score on Horror Night. This week, they dance the Paso Doble to “Another One Bites the Dust.” Bruno says that Iman is now an “accomplished dancer.” Carrie Ann loves that Iman is “so in the moment,” and he’s really elevated the show to a new era. However, she thinks he needs to work on his lines. Len tells Iman that the performance “had attack and it had attitude,” but the dance didn’t “suit” Iman. Derek adds that the performance lacked the power and posture needed in the Paso Doble. Iman and Daniella’s scores: Carrie Ann = 9; Len = 7; Derek = 8; Bruno = 8. Total Score = 32 out of 40. 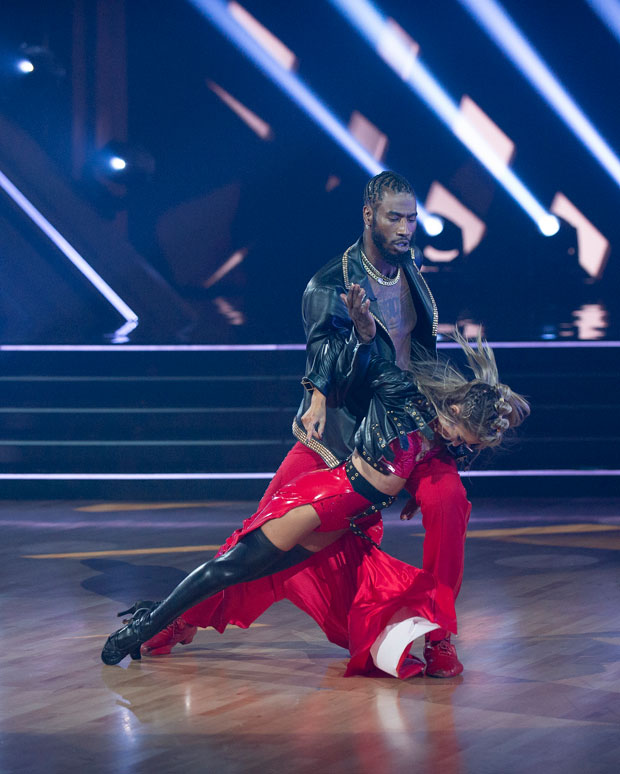 Jimmie Allen and Emma Slater tackle a Viennese waltz to “Somebody to Love.” At the end of the performance, Jimmie went over to kiss his wife! Carrie Ann commends Jimmie for working so hard on his lines. Len says it’s not how you start the competition, it’s how you finish. “You are finishing strong,” Len tells Jimmie. Derek calls the performance “so special.” Bruno raves that Jimmie has turned into a “true leading man.” Jimmie and Emma’s scores: Carrie Ann = 9; Len = 9; Derek = 10; Bruno = 10. Total Score = 38 out of 40.

The Miz and Witney dance the Foxtrot to “Radio Ga Ga” on Queen Night. Derek points out that The Miz’s “rise and fall” in the Foxtrot was “really impressive.” Bruno admits that Miz was a “bit tight at the beginning,” and he wants the WWE star to be a bit more “fluid.” Carrie Ann says she also noticed The Miz’s tension, especially in his neck. She wants him to “just have fun now.” The Miz and Witney’s scores: Carrie Ann = 8; Len = 8; Derek = 8; Bruno = 8. Total Score = 32 out of 40.

Jojo Siwa and Jenna Johnson dance the fiercest tango to “Body Language.” Derek raves over how avant-garde the performance was. He loved every second of it. Bruno calls the performance a “supermodel tango.” Carrie Ann loves that Jojo is growing each week. “You are reminding me of Zendaya!” Carrie Ann says. Len tells Jojo that he loved all of the “lovely, fast, aggressive movements” but wanted to see more lines across the floor. Jojo and Jenna’s scores: Carrie Ann = 10; Len = 9; Derek = 10; Bruno = 10. Total Score = 39 out of 40.

Suni Lee and Sasha Farber dance the Paso Doble to “We Will Rock You.” Right after the performance is over, Suni rushes off stage. She’s apparently having stomach problems. Bruno notes that the synchronization was “fantastic” but points out Suni slipped a bit on her dress. Len thinks Suni did a “sterling job.” While tonight wasn’t her best night, Derek is “super proud” of Suni. Suni and Sasha’s scores: Carrie Ann = 8; Len = 8; Derek = 8; Bruno = 9. Total Score = 33 out of 40.

Cody Rigsby and Cheryl Burke dance an elegant and heartfelt Foxtrot to “You’re My Best Friend.” Len admits that this was “definitely not your worst dance” but not the best. On the other hand, Derek thinks that was Cody’s best dance. He points out that Cody had an “approachable and soft energy” about him. Cody and Cheryl’s scores: Carrie Ann = 8; Len = 8; Derek = 9; Bruno = 9. Total Score = 34 out of 40.

The final performance before the second round of dances comes from Melora Hardin and Artem Chigvintsev. Their Foxtrot to “Killer Queen” is all kinds of regal. Len says the performance was an “all-around polished performance.” Derek gushes that Melora was “just radiant.” Carrie Ann notes that Melora is truly “upping it a notch.” However, she points out something happened right at the end. Melora and Artem’s scores: Carrie Ann = 9; Len = 9; Derek = 9; Bruno = 9. Total Score = 36 out of 40. 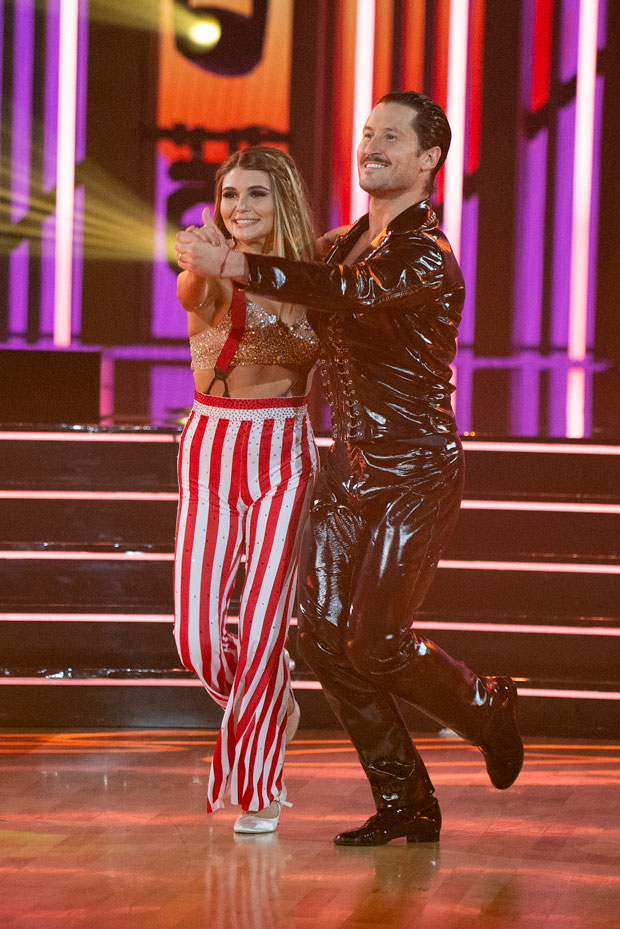 Olivia Jade Sweeps Her Relay Round

Now it’s time for the relay performances. The pairs have been divided into three groups. Each group will dance the same dance, and the judges have one bonus to give away. The first group is the jive relay to “Crazy Little Thing Called Love” with The Miz and Witney, Iman and Daniella, and Cody and Cheryl. The bonus points are handed out as follows: Carrie Ann: Iman; Len: Cody; Derek: Iman; and Bruno: Cody.

Next up is the Foxtrot relay to “Under Pressure.” This group consists of Jojo and Jenna, Olivia and Val, and Jimmie and Emma. The bonus points are handed out as follows: Carrie Ann: Olivia; Len: Olivia; Derek: Olivia; and Bruno: Olivia. Olivia sweeps this relay!

The final group is the Viennese Waltz relay to “We Are The Champions” with Amanda and Alan, Suni and Sasha, and Melora and Artem. The bonus points are handed out as follows: Carrie Ann: Suni; Len: Melora; Derek: Amanda; and Bruno: Melora.

The Miz Is Eliminated

The time has come for tonight’s elimination. The first safe couple is Suni and Sasha. They are joined by Olivia and Val, Cody and Cheryl, Iman and Daniella, Melora and Artem, Jimmie and Emma. The final safe couple is Amanda and Alan.

The bottom two couples are Jojo and Jenna, along with Witney and The Miz. The judges now have to save one of the couples. All the judges choose to save Jojo and Jenna. The Miz has been eliminated.