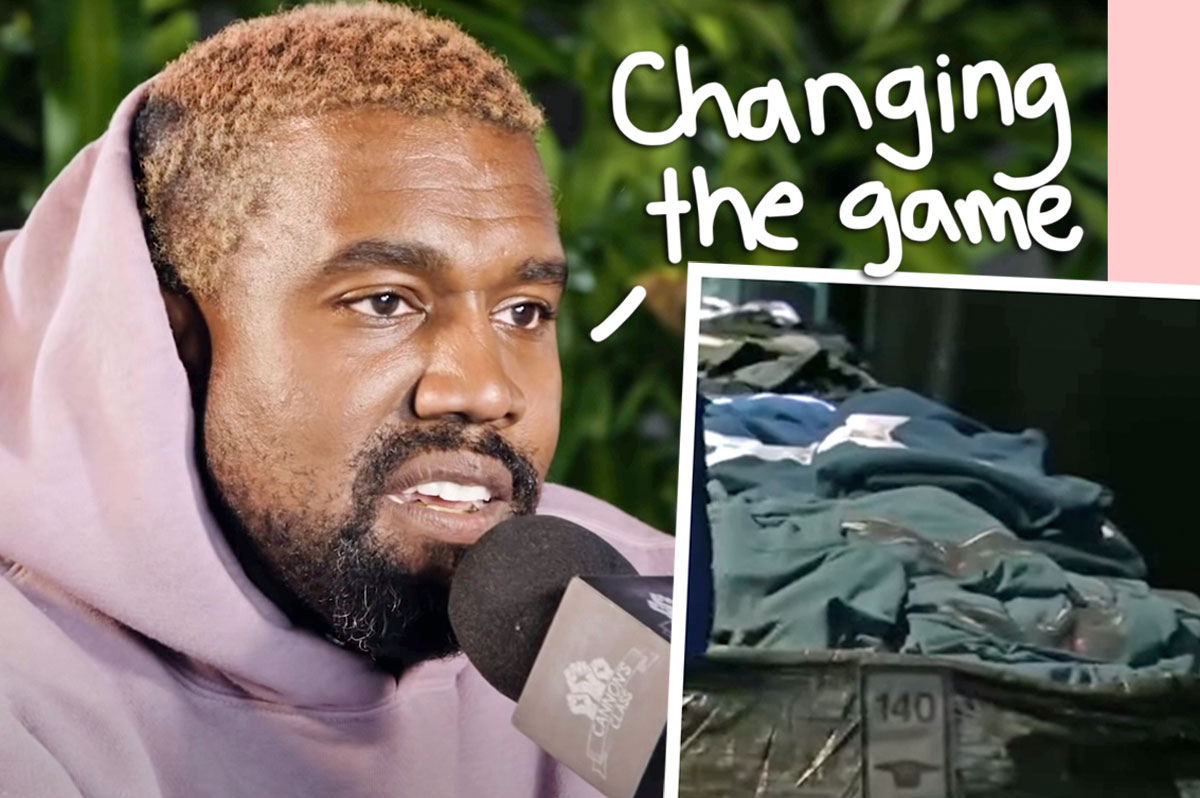 Kanye West ain’t taking s**t from no one!

Hours after the internet lit up with frustrations over the rapper’s new Yeezy Gap collection, he is clapping back and defending his very unique clothing display! As we reported, fans were shocked to learn the designer’s latest collection at the popular clothing store was being sold in large black receptacles that look a LOT like trash bags! Apparently, staffers were also instructed not to help anyone find their size in the massive piles — which is bound to create a mess in the stores and frustration from shoppers!

Take a look at the eye-catching display (below)!

This is how they are selling Yeezy GAP. The sales associate said Ye got mad when he saw they had it on hangers and this is how he wanted it. They won’t help you find ur size too, you just have to just dig through everything pic.twitter.com/GNd08Zv1zC

Can you imagine digging through those bags to find your size?? Such chaos!

While it was unclear why Kim Kardashian’s ex was so adamant about the display, many pointed to a recent (and since-deleted) Instagram post in which he declared he takes his design inspiration from “children” and the “homeless.” Which, you know, would be good if he was donating to those in need and bringing attention to their suffering — instead of just seemingly using their plight as a way to look trendy!

Well, Ye’s not letting the negative chatter plague his new drop for long! On Thursday, the Hurricane rapper appeared on Fox News (?!) to address the controversy and bring some insight into his new clothing launch. While at the Times Square location of Gap, the dad of four argued he’s trying to make clothing less pretentious and more accessible to the masses.

When reporter Eric Shawn asked if he understands why some people feel his decision to put clothing in bags is “insensitive” to “homeless and other people,” Kanye responded:

“I’m an innovator, and I’m not here to sit up and apologize about my ideas. That’s exactly what the media tries to do: make us apologize for any idea that doesn’t fall under exactly the way they want us to think.”

He also insisted people shouldn’t s**t on creators’ ideas because it could make inventors “less brave,” the reporter remarked. A fair point — but when you have the freedom to invent whatever you want and think outside of the box, viewers also have the freedom to express their opinion, especially when they feel the idea has crossed a line.

Related: Is Pete Davidson Sending A Message To Kim With THIS Shirt!?

Funny enough, though, billionaire Kanye isn’t willing to understand why his display might have ruffled some feathers. While he’s not apologizing, he also made sure to point out that the clothes are not sitting in trash bags but in large construction bags! As if that makes much of a difference…

He apparently put them in the big totes so people could informally grab the clothes they want with an overall goal to make life easier. Though that also neglects to consider those with accessibility needs who might not be able to reach into the giant bags to find their sizes – versus pulling it off a rack. Just saying!

Frustrated with the feedback his latest Yeezy Gap collection has received thus far, he mused:

“This is not a joke, this is not a game, this is not just a celebrity collaboration. This is my life. I’m fighting for a position to be able to change clothing and bring the best design to the people.”

And the people seem to be appreciative of his mission — even despite the bag controversy! The new clothes have been widely popular, selling out in multiple locations already! No wonder Kanye doesn’t care about the drama!! He’s getting coin either way. LOLz!

Check out his full Fox News interview (below)!

Reactions, Perezcious readers? Do you think Ye’s display was as insensitive as the internet does?!