Kim Kardashian & Pete Davidson Got Close While Kissing For 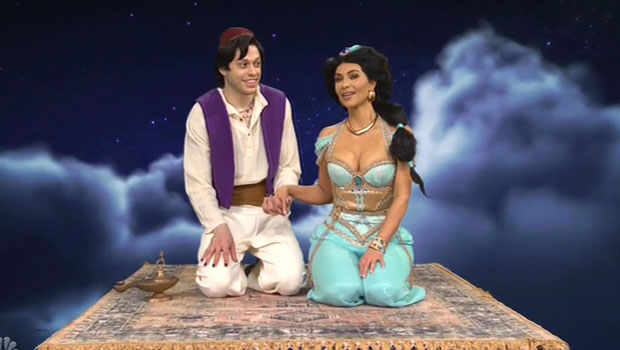 After rehearsing kissing & hand holding for an ‘SNL’ skit, sparks began to fly between Kim Kardashian & Pete Davidson, with a source reporting how the two are getting more serious.

Could a romance between Kim Kardashian, 40, and Pete Davidson, 27, be heating up? That’s what fans are wondering, as the potential couple was recently spotted hanging out at Knott’s Berry Farm in California, cozying up on a roller coaster together. According to a source close to Pete, the comedian became “better friends” with Kim while working on that hilarious Aladdin skit for Saturday Night Live with the KKW beauty founder. The pair had to kiss for the skit, and apparently, practicing all week “really brought their connection together faster,” the source EXCLUSIVELY shared with HollywoodLife.

“They were having a good time — you could see that there were sparks,” the source revealed. “You can tell they became quick friends while she was on the show.” The insider shared that while the pair isn’t “officially boyfriend and girlfriend” just yet, there is “an attraction” between them and they’re “weighing the options” of pursuing a full-blown romance. 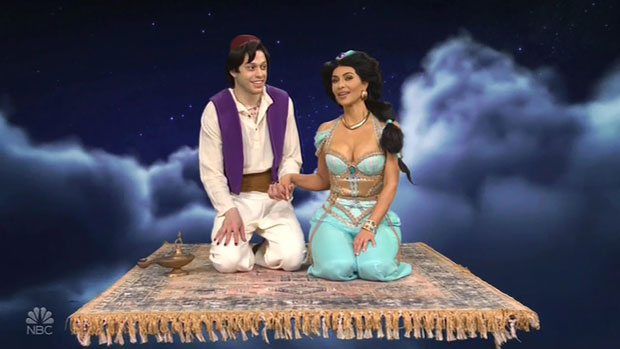 Pete Davidson & Kim Kardashian play Jasmine & Aladdin in a recent ‘SNL’ skit. (NBC) “After [the] Halloween excursion, the talk of them being a little more than just friends seems to be gaining traction,” the insider spilled of Pete and Kim, noting how much the relationship is already starting to build.

The SKIMS founder is going through a divorce from Kanye West, 44, after seven years of marriage, although the two have remained publicly amicable with Kim attending Kanye’s Donda listening events. Pete, for his part, has been seemingly single since his split from Bridgerton actress Phoebe Dynevor, 26, in August. Although a second source recently told HL that Kim and Pete were “just friends,” fans may be reminded that Kim and Kanye were friends for years before starting a romance in 2012 and then marrying in 2014.