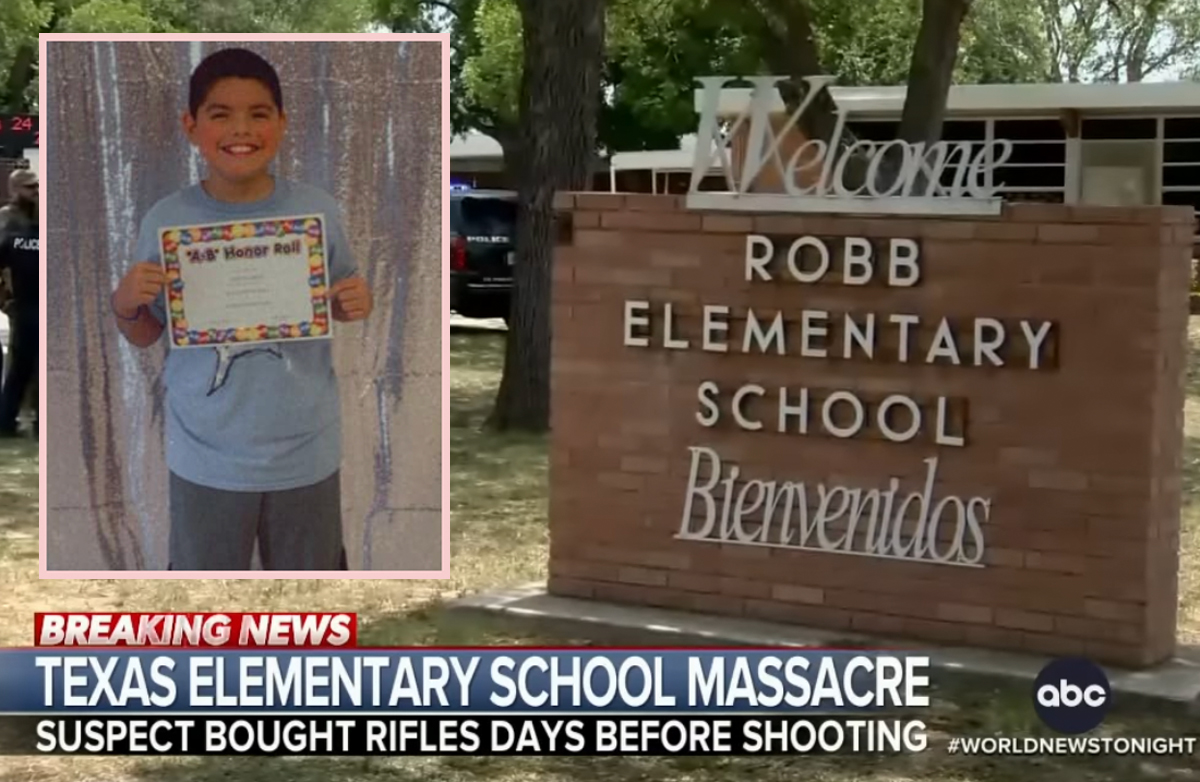 We cannot imagine how this family must have been feeling…

As we’ve been reporting, 19 students and two teachers tragically lost their lives earlier this week when an 18-year-old gunman entered Robb Elementary School and horrifically shot them. Since the horrific shooting, several families and survivors have come forward with their heartbreaking stories about their loved ones who died in the attack – including the family of fourth-grader Jose Flores.

According to The Daily Beast, the 10-year-old had been pictured proudly holding up an honor roll certificate that he had received during an academic award ceremony hours before he was killed in the massacre. Jose was wearing a blue t-shirt in the picture, which was used to identify his body. However, his uncle Christopher Salazar revealed to the outlet that he was identified only AFTER they initially told the family he was still alive.

So awful. Speaking with People, Salazar recalled that he had heard the gunshots from his house down the road and immediately rushed over to the school. When he arrived at the scene, he saw police officers waiting outside and keeping parents from heading into the building. Salazar said:

“I saw people yelling and going crazy looking for their kids.”

Once the little boy’s father, Jose Sr., got word of the shooting, Salazar told The Daily Beast that he left work to head to the school, too. And like many other families, the two men started frantically searching for their loved one, but they could not find Jose anywhere. According to the uncle, law enforcement was not helping them at all and repeatedly told them that he had been on a “bus,” explaining to People:

“The cops kept on saying he was on the bus. He was on the bus. We went looking for the bus. We did not find the bus. We never saw him. We were praying and praying. I saw a little kid, it looked exactly like him, with a cap on. It wasn’t him. And that’s what made me more sad, because that was the last bus.”

Salazar went on to look for Jose at several local hospitals and the police station, but still, no one knew where he was. Eventually, authorities came up to Jose Sr. and asked him to reach out to another family member who could be with him before they shared an update. When Salazar met up with the dad, that is when officers informed them of devastating news. He shared with The Daily Beast:

“They finally told him, ‘Look, are you OK to hear what I have to tell you? No, he did not make it.’ They lied to him. They wanted some family members to comfort him while they told him his son was gone already. I got into an argument with the cops in there. I said, ‘I don’t care if you lock me up or whatever. You lied to him. Telling him he’s alive, he’s alright…’”

After the pair were made aware of Jose’s death, authorities also warned them not to see the body. Salazar said:

“We couldn’t hold him or hug him or nothing. They said it was too ugly. His body was supposedly torn to pieces. The only way they identified him was because of his clothes and a scar on his left foot.”

We cannot even imagine. And now, like many other people, Salazar is enraged over the response and negligence from the police at the scene – especially as more accounts detailing the complete lack of action taken by officers while the shooter was inside the building for 40 minutes of an hour come out. Additionally, Steven McCraw of the Texas Department of Public Safety later confirmed that there had been 19 cops waiting in the hallway who did nothing to save the kids inside the classroom. Salazar expressed to People:

“They didn’t even protect him. They had all these officers be there and none of these officers went in. The cops here, they were all [too] scared to go in there.”

Even more so, he believed that if law enforcement had actually did something sooner, his nephew might have been still here:

Our hearts just break for this family. We will be keeping them in our thoughts during this difficult time.

So Many Johnny Depp Fans Are Bullies! Attacking Me! |

Masaaki Yuasa’s Inu-Oh Gets U

Manifest Spoilers: Everything We Know About Season 4!

Here Are the Most-Replayed Scenes in Guns N’ Roses’ ‘November

Regina Hall Wore 8 Looks to the Oscars—See Them All

What Red Dress Day is All About