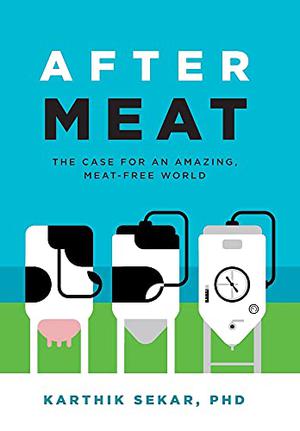 When most people think of technology, they probably don’t think of animals. However, like the wheel, the plow, or the sail, the cultivation of animals for their valuable resources has been one of humankind’s key technological advances. Today, domesticated animals provide people with food, various materials, cosmetics, and pharmaceuticals—though not without a cost, and animals happen to be incredibly inefficient tech that doesn’t offer progress: “All indications suggest that the future of food will ultimately be tastier, healthier, cheaper, kinder, and better for the environment,” the author says. “This will happen because we won’t use animal products.” Rather than making an argument based primarily on ethical or health concerns, Sekar walks readers through all the ways that raising animals on an industrial scale is technologically outdated. Advances in biochemical technology, he notes, mean that people can make anything that animals can by using organic compounds found in plants, fungi, and microbes. What’s more, he adds, it can be done in a way that helps to alleviate global problems, such as water and food insecurity, poverty, and climate change. Along the way, Sekar locates this coming “alternative food revolution” within the larger sweep of history, from humanity’s evolution as a species to the beginnings of agricultural society, industrialization, and the current climate crisis. In addition to predicting the many ways that humans will phase out meat in the near future, he offers advice for readers who are looking to become meat-free right now.

Sekar’s book is not a traditional treatise on the evils of meat. His writing style is arrestingly matter-of-fact, as in this passage, in which he asserts how his own views are quite different from those of some other anti-meat thinkers: “Vegans and vegetarians are…more likely to buy something only if it’s organic or all-natural. I dislike this. I’m unfairly lumped in with these groups when I wholly disagree with many of these ideas,” which he then discusses in detail. The author has a background in biochemical engineering and systems biology, and his prose can be fairly technical, though not so much that the layperson won’t be able to follow along. He’s certainly done his research; the endnotes take up 70 pages alone. However, Sekar takes the book in unexpected directions, devoting entire chapters to such ideas as morality and the very nature of knowledge. This is sometimes to the detriment of his overall message, as when he ends with an extended digression on the concept of the multiverse. Even so, the book’s left-brained approach to its subject means that even longtime meat skeptics will learn something new to bolster their argument. The book’s greatest strength is that it places meat consumption not only in an economic and nutritional context, but also in the larger context of human life, presenting a no-meat future as just the latest in a long line of tech upgrades.

An idiosyncratic and often engaging look at how meat isn’t cutting it.