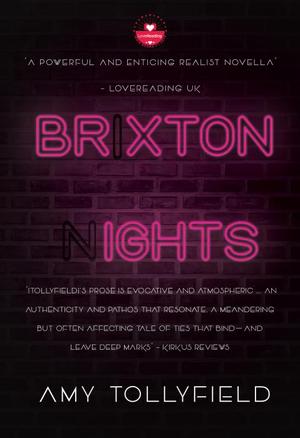 An English lesbian struggles with her conflicted love life and fractured family in this coming-of-age novella.

Christina is a 35-year-old soft-drink factory worker living in the English town of Hull, where she trolls lesbian bars for short-term hookups and pines for her ex-girlfriend Steph, who left her for a man. Christina’s psychologist encourages her to ask out her fetching, bisexual co-worker Siobhan, who proves ready and willing. But Christina repeatedly pulls back from their make-out sessions because of a mountain of emotional baggage. She unpacks this baggage in alternate chapters looking back on her fraught past, starting as a child living in London’s Brixton slum in the 1990s with her younger brother, Kyle, and her Mum, a charismatic but unstable single woman given to unsavory men, booze, and cocaine binges. Social workers intervene, and Christina and Kyle end up adopted—along with two Black siblings—by Simone, a woman living on her own but supported by her estranged husband, who lives in Norway. Simone is a bundle of contradictions, a compulsively giving woman and a Christian church member who frowns on nonstandard sex lives but gets involved in an extramarital affair. Friction ensues over Simone’s attempts to make over the tomboyish Christina in girly clothes and, later, to derail her budding teenage lesbianism—along with smoking, drinking, and minor delinquency—by way of a Christian therapist. Kyle embarks on major hooliganism, including fire-starting, progressing to serious drug addiction in adolescence. As the present and past storylines head toward a convergence, Christina, now under Covid-19 lockdown, tries to bond with Siobhan and reconnect with Simone while ruminating on Steph, Mum, and other lost relationships.

Tollyfield’s melancholy novella delves into families that don’t fit well together—flesh-and-blood ones full of florid problems and, even more, put-together clans whose members chafe but strive to get along as the best option among bad ones. Christina finds herself caught between that yearning for connection and the wariness at the hurt that can flow from it. There’s a kitchen-sink drama vibe to the somewhat shapeless narrative, with characters muddling through as dysfunctions and emotional funks wax and wane amid much therapeutic dialogue. At one point, a therapist advises Christina: “ ‘Family events and the sort of trauma you have been through may never fully heal,’ she counselled…‘learn to channel it appropriately and in the least painful way possible, rather than having the pain channel you.’ ” Fortunately, the author’s prose is evocative and atmospheric in conveying Christina’s life, split between half-desperate pleasures—“Most Saturdays I’d be back in the toilet cubicle of some dirty nightclub, pleasuring a girl against the cubicle door”—and tense alienation. (“He would watch me sometimes, let his eyes bore into me, made sure I registered his disgust. Men would do this often in my life, or else impose themselves in my space so easily and so dominantly that I was forced to acknowledge their presence, forced to accept their physical superiority. It was hard to stomach—men behaving like that around me—but harder still to try to change.”) Christina’s prickly uneasiness in her own skin—and sadness at the gulf that opens between her and others—gives her travails an authenticity and pathos that resonate.

A meandering but often affecting tale of ties that bind—and leave deep marks.

8 French Outfits We Plan on Re-Creating for Autumn

What Anne Heche Said About Dating Ellen DeGeneres In Her