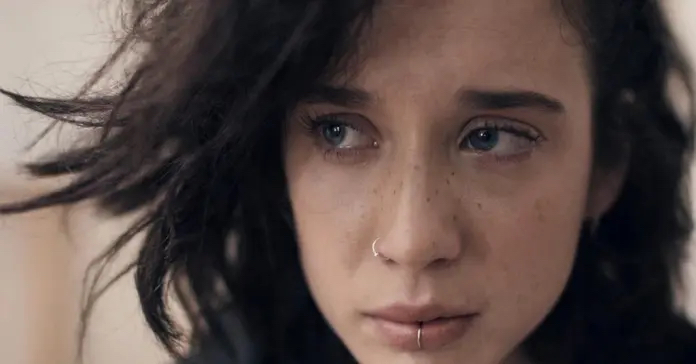 Remember those early days of the lockdown, when no one really knew what was happening or how to cope with the world’s sudden state of isolation? Luckily, this pandemic happened in 2020, when most of us had steady Internet access and a reliable way of communicating with our friends and family, no matter how far away we were from each other. To combat the inevitable boredom and loneliness that quarantining caused us, many of us also turned to dating apps to pass the time (and maybe find that special someone).

In Ego, a young woman does just this. But instead of finding a love connection, she finds a woman who looks exactly like her. Soon after swiping right, her entire world turns upside down.

The protagonist, Paloma (played by María Pedraza) lives with her mother (Marian Álvarez) in an apartment in Madrid. Paloma doesn’t have a job and doesn’t seem to be in school. We learn that her father recently died by suicide and that Paloma herself struggles with her mental health. Paloma only seems to talk to a few people: her mother, her best friend Jorge (Pol Monen), her psychiatrist (Alicia Borrachero)… and the random women she connects with on a dating app.

When Paloma finds a user on the app that looks identical to her, she swipes right to match, thinking she’s about to bust a catfisher using a photo of her. Instead, she ends up chatting with her doppelgänger (played by Pedraza in a double role). Over the course of one week, Paloma’s mental health spirals as she finds herself becoming the target of vicious harassment, stalking, and identity theft.

Written by Jorge Navarro de Lemus, Ego‘s story has a lot of strengths. María Pedraza’s portrayal of the tortured, traumatized, and mostly-closeted Paloma is sympathetic, nuanced, and entirely believable. Her performance as Paloma’s evil double is horrifying in a calculated and ice cold way. Pedraza plays both characters with finesse and just the right amount of playfulness. The scenes that Pedraza and Álvarez share as on-screen mother and daughter are equally strong. While some scenes between the two are in the film for purely expository reasons, others are deeper, more intimate, and utterly heart-wrenching.

Although Ego is skillfully directed by Cortés-Cavanillas and its dialogue is strong, the film has a major problem. All of the action—which includes the protagonist meeting her doppelgänger, being victimized in a pre-meditated way, and having a severe mental breakdown—happens over the course of one week. This isn’t even a detail that we can ignore, because the film is broken up into seven parts. Because of the set-in-stone time frame, the film’s pacing is much too quick. The action, not to mention the emotionally raw scenes between Paloma and her mother, is rushed. It takes the audience out of the realm of the movie and diminishes the impact of the climax.

That’s really a damn shame, because the climax is beautifully chaotic.

Ego had its world premiere at Brooklyn Horror Film Festival 2021.

Skillfully directed by Alfonso Cortés-Cavanillas, Ego offers a heart-wrenching exploration of its characters’ fraught relationships. But the film’s hurried pacing lessens the power of its otherwise thrilling climax.