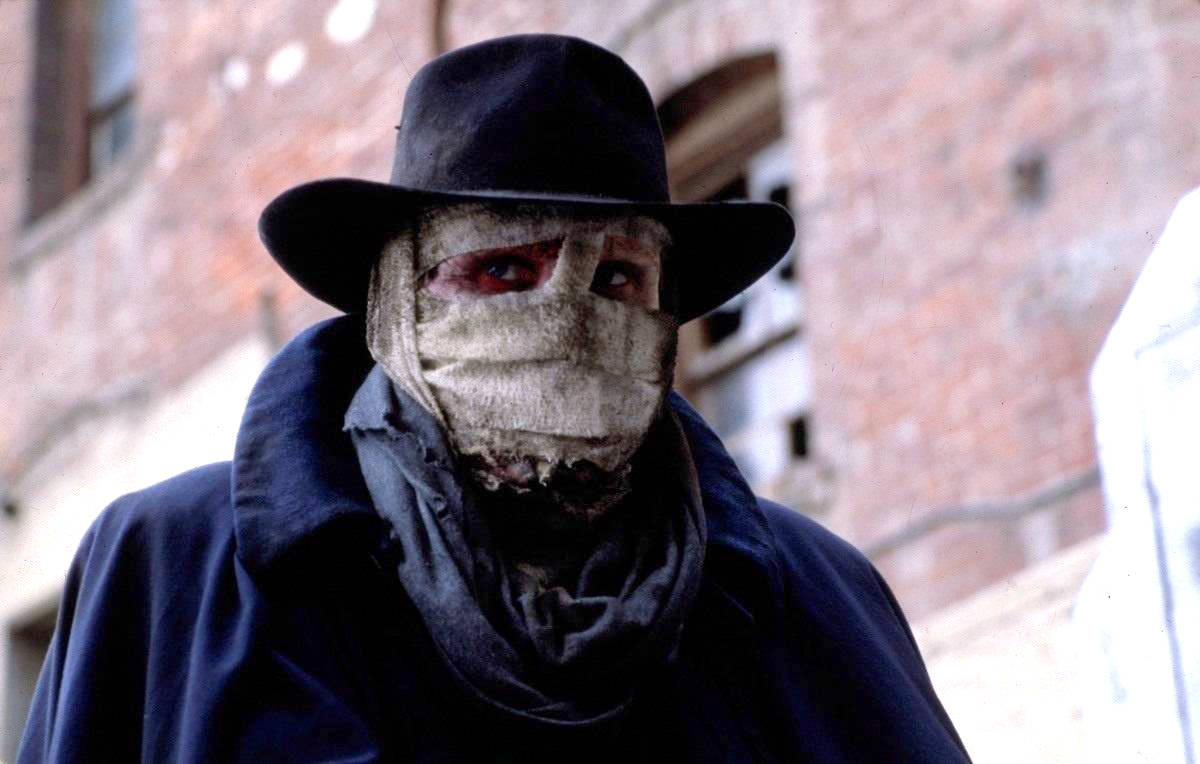 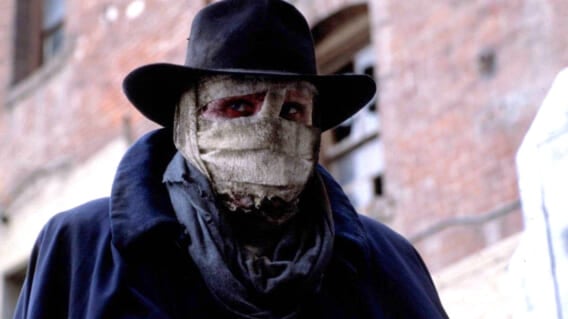 Very few modern filmmakers, even amongst the legendary, boast as varied yet successful a career as Sam Raimi. Could audiences have imagined after watching The Evil Dead, a gruesome micro-budget gorefest that features a woman being sexually assaulted by a tree, that the same young man behind that film would go on to bring Spiderman to the big screen? That he would helm one of the most generation-defining and critically-lauded blockbusters in recent memory? That he would help usher in a new wave of comic-book-based franchises that would completely dominate the box office?

Of course, most fans will celebrate him for both his Evil Dead franchise and Spiderman trilogy (even this writer will defend Spiderman 3). But there’s one criminally overlooked film in the director’s oeuvre; one that would perfectly bridge the grisly, blood-soaked grindhouse sensibilities of The Evil Dead with the pulp, comic book stylization of Spiderman. And that film is none other than 1990’s Darkman, Sam Raimi’s wonderful send up to pulp magazines and Universal monster movies. Starring a pre-fame Liam Neeson in the titular role, Darkman was Raimi’s first studio film. It would go on to be a modest hit, grossing almost $50,000,000 against a $14,000,000 budget.

Darkman is about Dr. Peyton Westlake, a noble scientist played by Liam Neeson. Westlake is working on developing synthetic skin in order to help burn victims hide their scars. But in an ironic twist of fate that could only be dreamed up by a Hollywood screenwriter, Westlake is himself disfigured by sadistic mobsters out to secure documentation that was procured by Westlake’s girlfriend, district attorney Julie Hastings (played by a pre-Fargo Frances McDormand). Thought to be dead, Westlake undergoes an experimental surgery that cuts off his nerve endings so as to not feel the pain of his burns. But it also gives him uncontrollable surges of adrenaline that dangerously heighten his emotions. Thus, he uses his synthetic skin and newfound “superpowers” to seek revenge, becoming the vigilante known as “Darkman.”

Damn, does that sound cool or what?

Again, Darkman is an original character created by Sam Raimi and his brother Ivan. Sam Raimi had wanted to direct an adaptation of either Batman or The Shadow, but couldn’t secure the rights. So, he invented his own character. Darkman would be greenlit after the runaway success of Tim Burton’sBatman. But it instantly stood out due to its shocking (and sometimes hilarious) violence, its tragic anti-hero, and Raimi’s wildman cinematography. 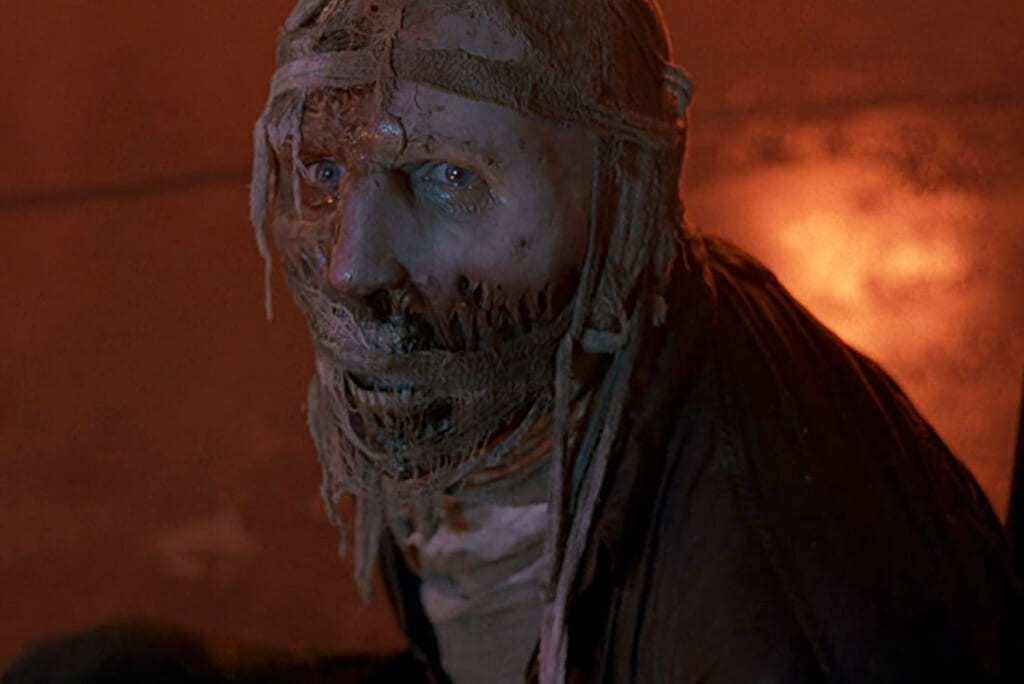 Despite Darkmanbeing a critical success that launched Raimi’s career as a blockbuster filmmaker, it doesn’t have the stature of his other films. While The Evil Dead is still an extremely lucrative franchise that’s had a film trilogy, reboot, and three-season television show, Darkman’slegacy is two Neeson-less straight-to-VHS sequels in the mid-90s, neither of which I could recommend in good conscience. As far as its place in history, Darkman mostly seems like a launching point for several careers, especially Liam Neeson.

And it’s not exactly surprising, given how unique and genre-bending Darkmanis. It’s too macabre for the Spiderman crowd. I can attest to that. I was five when I first saw it, and couldn’t believe that the same director who made Spiderman also made a movie that opens with the main villain cutting off a man’s fingers with a cigar-cutter.

But on the flip side, Darkmanprobably has too much studio influence and formulaic storytelling to satisfy fans of The Evil Dead. Raimi deliberately toned down his style to focus more on the character of Darkman and show his tragic arc from a benevolent scientist to a vengeful creature of the night. And considering how troubled the production was, with editors quitting after a nervous breakdown and Raimi going rogue to re-edit the movie himself, it’s surprising that Darkman isn’t an unsalvageable mess. Without Raimi’s sharp, laser-focused storytelling and Neeson’s committed performance, it could’ve tanked careers instead of launching them.

But Darkman is so adept at blending and subverting genre conventions, and so sincere in its storytelling, that it transcends these issues to become one of the most special films in Sam Raimi’s catalog. And I don’t say that lightly. The issue is, there’s a misconception surrounding Darkman that sets up the wrong expectations and almost certainly promises disappointment.

No matter what anyone tells you, Darkmanis not a superhero movie. Yes, Darkman wears a “costume,” the same way the Phantom of the Opera wears one. Yes, Sam Raimi invented Darkman because he originally wanted to direct Batman. But if there’s a Batman storyline where the Caped Crusader violently murders a low-level gangster by shoving him up a manhole to be squished by on-coming traffic, I’ve yet to see it. Though I desperately want to.

Some critics at the time thought Darkman was simply riding the waves off Batmanand Robocop. But either through mischievous subversion or accidental genius, Raimi ended up deconstructing the superhero archetype and made a covert monster flick. Only, this monster terrorizes deranged mobsters instead of innocent villagers. And instead of the angry mob with pitchforks, this monster has to fend off the likes of Larry Drake swinging him into skyscrapers with a helicopter. That is still one of the most underrated set-pieces of the ‘90s, and a perfect example why Raimi was just the guy for the job to adapt Spiderman.

If there’s any superhero that’s comparable to Darkman, it’d really the Punisher, who also has no qualms about murdering criminals and dealing out lethal justice. But Marvel still sees it fit to put the Punisher alongside Iron Man, Captain America, and other less ambiguous heroes, ultimately endorsing the character as a force of, let’s say, net good. But, despite what the trailer says, Darkman isn’t “justice with a new face”. Part of that is the cinematic language Raimi employs. Darkman’s costume, a trenchcoat and bandages, evokes other mad scientists such as The Invisible Man. Darkman is shot with heavy use of shadow, except for his “freak-out” scenes that descend into carnivalesque mania. For these scenes, Raimi uses everything from snap-zooms, bizarre cut-aways, and fiery visuals to communicate how far Westlake has descended into madness.

But there’s also the fact that Darkman is simply a film without heroics. Aside from Julie, Darkman literally never saves anybody throughout the film. He’s a sympathetic character, tragic even, but Darkman hasn’t improved the lives of anyone he comes across. The brilliance of Darkman is that our monster starts as a hero, and then succumbs to evil. When the evil real estate tycoon, Strack, is about to be killed by Darkman during the climax, he challenges Darkman’s morality. He says, “if you kill me, you’ll be like me but worse”. Then, he sneers and boastfully says, “you couldn’t live with yourself”. Darkman pauses, thinks, and drops Strack off the top of a skyscraper. And in one of the film’s most chilling moments, he simply responds, “I’m learning to live with a lot of things”. No, Darkman isn’t a superhero origin story. It’s a supervillain’s origin story.

Liam Neeson ended up beating out the likes of Bruce Campbell and Bill Paxton for the role. Evil Dead fans are surely disappointed that their favorite chainsaw-handed boomstick-toting anti-hero doesn’t have anything more than a cameo in Darkman. But it’s hard to see anybody else in the role besides Neeson. Far from his stoic bad-asses with “a certain set of skills,” Darkman is an emotional hand-grenade of character, and the audience sees Neeson delivering some of the most explosive acting of his career. But he also grounds the film in a certain psychological reality. While Darkman has its share of Sam Raimi zaniness and outrageous moments, Neeson always takes his tormented anti-hero seriously and plays the character with the dedication and gravitas of a true thespian.

So, to the uninitiated, please don’t walk into Darkman expecting a prototype to Spiderman or a spiritual successor to The Evil Dead. Raimi’s stylistic fingerprints are all over it, yes. But, he wisely put the eponymous character front and center and created one of the most original and tragic anti-heroes of his career. Nobody’s sure if Sam Raimi and company will revisit Darkman. But Neeson recently said that he would “be very interested in reading the script”. And there are other filmmakers looking to revitalize the disfigured anti-hero, namely Werewolves Within director Josh Ruben.

But no matter what, reboot or not, we’ll always have the original Darkman to remind us of the power in taking creative risks with new ideas instead of adapting proven IPs. Perhaps Darkman is never really gone. Perhaps he’s just lurking within the cinematic shadows, faceless and nameless, waiting for the perfect moment to strike again.