‘Do Not Disturb’ Is Finger-Licking Good Cannibal Horror [Popcorn Frights

Come for the pettiness, stay for the carnage. 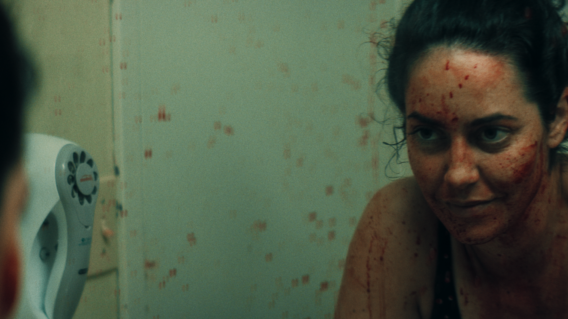 We’ve all known at least one toxic couple in our lifetime. Hell, a lot of us have been that toxic couple. It’s a thing of twisted comfort, a coupling that is exhausting but familiar. You emotionally feel like you’re getting eaten alive. Director John Ainslie has rendered that experience into flesh with his new cannibal dark horror dramedy, Do Not Disturb, which had its world premiere at Popcorn Frights.

Chloe (Kimberly Laferriere) and Jack (Rogan Christopher) are a recently married couple who head to Miami for their honeymoon. But they really aren’t happy to be here. From the get-go, they both seem absolutely miserable to be in each other’s presence. They pick at each other about money, how the hotel is adults only, partying, everything. It’s quickly revealed this is more of a marriage of convenience and pity. They’ve been together for years and Chloe was pregnant but lost the baby. So getting married should have fixed things, right?

One day at the beach, a strange man very high on drugs throws peyote at their feet and walks straight into the sea. Jack snatches it up, declaring he’ll sell it so they can get a nicer hotel room. This launches another argument that ends with them taking the peyote. From this point on, things descend into a bloody, visceral hell.

They blackout for long periods of time and awake to a nightmarish crime scene, where they’ve devoured a fellow guest in a fit of feral carnality. They lose total control of themselves, at the mercy of whatever psychedelic influence they’re under. Chloe leans into this, reveling in her animalistic desires, while Jack flinches at what this brings out in her.

Chloe and Jack are both pretty deplorable characters and that’s made apparent from the start. They both have said and done harmful, abusive things to one another out of anger. Ainslie never once tries to paint Chloe as the hero, but rather the character that embraces her own toxicity. She’s hard to root for but you still love her arc.

That being said, I did want more about Chloe’s transgressions. At one point at the beginning of Do Not Disturb, she reveals a dark secret to Wendy (Janet Porter), a woman she met in the hotel lobby. It’s a rather substantial reveal but it’s never revisited again. Arguments felt repetitive and I found myself begging them to just eat each other already.

But once the blood starts to flow, it doesn’t really stop. Chloe rips and chews flesh while moaning in pleasure. A man sobs while cradling his wife’s severed arm. It’s darkly hilarious. A man loudly declared, “what the fuck” towards the end of the film. That alone is a testament to how visceral the film is.

Do Not Disturb starts out as a romantic comedy and ends as a “good for her” horror movie. It occupies two very distinct spaces and mashes them together into a nightmarish stew you can’t help but enjoy. Ainslie has made a delectable entry into the cannibal woman subgenre of horror that also serves as a magnifying glass on the damage inflicted by toxic relationships. Come for the pettiness, stay for the carnage.

‘Do Not Disturb’ starts a slow-burn romantic drama and erupts into an arterial spray full of psychedelic, cannibalistic sex.

The Buzzard’s First Ever Television Show

Why did Micheal Ward leave Top Boy as Jamie?