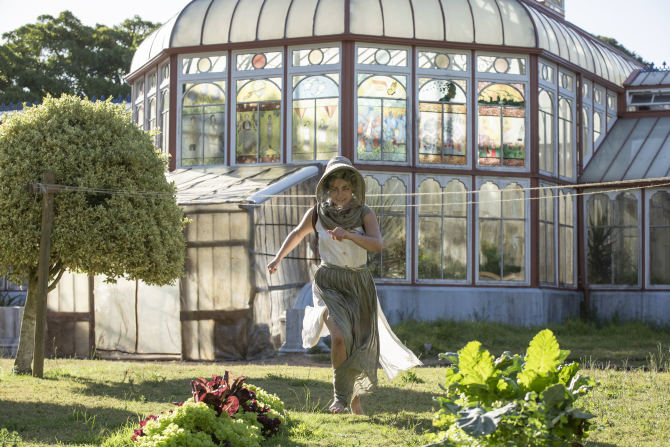 The exterior shots are so pretty. 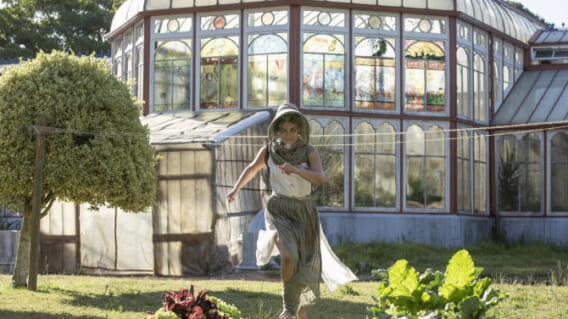 Glasshouse is supposed to be a South African dystopian sci-fi thriller. The film follows a family that has retreated to their glasshouse to avoid the outside world and memory-erasing toxins. The family seems to have adapted to this way of life as they hold onto each other and their secrets for dear life. However, a man appears and disrupts their tranquil way of life. Think Beguiled but set in the future.

On paper, this sounds cool and exciting. This woman and her four kids have built their little commune and have rules to keep them safe. So, an outside threat being invited in and trying to seduce the two older daughters in a bid to stay should be spicy. The possibilities of where this could go are endless. However, this movie settles for giving us a lot of pretty pictures and silent moments. It felt like a CW pilot for a weird period piece.

One particularly strange choice is this family takes The Stranger (Hilton Pelser) in and just kind of lets him wreck their world. Mother (Adrienne Pearce) sends a couple of snarky comments his way but does not even think of doing anything until it is too late. The oldest two daughters, Bee and Evie (Jessica Alexander and Anja Taljaard, respectively) are written as if they are incapable of thoughts. They never question The Stranger’s motives or question how he’s always near the drama in the house. They never compare notes on how he is seducing them both to keep a roof over his head.

Also Read: ‘Orphan: First Kill’: Poster and New Image Arrive To Torment You And Your Family

To add insult to injury the pacing makes Glasshouse feel even longer than it is. The least we could have done was pick it up and trick us into thinking we would get more than vibes. Each scene marches along at a languid pace as if defying any tension that might attempt to sneak in. The film runs 94 minutes but feels longer. Much of the film could be trimmed to make it a decent short or pilot. 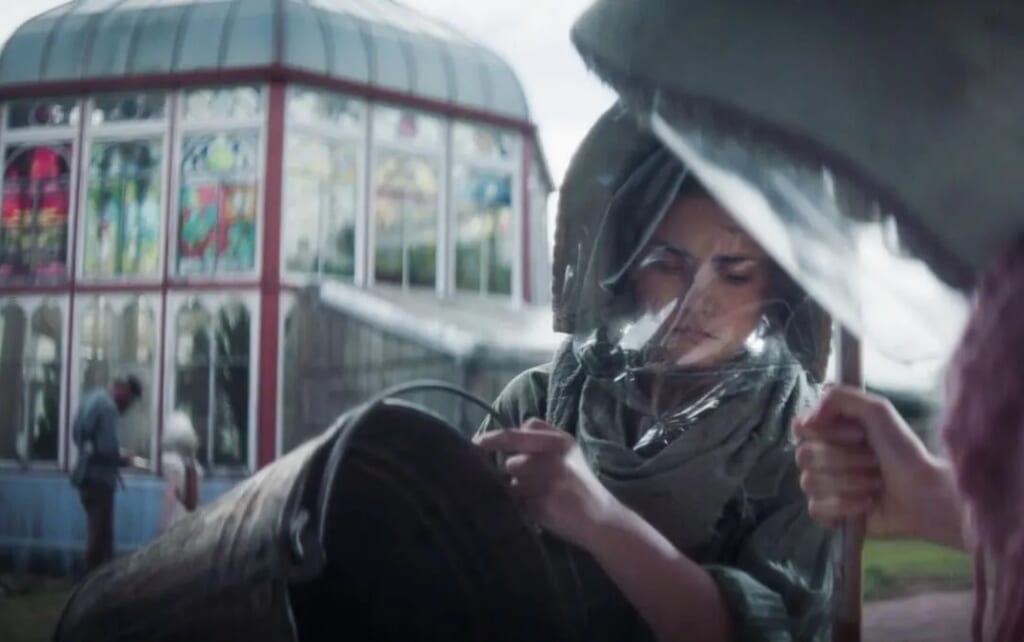 Glasshouse feels like a novel from the 17th century that we all silently agreed to forget as a society. This would also explain why we are getting a South African movie without any Black characters in this decade. It might also explain how it is a thriller when there is never any tension. A dystopian thriller should be lit! Yet here we are with cool pictures that would make lovely screensavers. It’s so pretty but never builds a story worth caring about it.

If you want pretty pictures to play in the background as you dissociate, then this is the movie for you. If you like vibes over substance, then you might also dig it. Personally, I wish we had these toxins that sent this family into hiding. I would gladly inhale them to help me forget the time this movie stole from me.

‘Glasshouse’ is a cool idea weighed down by a lot of baggage that doesn’t say anything or really go anywhere. It’s a house of vibes and not much else.