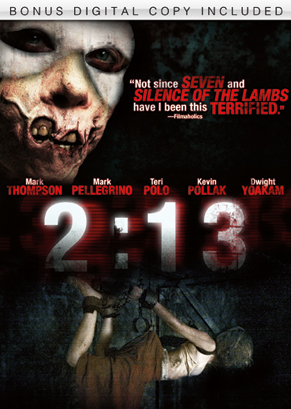 A serial killer who likes to quote Shakespeare’s “Much Ado About Nothing” is stalking the streets and claiming victim after victim. A troubled police profiler haunted by his past is on the killer’s trail, but catching him isn’t such an easy task. As the body count starts to rise will our hero be able to overcome his personal demons so he can figure out who is behind the murders and stop the person from killing people once and for all?

Normally I am just not a fan of these types of movies. I hated “Seven” with a fiery passion and thought that “Silence of the Lambs” was one of the most overrated films I’ve ever seen in my life (yep, I’m sure I’ll take a lot of heat for making those comments). I went into “2:13” not really expecting a whole lot but to my surprise I actually liked it. It wasn’t my new favorite movie or anything, but it was a pretty good film and I enjoyed it.

One of the things that I liked about it was the fact that it was a mystery as to who the serial killer was and it was fun trying to figure it out before the main character did. To be honest it really isn’t that hard to solve the mystery of the person’s identity (I knew as soon as the person appeared on camera) but I had fun trying to deduce it anyway (plus it made me feel smart and improved my self esteem because I guessed correctly). Even if it is fairly easy to figure out who the killer is we are thrown a nice little twist about the person that I didn’t see coming.

Though there isn’t a ton of blood and guts to be found here there was still enough to keep me happy. We get an impaled breast, crushed ribs, a pretty bloody stabbing, someone commits suicide by stabbing himself in the temple with a shard of broken glass, and a variety of amputated body parts. Most gore hounds may be let down that this movie isn’t as blood-soaked as other movies dealing with the same subject matter, but I thought that the small amount of gore that we got was good enough without it being over the top. 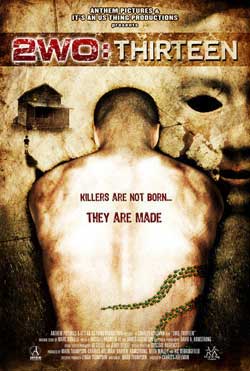 I also really liked the characters a lot as well. I thought that Spivey (Mark Thompson) was a good character and I couldn’t help but feel for him due to everything that he’d been through in his life. He is a depressing, self destructive guy and I just couldn’t help but root for him. Speaking of depressing characters, the killer also had a pretty sad back story as well. He was abused by horribly by his unstable mother when he was a child and not only did he witness her killing his abusive father but he had to hide the evidence as well so she wouldn’t get in trouble for the murder. His mom also liked to tie him up and beat on him as well, so it is no wonder the guy became such a messed up individual who liked to kill people. I also liked Amanda (Teri Polo) as well and thought that she was believable as a love interest for Spivey. I do wish that she had gotten just a little more screen time though.

I have to admit that I loved the ending. It ends on such a downer it isn’t even funny but it works. I think that had it had a happy ending that it totally would have taken away from the rest of the movie since it had such an overall dark, bleak tone. I don’t want to give anything away that happens at the end but let’s just say that if you’re looking for a movie with an upbeat, feel good ending you may want to shy away from “2:13.”

I enjoyed this movie and though it wasn’t the type of flick I am usually into I still liked it. It was entertaining and even though the plot wasn’t the most original it is still worth a look. I think that if most people would give it a shot (and stop calling it a “Seven” rip off) they would like it too. Give it a try if you run across a copy of it, you may just find yourself really into it.

2:13 is now available from Echo Bridge

See Where Your Favorite Project Runway Contestants Are Now