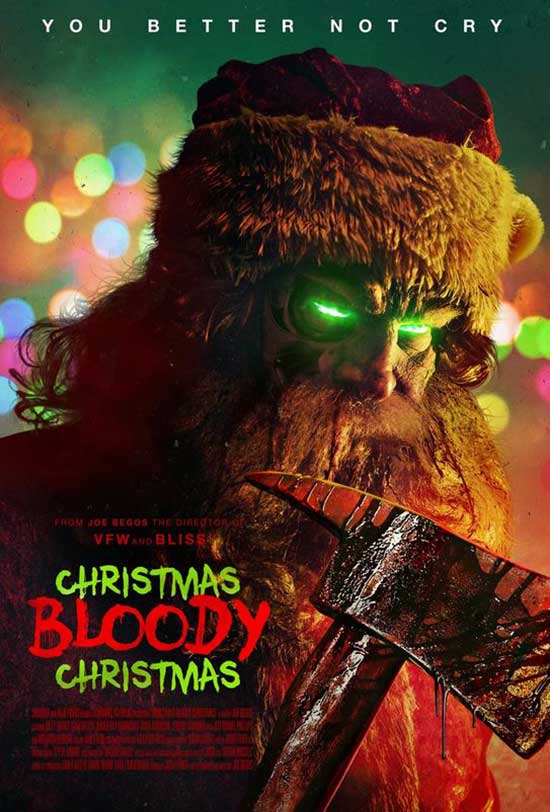 In CHRISTMAS BLOODY CHRISTMAS, it’s Christmas Eve and fiery record store owner Tori Tooms just wants to get drunk and party, until the robotic Santa Claus at a nearby toy store goes haywire and makes her night more than a little complicated. Santa Claus begins a rampant killing spree through the neon drenched snowscape against a backdrop of drugs, sex, metal and violence, ultimately forcing Tori into a blood splattered battle for survival against the ruthless heavy metal Saint Nick himself.

The Halloween post blues has set up for some people but for Horror fans, we celebrate all year. Halloween is every day. Halloween doesn’t quite get to continue the celebration. Over the years once November 1st hits, it’s Christmas time. Store rips down Halloween decorations and the Christmas decorations go up. I wonder about the food that some of still can’t get in certain stores but guarantee it that you can get some kind of small, medium or ginormous Santa to decorate with. You may not be able to get baby formula, tissues, and eggs. 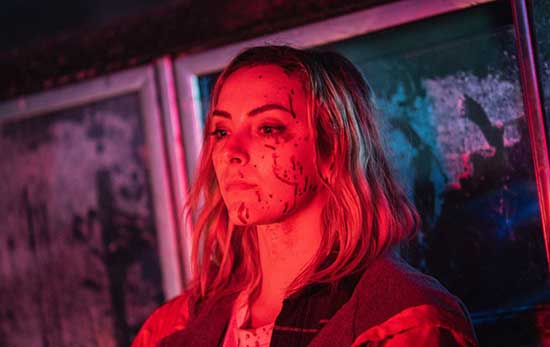 Horror movies have ventured into other holidays and Christmas does follow Halloween. We have some great Horror related Christmas-related films including Black Christmas (1974), Silent Night, Deadly Night, Krampus, A Christmas Horror Movie, Silent Night, Holidays (2016), The Lodge, Secret Santa, The Nightmare Before Christmas, The Munsters’ Scary Little Christmas, Gremlins Anna and the Apocalypse, The Gingerbread Man, Red Snow which is a bad ass Christmas vampire movie. P2 (2007) is one of my all-time favorite movies. If youre interested in a good Black Friday… just before Christmas movie, check out Black Friday starring Devon Sawa and Bruce Campbell. It’s insane in a great way. 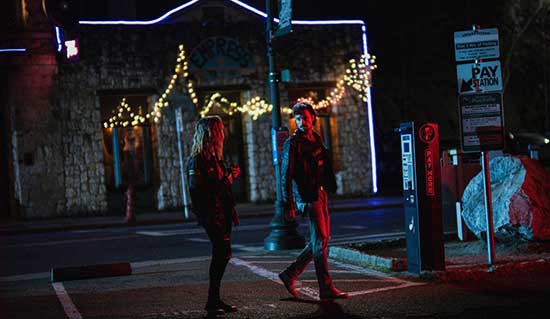 Joe Begos is one of my favorite directors and one hell of a writer. VFW, Bliss, The Mind’s eye, Almost Human, and now he gift’s us with an exceptional, bloody, wild, violent Christmas film.

Christmas Bloody Christmas opens with a commercial of what’s to come with Robo-Santa… Have we learned nothing from RoboCop (1987)??? 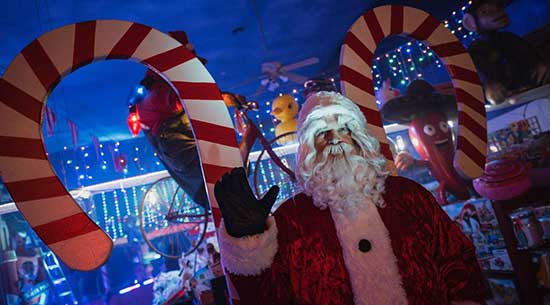 Moving on… We meet Tori Tooms portrayed by Riley Dandy (Kappa Crypto, The City of Gold) and Robbie Reynolds portrayed by Sam Delich, and of course Dora Madison portrays Lahna, Dora appeared in Bliss and VFW. Tori and Robbie end up at a bar with Larry (Josh Ethier) at the bar.

Lahna and her man are partying and having a good time at the toy store, and we get a brief look at the glitching Robo-Santa. What a great cast, Sherriff Monroe shows up at the bar for a drink, and he’s portrayed by Jeff Daniel Phillips. The colors and cinematography’s great, the music conversation is awesome.

Lahna is having a blast when Robo Santa wakes up, and YEAH to Joe Begos for adding Black Christmas (1974) into the Christmas movie, and the movie conversation between Tori and Robbie. Abraham Benrubi portrays Santa. Tori decides to let Robbie come home with her to drink, talk about movies, and party on Christmas Eve while Robo Santa stomps his way to Tori’s house. 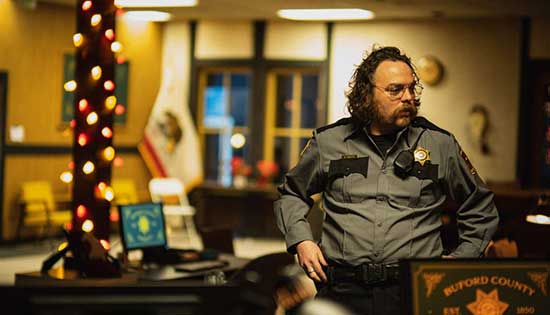 Robo Santa finds the neighbors first, and Tori learns that Robbie does in fact know how eat p*ssy. The special effects are great. Once Santa finds the neighbors, all hell breaks loose. Tori has to get her sister Liddy (Kansas Bowling) and her brother-in-law Mike (Graham Skipper). This movie is as if, Silent Night, Deadly Night had a party and invited Die Hard (1988) and RoboCop… But, Joe Begos said, hold my beer. It’s going to be better than that! I don’t care what anyone says, and its f*cking awesome.

Joe Begos appears as Benny Barnes, he’s the other neighbor. Abraham Benrubi (Parker Lewis Can’t Lose, The Program) is so good as Santa. His movements, how he walks and sort of stomps like a robot. It gives it something extra. Tori is in the midst of chaos as Santa is just killing everyone.

In Silent Night, Deadly Night mayhem, Tori goes apeshit herself and winds up getting some help from the rest of the cops including Sherriff Monroe who believes her but doesn’t entirely believe her or comprehend what she’s talking about. The cops think, oh, she’s partying and just out of her mind. Riley Dandy is one bad ass final girl. Now this Santa is just walking around like T-1000. 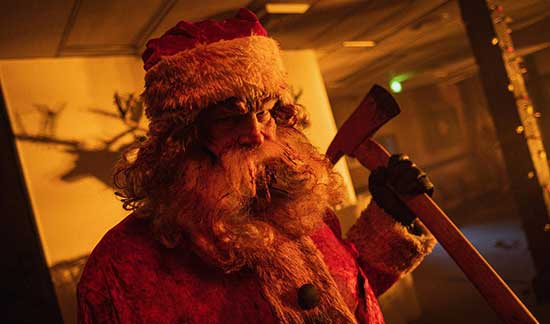 Steve Moore delivers awesome music that maintains the party ends of the film and the wildness of the film. The grittiness gives it a seventies feel. Joe Begos delivered and he did an incredible job with Christmas Bloody Christmas. It’s a reminder that originality is awesome.

Make sure to check out CHRISTMAS BLOODY CHRISTMAS. 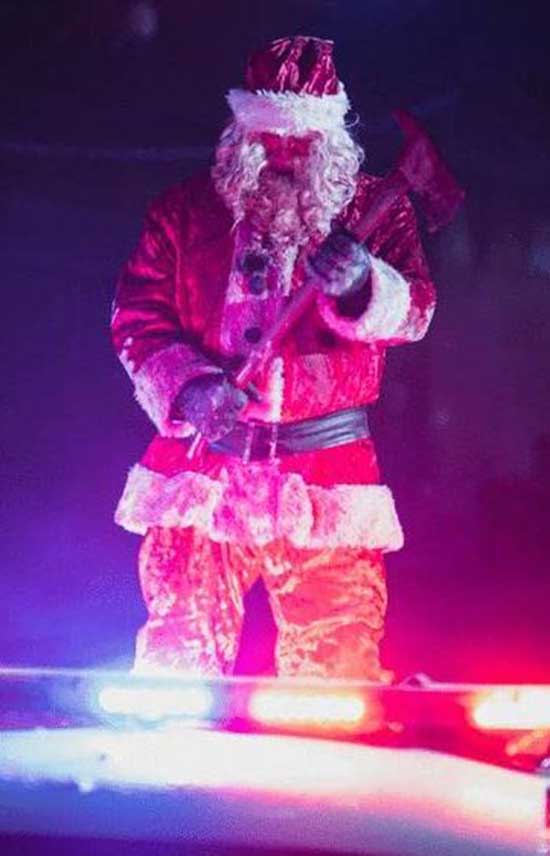 Shudder and RLJE Films will release CHRISTMAS BLOODY CHRISTMAS in Theaters and it will stream exclusively on Shudder on December 9, 2022.