Get an exclusive look behind the making of the film. 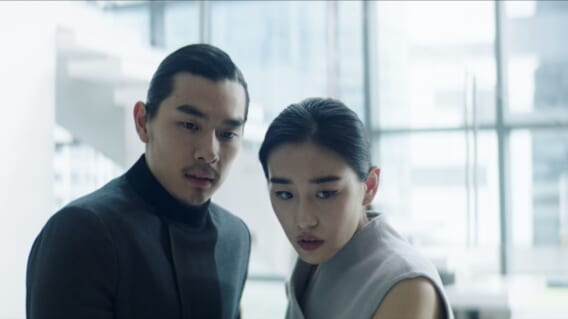 Sci-fi and romance are a surprisingly beautiful combination. Think of films like Spring or The Wanting Mare. Those films that use science fiction elements to create new worlds for love to flourish. Writer and director Neysan Sobhani taps into this trend with his feature film debut Guidance.

In the not-too-distant future, humanity slowly rebuilds itself a decade after The Great War. Believing that the ability to lie is the root cause of the devastating conflict, a tech entrepreneur creates a pill containing a nanotechnology app known as “Guidance” that allegedly will make everyone more enlightened. Once swallowed, an A.I. “installs” in the person’s nervous system and aids their ability to detect deception in other people among other enhancements.

A young couple goes on a weekend retreat to the countryside, and they begin to use Guidance. However, recent events have potentially compromised their trust in one another. With the tech in their bodies, the couple tries to subvert Guidance in the hopes of saving their relationship before it’s too late.

Check out this exclusive look at the making-of documentary for Guidance:

As a diaspora filmmaker, Sobhani’s films have flavors of Asian and Western cinema, with his short films appearing in over 40 international film festivals around the world. Reframing audience perceptions of Chinese films through a blended genre approach, Gudiance was released in cinemas across China in late 2021.

Guidance comes to VOD on June 17.