GWAR and Insane Clown Posse Made Two of the Best

The presence that GWAR and Insane Clown Posse command within the horror scene is undeniable. You don’t have to see This Is GWAR or The United States of Insanity, the two new documentaries centered around both bands, to know this. But the movies—each of which had their world premieres at Fantastic Fest this year—certainly serve as a testament to their influence.

This Is GWAR explores the artistry and heart behind the legendary metal band’s shock rock antics.

GWAR’s brand of interactive cosmic horror and over-the-top practical stage effects have been blowing the minds of metal fans and monster kids for nearly four decades. For anyone that’s ever been front-and-center at a GWAR show, the barrage of blood and guts sent hurling towards the crowd will either make you duck and run for cover or jump up and cheer for more. There’s a sick and twisted camaraderie between fans—especially after the concert, when you throw a knowing wink at someone walking by whose skin is also dyed a pinkish red from all the fake bloodshed.

In The United States of Insanity, we see how that outsider mentality and sense of community may be even stronger among hardcore fans of Insane Clown Posse.

Famously known as the Juggalos, they, too, walk away from Insane Clown Posse concerts drenched to the bone—but that’s from being sprayed by gallons of Faygo, the local soft drink of choice in the band’s native Detroit. Harmless as that may sound—and it is—in recent years, the FBI has flagged Juggalos as an actual gang, on par with crime syndicates like MS-13. Amidst Insane Clown Posse’s ongoing struggle to remove the Juggalos from the U.S. threat list, their fans’ shared bond has only grown stronger.

Once GWAR and Insane Clown Posse’s respective fanbases have seen these films, they might be surprised by how much the Scumdogs of the Universe and the supposed scumbags of America have in common.

The United States of Insanity Has a Message

The United States of Insanity reveals the human faces behind the clown makeup, and how the band’s political cause represents a larger fight to defend the rights of the poor and the working class. Directors Brenna Sanchez and Tom Putnam may not have been self-proclaimed Juggalos when they started out making the definitive doc, but they did have a strong connection with the band’s Detroit roots.

Their 2012 documentary, Burn, chronicled the lives of Detroit firefighters, took 14 months to shoot, and according to Putnam, had “north of a thousand hours of footage—a huge amount for an 86-minute movie.” For The United States of Insanity, they went even further: The doc was filmed for seven years, since 2014, before they settled on its final cut. 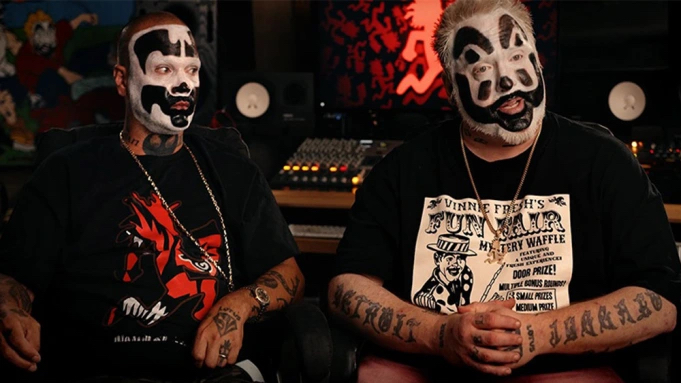 Violent J and Shaggy of Insane Clown Posse in The United States of Insanity. Image courtesy of Strike Back Media

“The first thing we filmed was their press conference with the ACLU, and things just snowballed—avalanched?—from there,” Putnam tells Dread Central. “One of the big challenges with editing this was how crazy we should or shouldn’t make it. If you’ve seen the movie, you know how nuts it is. We get in a fight with the ATF, there are protests, people lose their jobs or lose custody of their kids… scene after scene of mayhem.”

Putnam says that obtaining this level of access was simply a matter of trust. Once Violent J and Shaggy of ICP saw that he and Sanchez would bring a serious approach to their in-depth doc, they were all in.

“Brenna read an interview with Violent J and Shaggy about what it was like to be doing their thing after more than two decades,” he recalls. Soon after, Sanchez called the band up to gauge their interest in a doc. And when she did, they excitedly asked if the filmmakers could have a camera crew in Detroit the very next day: “They were going to hold a press conference with the ACLU to announce they were suing the FBI.” 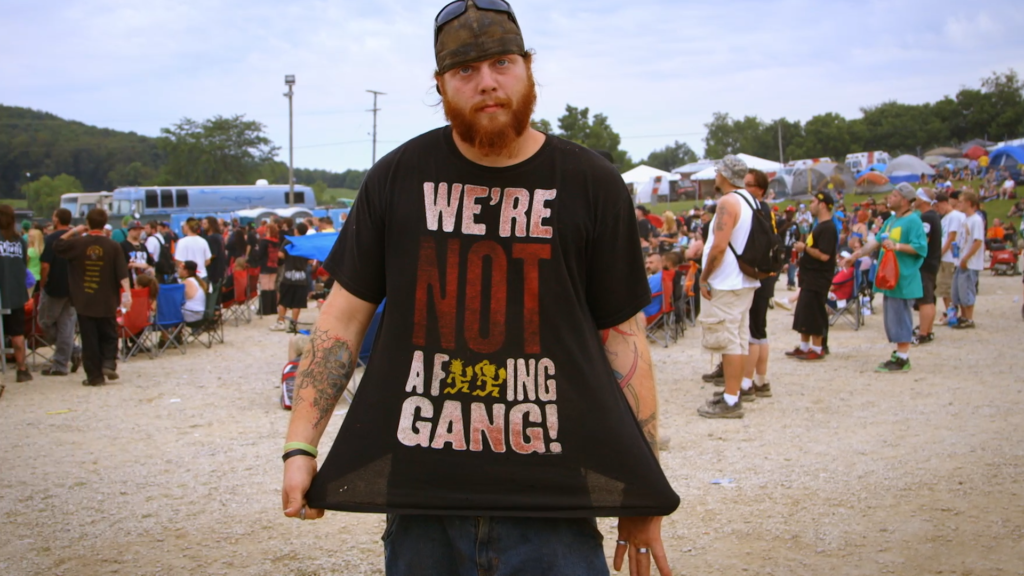 The United States of Insanity. Courtesy of Strike Back Films

The ending of The United States of Insanity shows the Juggalos marching on Washington—a moment of which the band is especially proud. Although it took some time—he’s currently dealing with congenital heart failure—Violent J shared some thoughts with Dread Central about how the film depicts the band’s unlikely turn to activism.

Shaggy and J are also proud of what The United States of Insanity says about the spirit of their supporters. “It shows that Juggalos can come out of the underground and assemble for war when we need to,” they both told us in a shared statement.

Although their deep respect for their fanbase may never be matched, anyone who watches The United States of Insanity is likely to have a greater appreciation for the Juggalo ethos.

This Is GWAR Has Heart

Director Scott Barber says he and his crew didn’t go into This Is GWAR thinking of it as a rock doc.

“GWAR is something more than just a band,” Barber explains. “They’re an art collective, and there truly is nothing else like GWAR on the planet… or universe.” He was uniquely qualified to bring the group’s stage antics to the screen, he says, because “GWAR is rock ‘n’ roll, comics, sci-fi, and horror all smashed together—basically everything I love rolled up into one package.”

At this time, GWAR’s lead howler, Michael Bishop (aka Berserker Blóthar), is busy preparing for GWAR-O-WEEN in NYC at Irving Plaza. But he took some time away from planning that ultimate Halloween concert to tell us his thoughts on Barber’s feature. 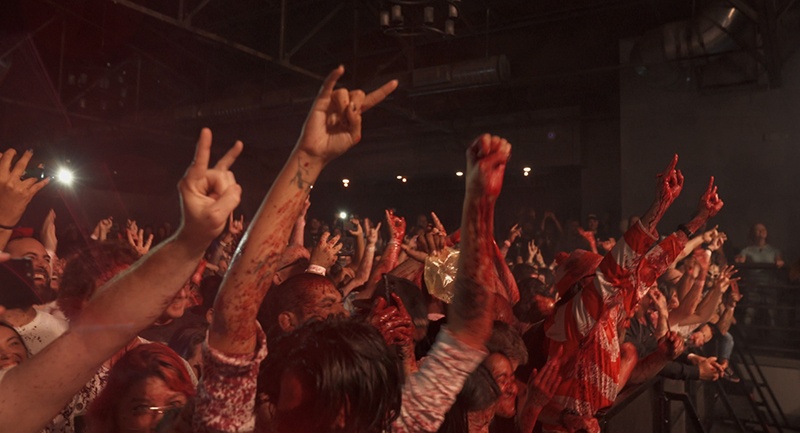 GWAR fans attend one of the band’s interactive shows in a scene from This Is GWAR. Courtesy of Fantastic Fest

“This Is GWAR made me think, ‘What if I’m just an idea, a character in a stage show from the imaginations and struggles of a collective of artists and musicians from Richmond, Virginia, and not, in fact, a bloodthirsty barbarian from outer space?,’” Blóthar says.

“I gotta stop smoking so much weed,” he quips, after posing that existential question. But underneath his toke joke, there’s an earnest appreciation for how the doc tells GWAR’s story.

“This film captures the reality of the people who have worked to make this band,” Blóthar continues. “That has always been the most interesting aspect of it. It’s a story that needs to be told. I hope people come away understanding how unique and special this long experiment in art and music has been.”

When This Is GWAR world premiered at Fantastic Fest, audiences probably expected to be blown out of the theater before it even started. But these are not normal times.

Alamo Drafthouse owner Tim League and producer Josh Goldbloom wanted to blast the crowd with all sorts of substances, but alas, COVID got in the way. “We had some gnarly, spew-licious antics that Tim was wild enough to plan with us,” Goldbloom explains. “He basically said, ‘There’s not a lot I’ll say no to,’ and he wasn’t kidding. Ultimately, safety first, but rest assured it’s just a rain check. GWAR will one day destroy the Alamo.” 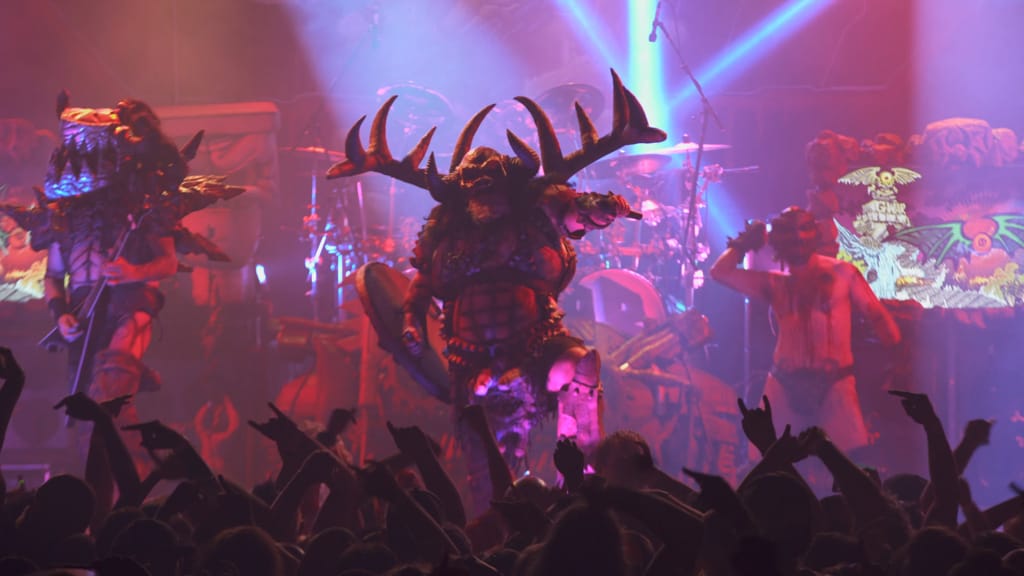 A scene from This Is GWAR. Courtesy of Fantastic Fest

Following its Fantastic Fest debut, This Is GWAR continued its tour of the circuit with a screening at Nightstream. The film will make another stop at Sound Unseen Festival in November, and Barber says the plan after that is to release it theatrically early next year.

If you’re a GWAR fan but don’t consider yourself an ICP fan, bear in mind that the late, great GWAR frontman Oderus Urungus has already bridged the gap between the two bands for you. GWAR and ICP have been playing together since the late ’90s, and the baddest band from outer space has played The Gathering of the Juggalos four times since 2008. Both bands rain down total debauchery and devastation, and it’s high time that their fanbases embraced one another.

Horror-loving crowds, too, are finding an unexpected kinship with the ICP’s devotees. “After the premiere, it was kind of amazing to have so many people come up afterward and say, ‘I think I might be a Juggalo!,’” says Putnam. “People are really surprised by how much they have in common with the Juggalos and how most of the things ICP loves we horror fans love, too.”

The United States of Insanityopens in theaters October 26, 2021. For tickets, go to Fathom Events.

This is GWAR is expected to open in theaters in 2022.