Hold On Tight as Earth’s Mightiest Heroes Embark On Their 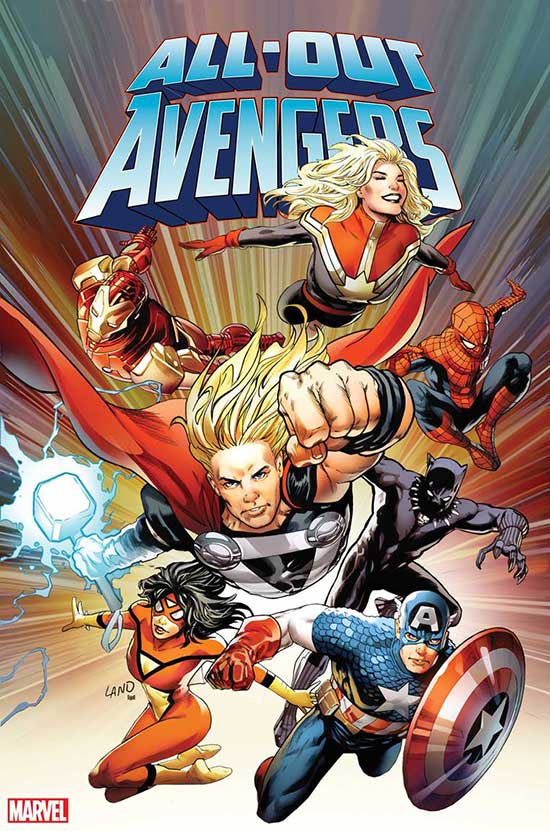 Shown this past weekend to attendees of the Marvel Comics: Judgment Day Panel at San Diego Comic Con, the official trailer for ALL-OUT AVENGERS is here, and fans can get their first glimpse at the incredible action that awaits in the new ongoing Avengers title. Launching on September 7, ALL-OUT AVENGERS will be a thrill ride like no other comic in Marvel history where award winning novelist Derek Landy, and superstar artist Greg Land will throw readers directly into the middle of some of the Avengers’ most pulse-pounding adventures to date. From page one, panel one, the Avengers will be knee deep in the action with no setup, no explanations, and no time for questions! Beware of whiplash as you discover more with the flip of each explosive page! The new trailer showcases just how wild the series will be with scenes showcasing a vicious throw down between Thor and a corrupted Captain Marvel, an army of warriors led by new villainess Queen Arrok, and more! Each issue will see a wide of Avengers tackle a standalone threat but will connect for a breathtaking saga that will keep fans on the edge of their seat in the months ahead!

“The trick was to work within the confines inherent in the concept, but also to find a way to deliver what everyone would expect: a continuity of ideas and the development of an overarching storyline,” Landy said about the book’s unique premise. “I needed to find the hook that drags the reader from issue to issue, and I figured the best way to do that was to put the Avengers in the exact same situation as the reader: they are aware that this is happening, but they don’t know why…”

“After reading Derek’s script for #1, I knew it was going to be a fun and challenging project,” Land added. “All of the scripts so far have been full of interesting and cool scenes for our changing roster of Avengers. Hitting each issue in the middle of the action is a terrific story vehicle and gets us off running from the start. I hope everyone can see the excitement in the artwork and all-out action( pun intended).”

Check out the trailer now and dive into the action when ALL-OUT AVENGERS arrives on September 9!

Retailers, don’t forget to order your copies of ALL-OUT AVENGERS #1 by Monday, August 8!

Is It Cake? | Official Trailer