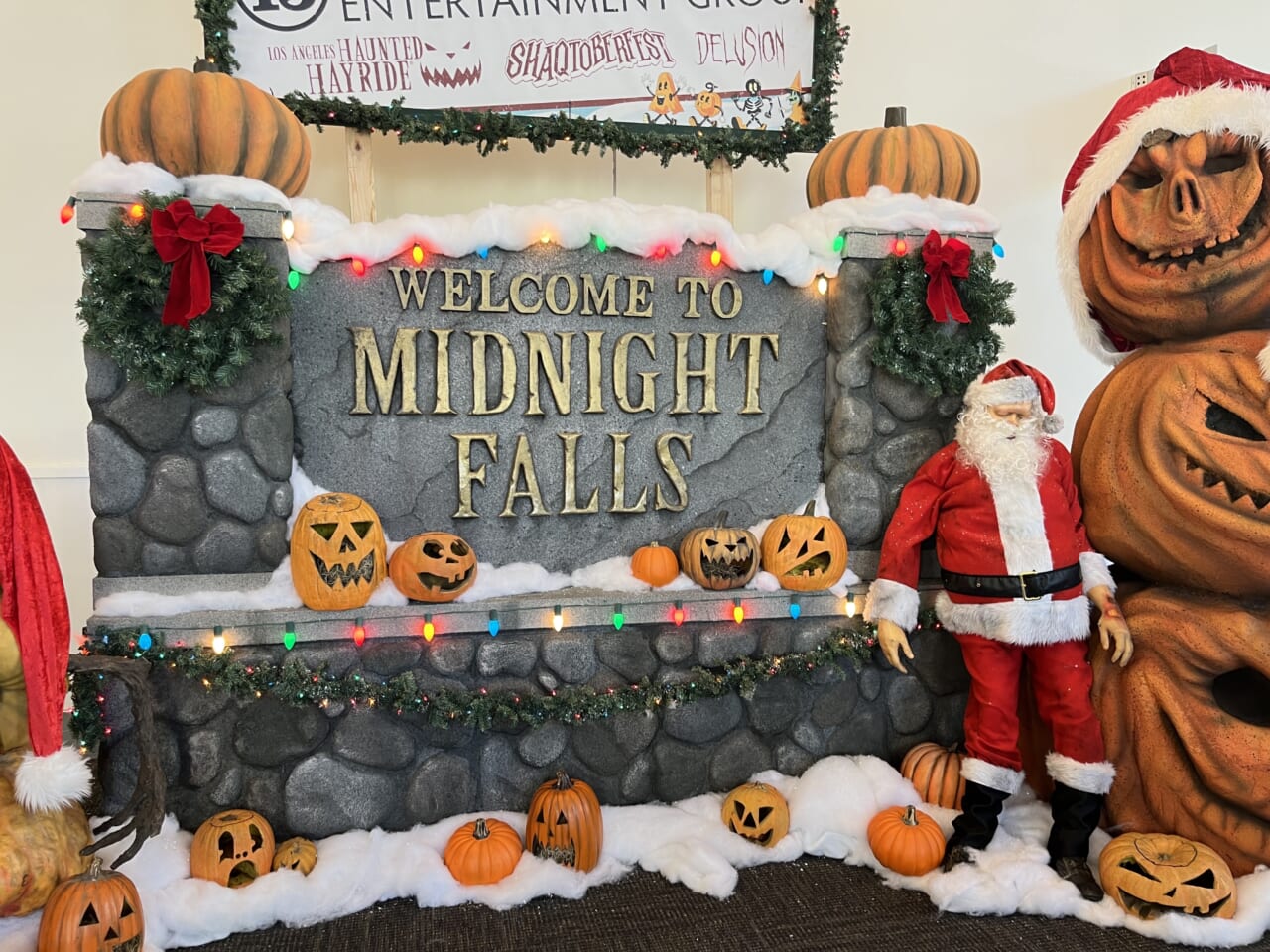 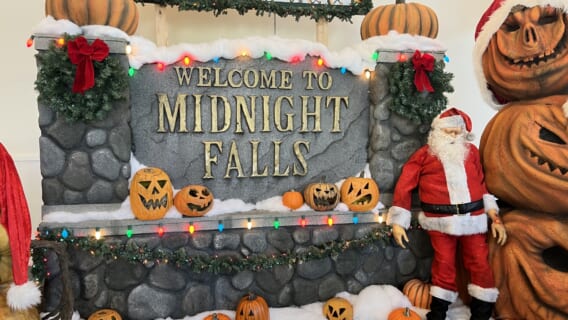 You’ve heard of Christmas in July, but how about Midsummer Scream in the (un)dead of Winter? The minds behind Midsummer Scream took over the Pasadena Convention Center for a weekend of thrills, chills, and Christmas Eve-il! Outside on the Pasadena streets, the holiday season looked pretty much the same as it always does in Southern California: sunshine and blue skies. But just inside was Season’s Screamings, a whirlwind of holiday-themed vendors, cheerfully creepy decorations, and Satan’s helpers.

The sound of jingle bells didn’t signal a white-bearded Saint Nicholas coming to deliver presents, but rather an impending parade of Krampus stomping through the halls with ghoulish grins and bundles of sticks. Inside the hall of vendors, evil elves and slasher icons dressed up in seasonal garb waited to pose for pictures with those brave enough to stand next to them. 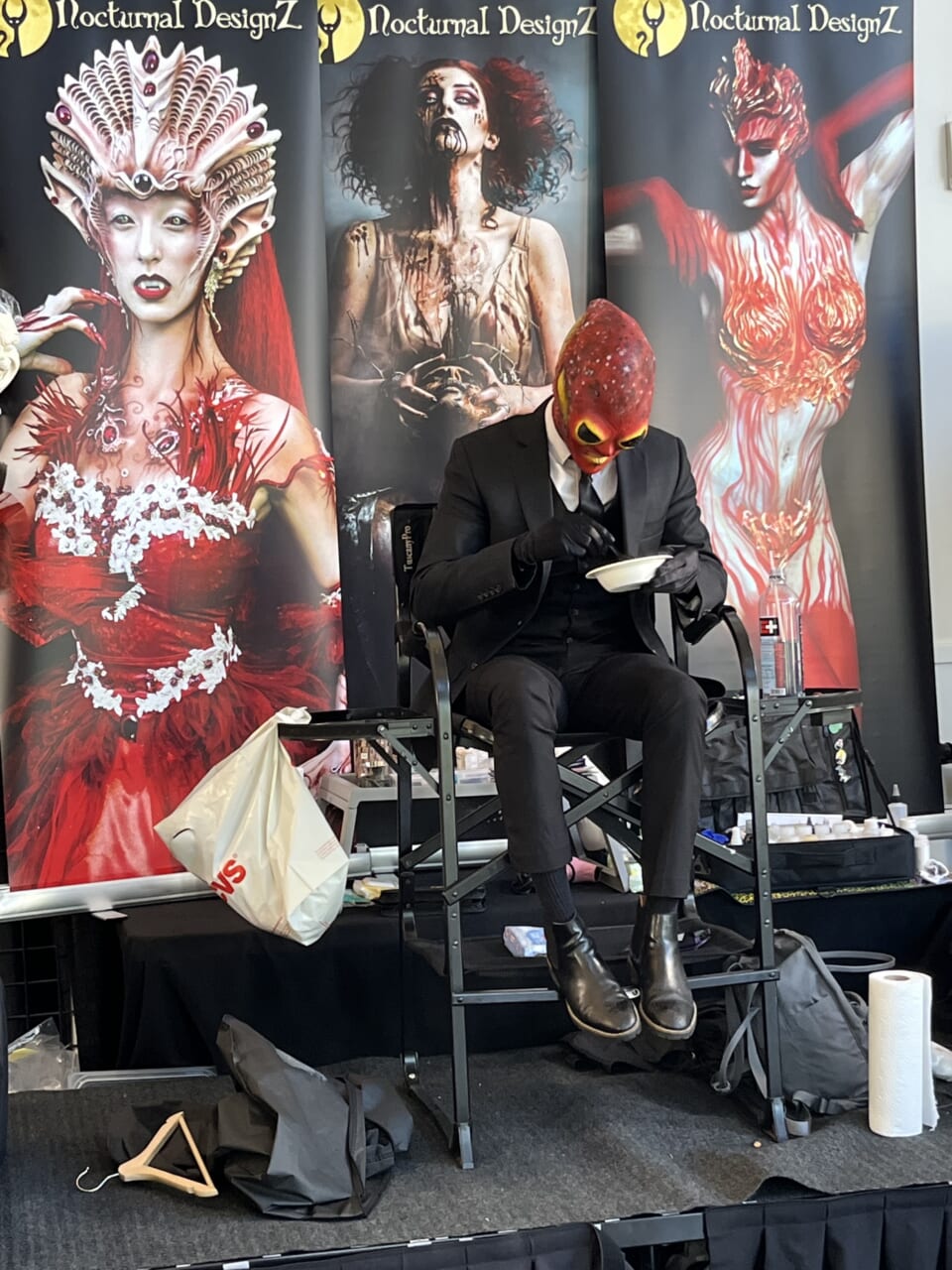 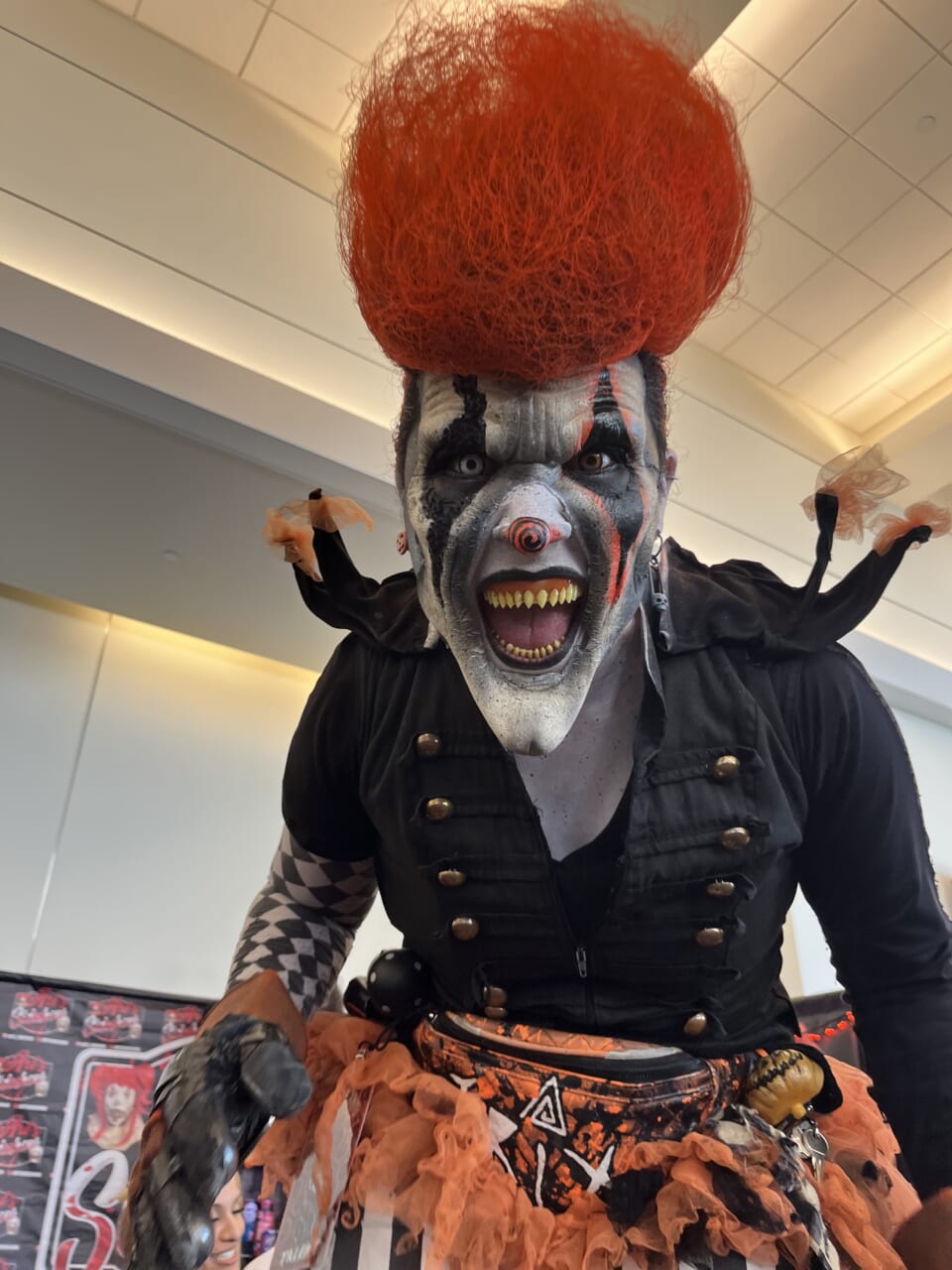 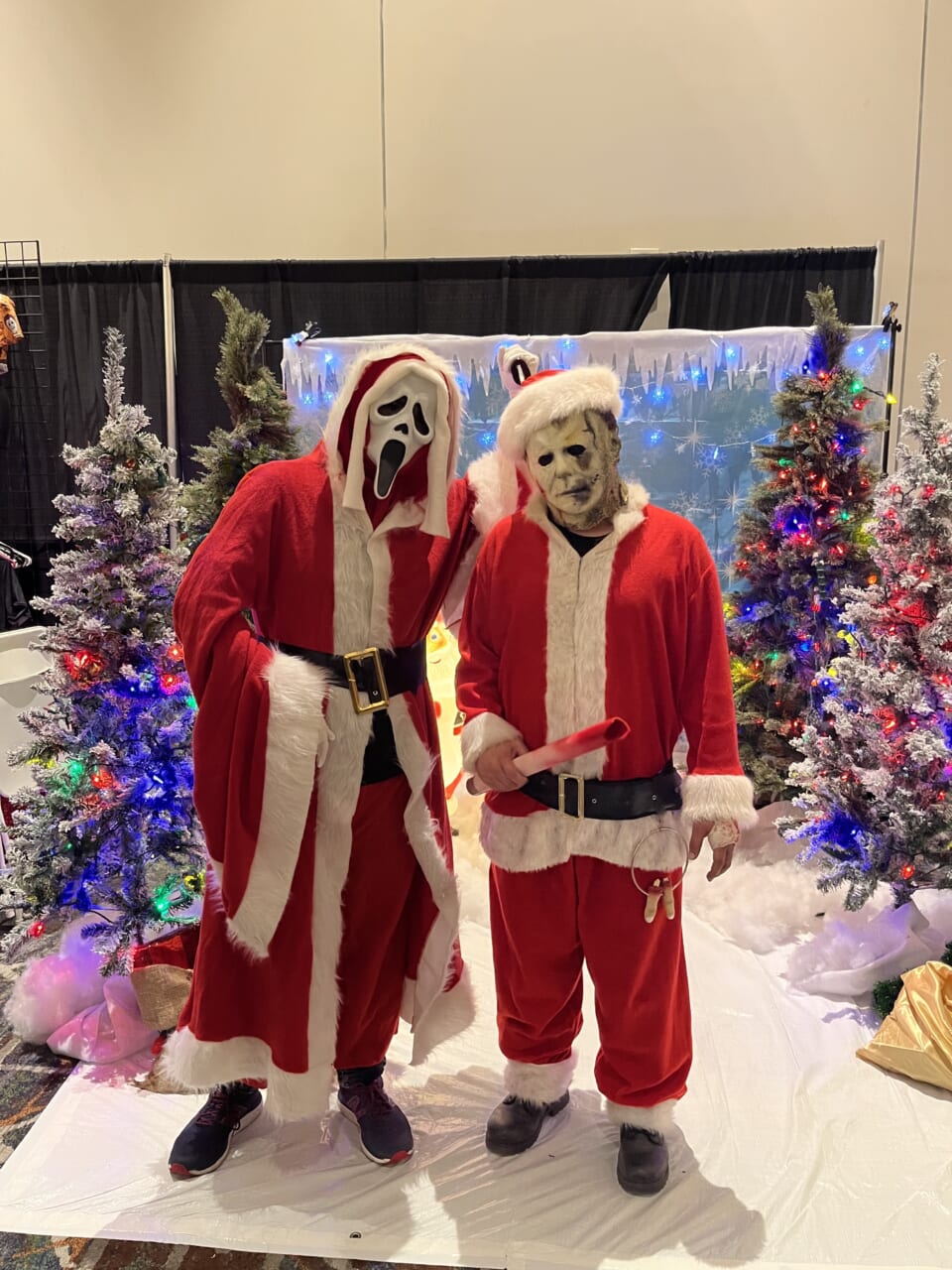 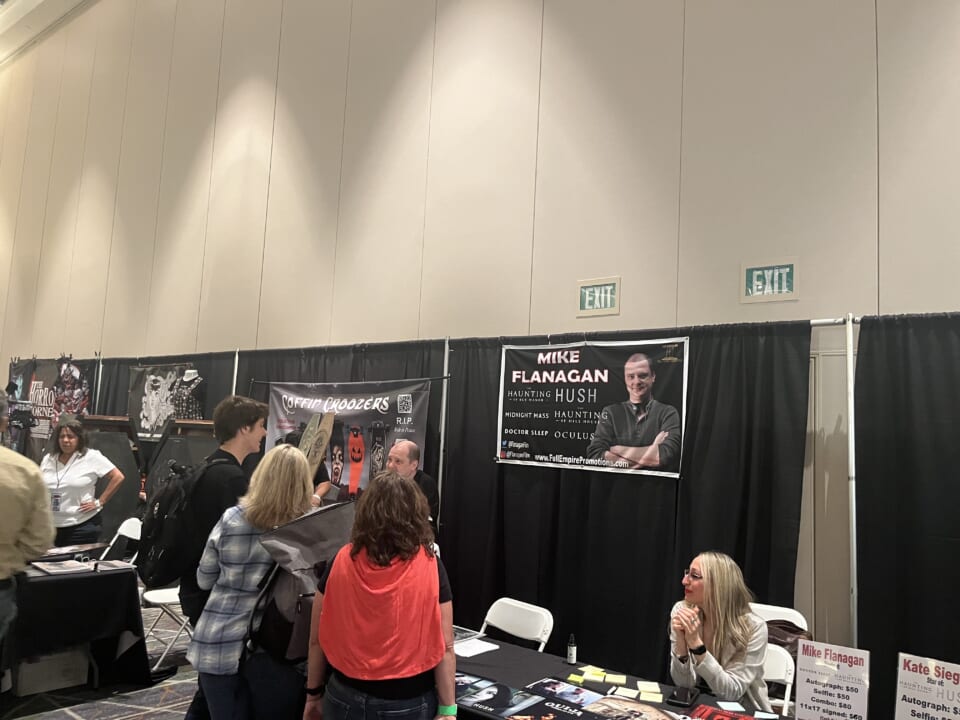 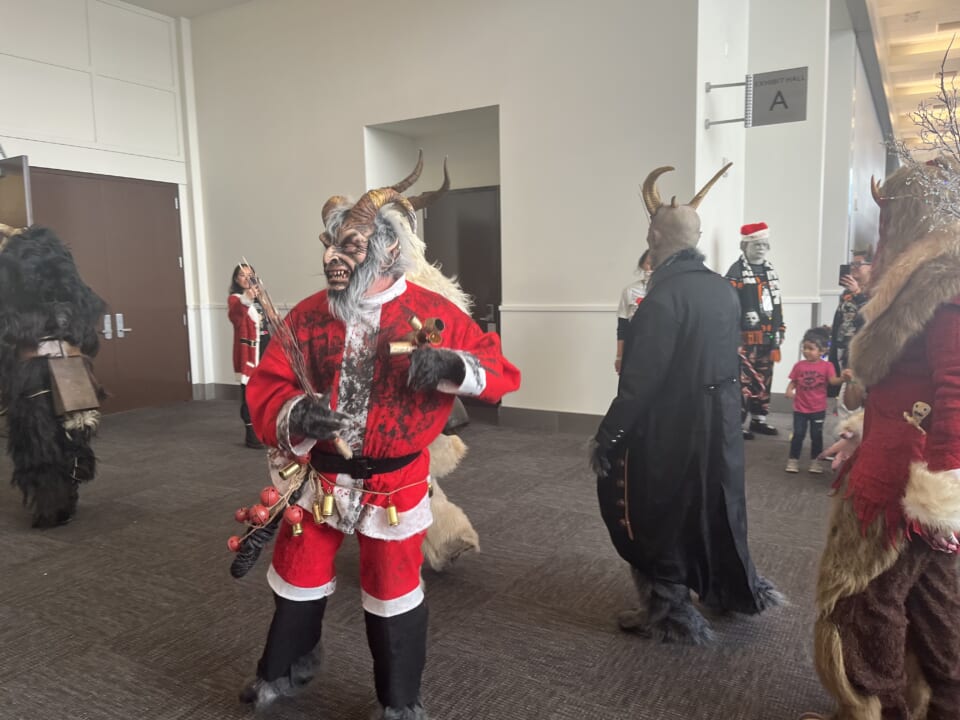 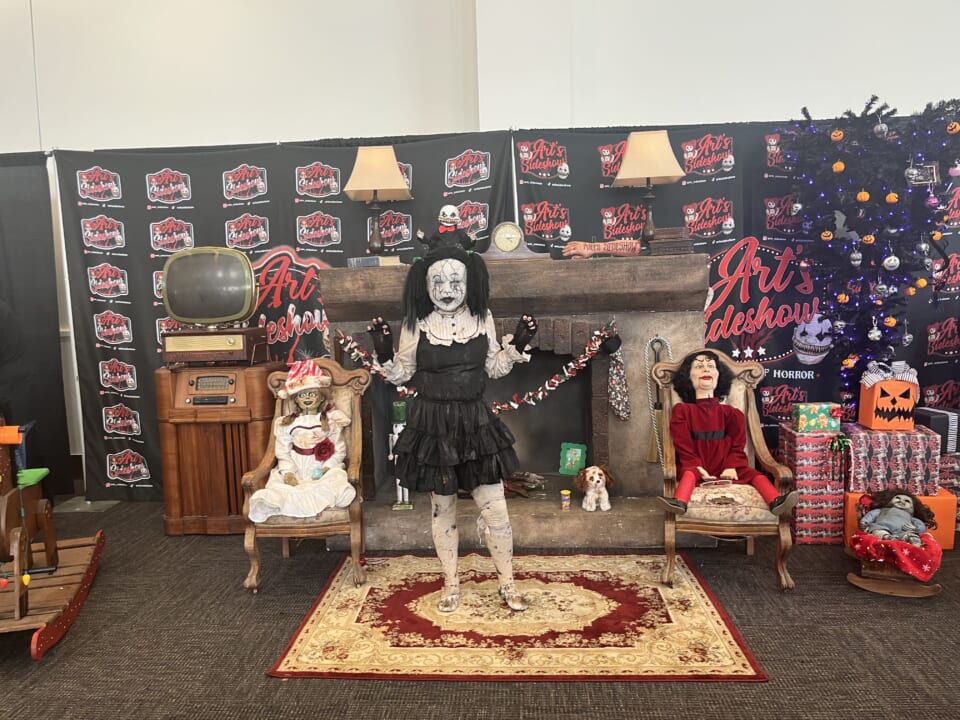 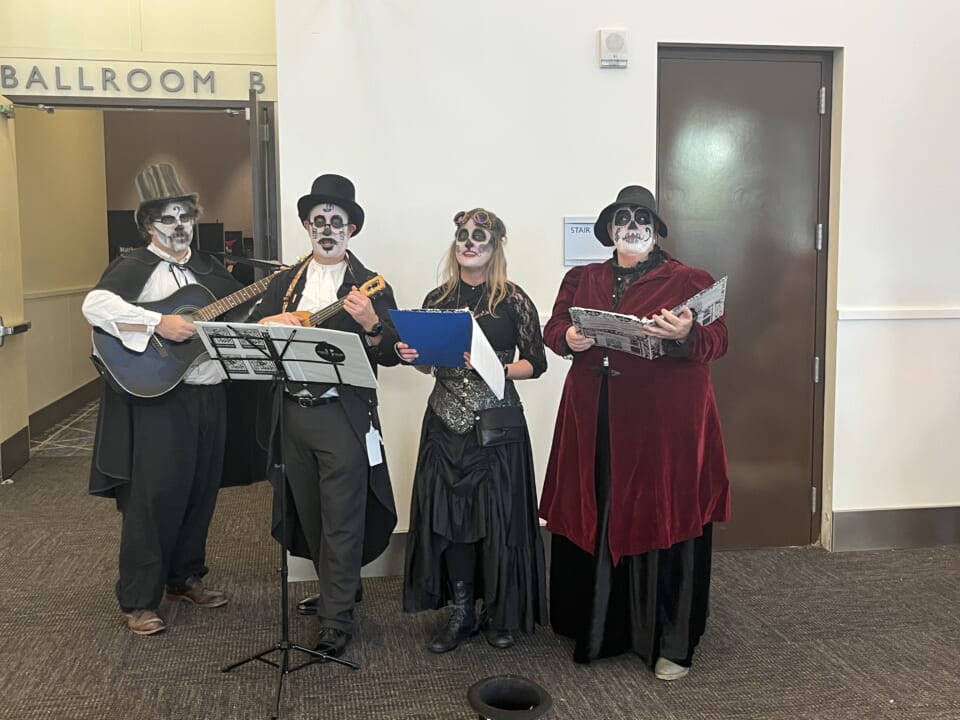 In between the various panels and screenings, and trying to get in some holiday shopping, attendees had the chance to wander through the Hall of Yuletide Spirits, a cursed Christmas village packed with roaming scare actors, and several haunted mazes to try. From a trippy neon funhouse to a snowy Japanese mountainside, there was a little something for anyone who likes to celebrate the horror-days with some good old-fashioned jump scares.

Over on the South Pole Mainstage, there were a variety of performances and panels to check out throughout the weekend. Friday night, attendees looking to earn their spot on the naughty list had the chance to watch Island of Misfit Tease, a horror burlesque performance courtesy of Peepshow Menagerie and hosted by Anastasia Von Teaserhausen as a truly glamorous Krampus.

On Saturday, Fangoria’s The Kingcast hosted a discussion of Stephen King’s The Shining, its legacy, and its various onscreen adaptations, with appearances from two directors who have handled the material firsthand: Mike Flanagan and Mick Garris. Mike Flanagan returned to the stage Sunday, along with several of his recurring cast members, for a Flanaverse Reunion hosted by Bloody Disgusting’s The Boo Crew.

Other stocking stuffers included panels on the legacy of The Grinch, the History of Haunt Sliders, a Holiday Horror Film Showcast, and a special top-secret surprise screening of Grinch slasher film The Mean One, hosted by James A. Janisse and Chelsea Rebecca of Dead Meat.

One unexpected treat, and a real standout of the weekend, was the Nightmare Before Dragmas on Saturday evening. Hosted by Barry Under Your Bed and featuring performances from April Showers, LUXE the Drag Queen, Disasterina and Ave, DRAGPOOL, Miss Clair Voyance, MR. HE, the show served not just to provide terrifyingly terrific holiday-themed drag performances, but also to raise funds for the Colorado Healing Fund in the wake of the Club Q tragedy in Colorado Springs on November 20th. 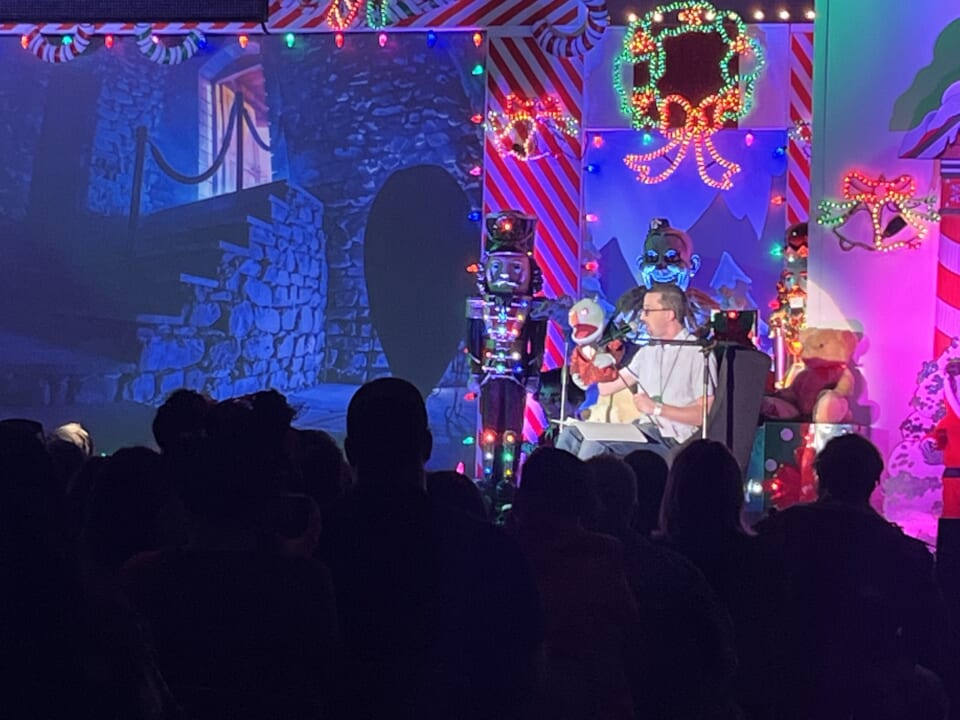 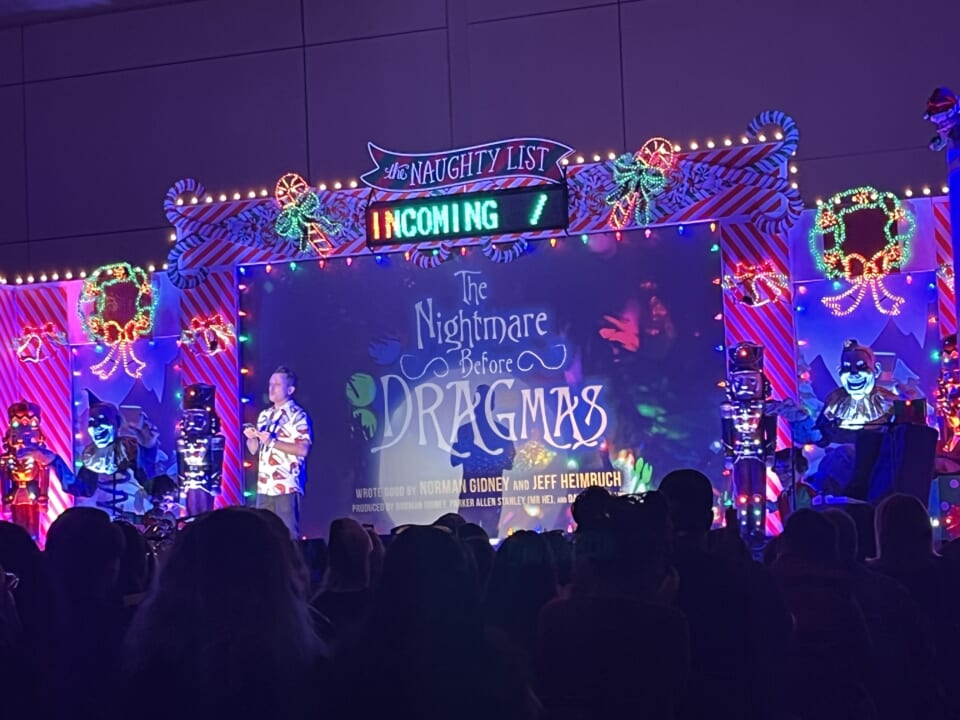 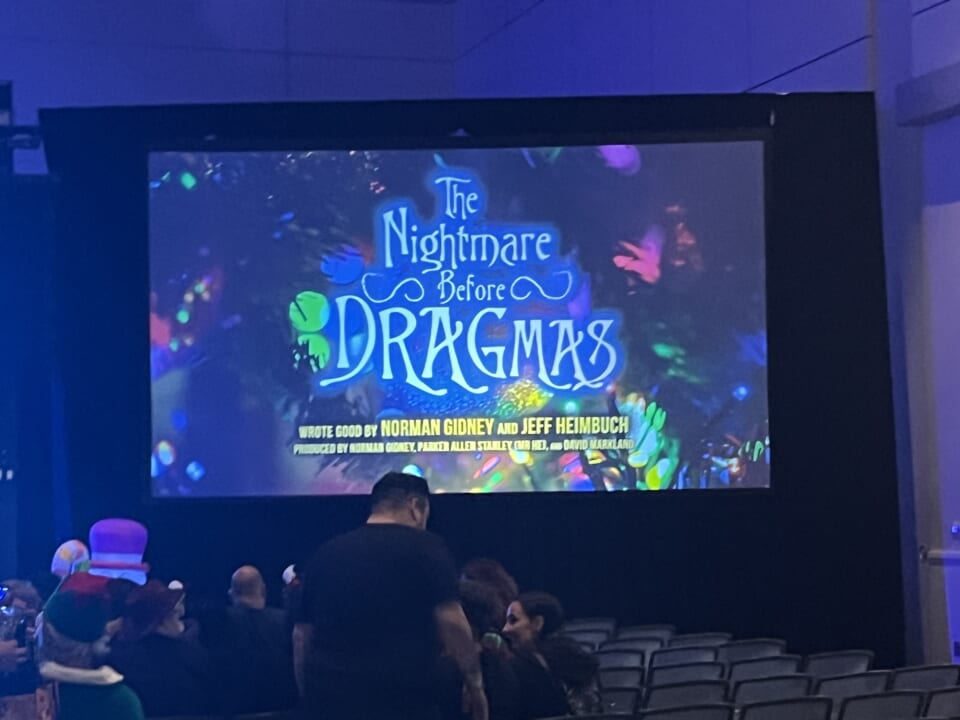 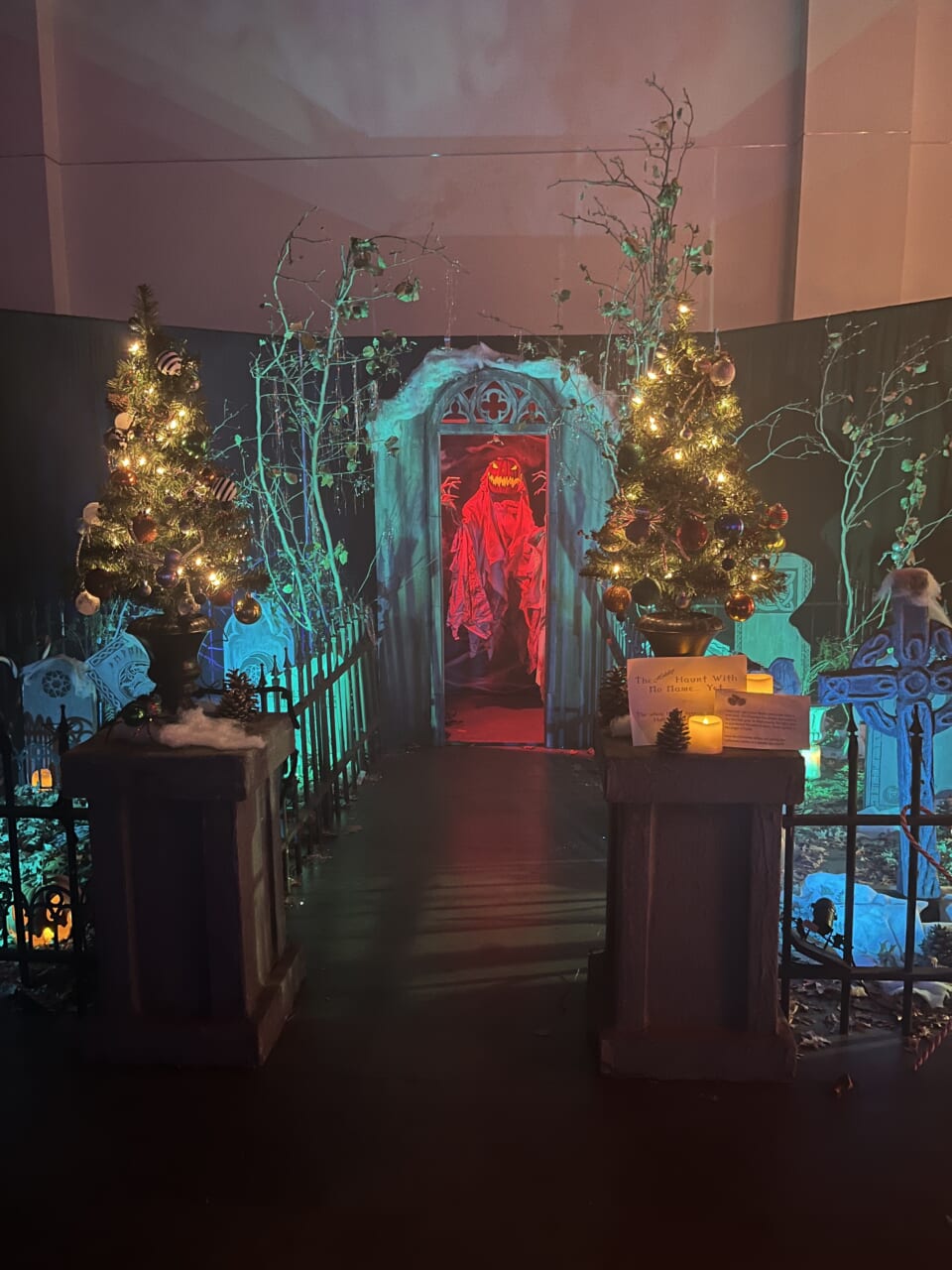 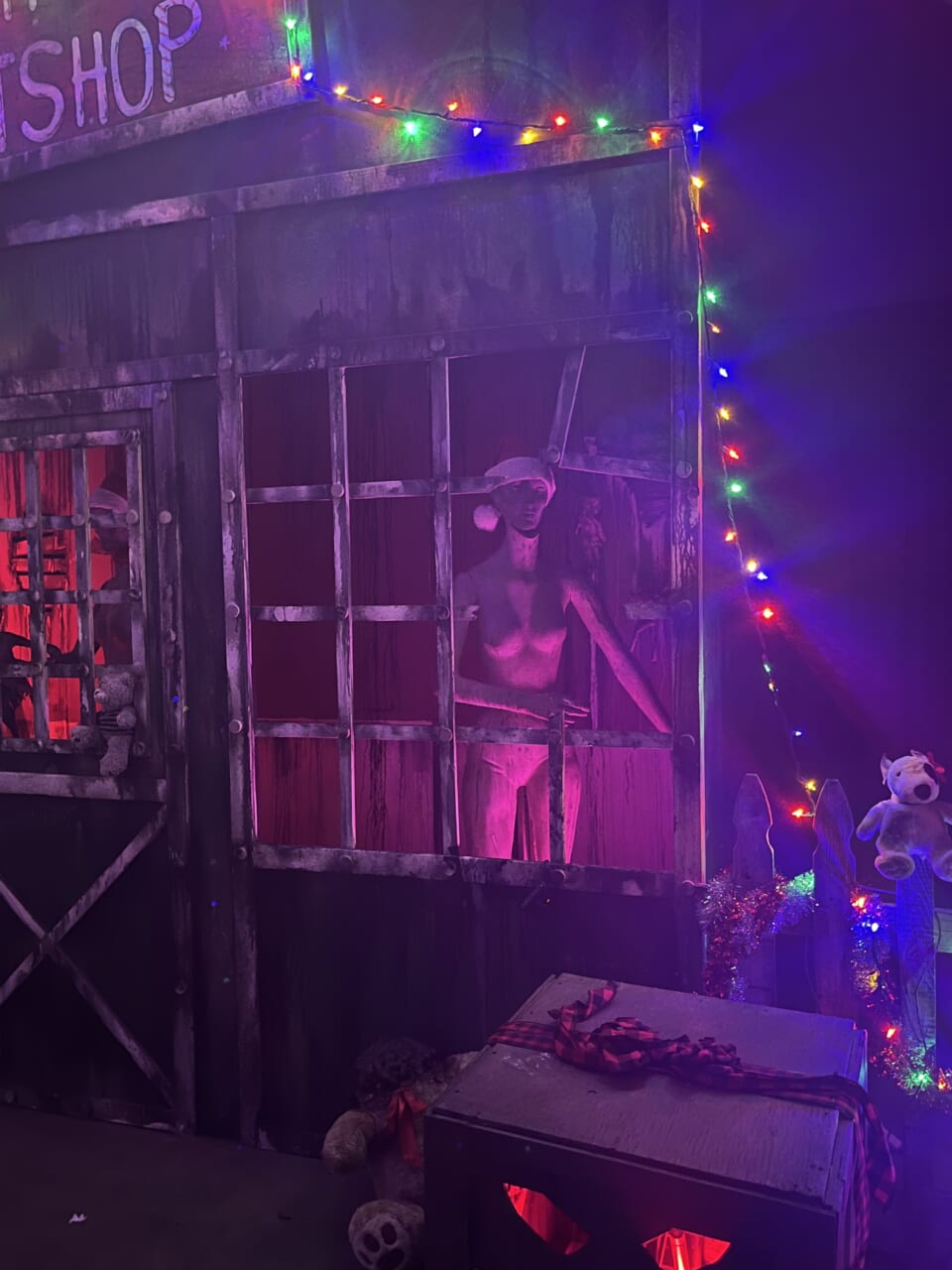 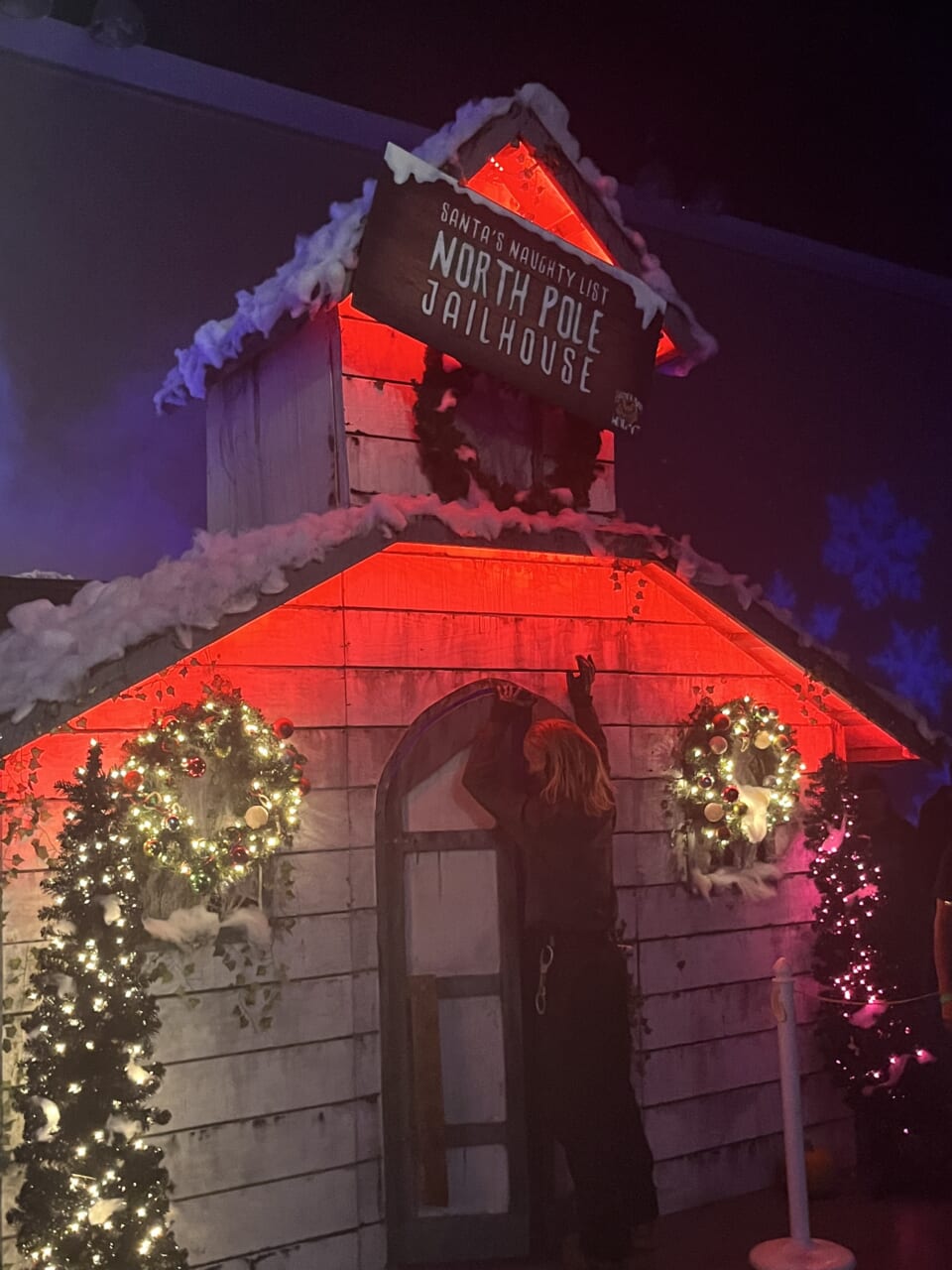 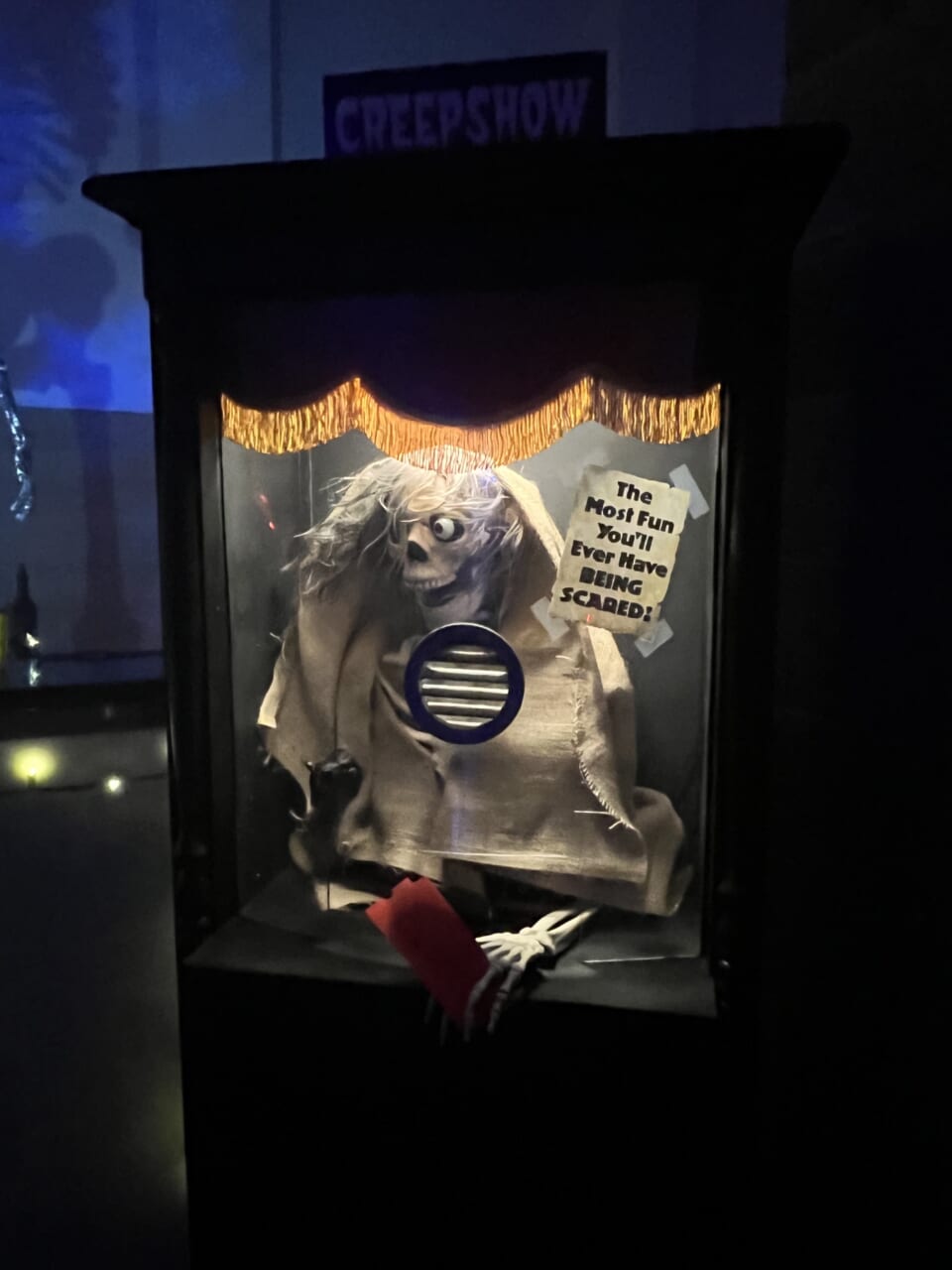 In the weeks following the tragic events in Colorado Springs, the performers, writers, and hosts donated their time and talents to create a holiday horror drag extravaganza that brought some necessary light and queer joy to one of the darkest times of the year.

Sitting there in the crowd, surrounded by cheers, laughter, and fistfuls of cash as the performers strutted their stuff as Elvira, Captain Spaulding, and a little German girl fleeing from the Krampus, was a reminder of everything that the horror community can be at its very best: a place for connection, community, and love, no matter how much fake blood and guts is covering its beating heart.

All in all, Season’s Screamings was a celebration of the fun and flexibility of the horror genre, and proof that horror can’t just be confined to the month of October. There’s room to celebrate it all year round. Scary Christmas to all, and to all a good Fright.