Now In Theaters and On-Demand 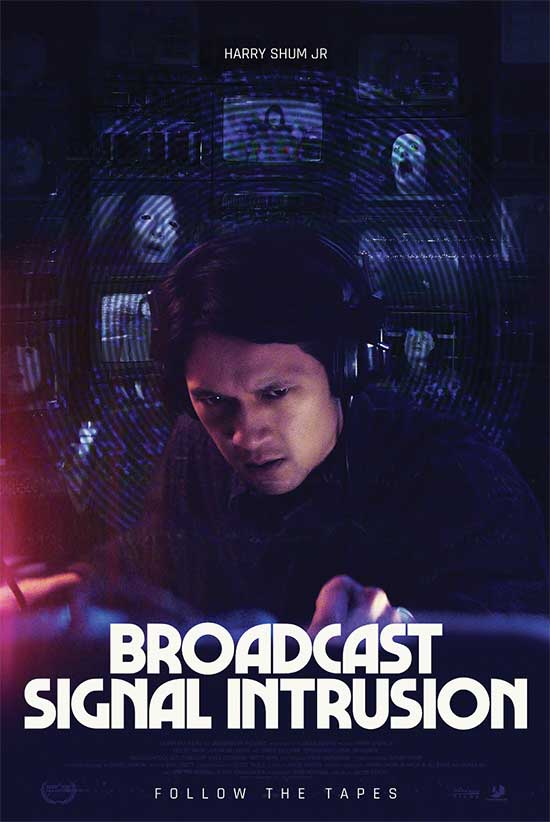 Set in the late 1990s, this psychological thriller follows a video archivist (Harry Shum Jr. of Glee and Crazy Rich Asians) who unearths a series of sinister pirate broadcasts and becomes obsessed with uncovering the dark conspiracy behind them.

While logging tapes of decades-old TV broadcasts, video archivist James (Harry Shum Jr.) discovers a surreal and disturbing clip that James believes is the product of a mysterious broadcast signal hacking. His discovery takes a sinister turn when he tracks down similar broadcast intrusions that send him on an obsessive mission. Now James must confront two very real possibilities: that the videos may be clues to a crime beyond all comprehension; and that whoever was behind them may be very aware that James is coming uncomfortably close to the truth.

The film stars Harry Shum Jr. (Glee, Crazy Rich Asians), Kelley Mack (The Walking Dead) and Chris Sullivan (This Is Us, Stranger Things). BROADCAST SIGNAL INTRUSION was inspired by actual broadcast interruptions that occurred in the Windy City in the late 1980s, and remain unsolved to this day. The film is an unsettling journey into our collective technological nightmares, confronting our deepest, darkest fears of both man and machine.

Also releasing is the film’s Original Motion Picture Soundtrack featuring composer Ben Lovett’s trumpet-driven, noir-inspired original score.  Variety noted Lovett’s music “encompassed both a giallo-type theme in a vintage Morricone mode,” while Forbes described the score as “the perfect soundtrack to drive down LA’s neon streets at midnight, and certainly the right score to hear while investigating nefarious happenings under a rainy overpass.” The album will be available on all major music streaming platforms October 22nd.

Novel Explores Surviving the Hood Like a Game of Cards

Video: Jenna Ortega Reveals Her Weird Side During Interview