Of Cemeteries and Monuments: Writing the Past

If you are interested in history, go to the cemeteries and pay attention to the monuments and statues. I hadn’t spent much time at cemeteries until I met my husband. Through his interest, I learned that they are fascinating places whether you’re finding illustrious people or unusual things. (Ghost tours are a great corollary to cemeteries that often find themselves within cemetery walls). Thanks to Roman Mars’s 99% Invisible and the “Always Read the Plaque” mantra, I’m more attentive to the markers around me. It’s even better when there are books that can help guide you through these places and markers so you can learn the history of the place and its people.

But how do you put together a book about cemeteries and monuments? I decided to talk to two historians who have recently published or will publish books about cemeteries and/or monuments. I talked with Tammy Gibson, entrepreneur, storyteller, travel historian, and author of Honoring The Legacy: A Guide of African-American Monuments and Statues (2020); and Adam Selzer, tour guide, speaker, and author of the forthcoming 2022 Graceland Cemetery: Chicago Stories, Symbols, and Secrets.

The Origin of the Book 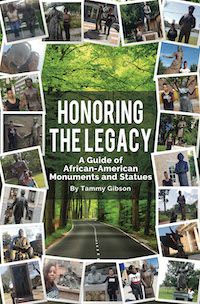 Honoring The Legacy: A Guide of African-American Monuments and Statues by Tammy Gibson

For Gabby, the book came out of her work as a travel historian. Gibson said, “I travel looking for anything that pertains to Black history” and take photos. One day she had a sudden thought — how many Black monuments and statues were there in the United States? The impetus to start the book came when Gibson looked at the infamous Robert E. Lee statue on the University of Virginia campus, a week after the neo-Nazi march, seeing in it a history of oppression and fear.

With the murder of George Floyd and COVID-19, Gibson decided to put the book together. She recalls hearing people on the radio talking about the Confederate monuments and saying that there were hardly any Black statues or monuments. She knew for a fact that wasn’t true. “That’s why I put the book together, because I want people to see that they are positive Black monuments and the statues that bring pride and beauty into a community.” And that’s how we got Honoring the Legacy.

Sign up for our weekly newsletter about historical fiction! Launching in September of 2021.

Selzer’s book also came out of his work as a tour guide. He often leads tours of Graceland Cemetery, possibly Chicago’s most famous cemetery, with the likes of Louis Sullivan, George Pullman, and Mies Van der Rohe. So, he had already started doing research for his tours. When asked why he wrote the book, Adam said, “Cemetery research is my favorite thing to do because you can get completely distracted and still be on topic. There’s 1,000s of things that you can research and everything leads to another thing.” 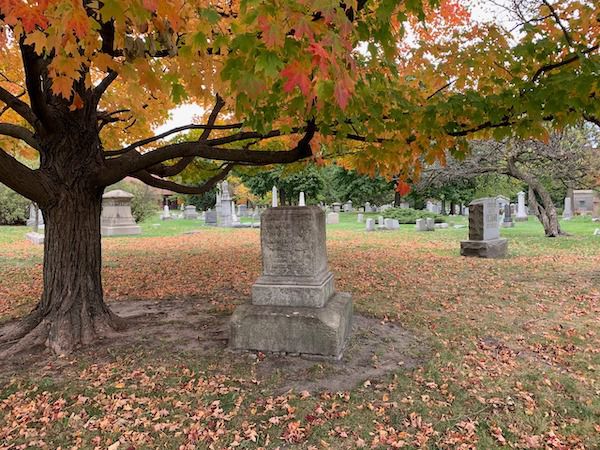 Photo: Tomb of Jeremiah Price by Adam Selzer. “People reminiscing about him later said he was possibly the most boring man who ever lived,” Selzer said.

When asked why these books are important, he cites the obvious example of people walking past a giant funeral monument and wondering “Who is that? How could they afford that?” But more importantly, he said, “A lot of the best stories are in nondescript or even unmarked graves. There are so many incredible stories that are definitely a part of Chicago history, but just kind of slips through the cracks. These are characters that everybody in Chicago knew about in their day. But if nobody writes about them again, 20 years after they die, they just get forgotten.”

The Structure of the Books

With these guides, figuring out how to arrange them is critical. Selzer decided to opt for a geographical approach within the cemetery instead of themes or professions. Selzer explains that he thought it was more egalitarian that way and that some people would fit in several categories. For each bio, he tried to open with a quotation to give readers a sense of these people. He explained, “I try to capture a bit of their personality. All of these people sang songs and played jokes and played games and got diarrhea and fell in and out of love and got diarrhea again.”

Gibson broke her book into a few sections. The bulk of it is the directory of 500 monuments and statues broken down by state and city, so people can locate all  the monuments in a single location. She also included a section on memorials to victims of lynching and other mob violence as well as a two sections on Black artists who make monuments and sculptures. The book has eight interviews with Black artists working today because Gibson though “it would be good to hear from them about their passion for Black art, and also their struggles being a Black artist in a white male dominant society.” She got the idea two weeks before the book was due to her publisher when she was watching an interview with a Black artist on television. 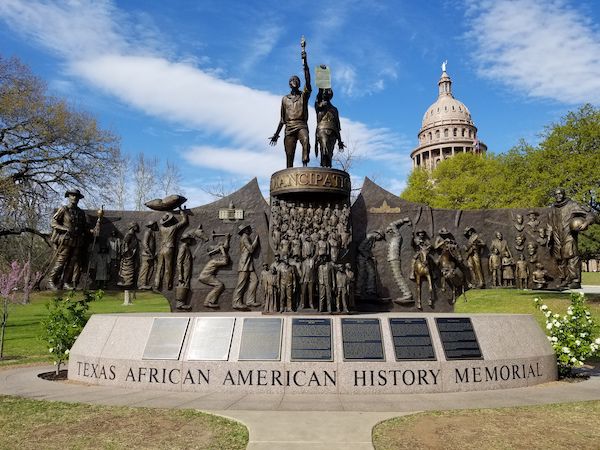 Photo: Emancipation by Tammy Gibson.
“For me it talks about how far we’ve come from slavery, Reconstruction, Jim Crow, to where we are today,” she said, citing it as one of her favorite monuments.

Putting these guides together is a monumental task and poses its own challenges. For Selzer, he mentioned that there are about 175,000 people buried in the cemetery, and figuring out the most interesting people was not easy. To aid in that endeavor, he decided to give “more space to people who don’t already have easily accessible biographies.” So for the famous folks, you can find information on their lives elsewhere. He was interested in the stories of folks who aren’t as well known but just as interesting.

But he also noted his sliding scale. If he had to choose between a white Civil War veteran and a Black Civil War veteran, the latter was included. Anyone who was born a slave was automatically included. Women who led particularly interesting lives went in over the male counterparts.

“I was very drained and tired. I’ll spend maybe two weeks in a particular state. I have a list of statutes that I found on the internet, and then I’ll just start driving around the whole entire state.” She’d also talk to local community members who might be able to give her intel on statues and monuments that were not listed online. She even got emails from folks recommending statues, and she’d go out to visit them. Sometimes she’d discover that the statue she was looking for had been taken down for a variety of reasons, including vandalism.

Since writing the book, she’s found an additional 50 more that she plans to include in a future edition.

The Takeaways from the Book

For Gibson, she said, “From reading my book, I want people of all races to know that Black history is American history…Our history is more than Martin Luther King Jr, Rosa Parks, and Harriet Tubman…There’s so many unsung heroes all over.” She recommends looking for Black monuments and statues in your own community.

Selzer says of his book, “I want them to have a whole different view of Chicago history. There’s a whole different world of Chicago and even American history that you can see by focusing on characters that are so well known in their day but that we don’t really talk about much anymore.”