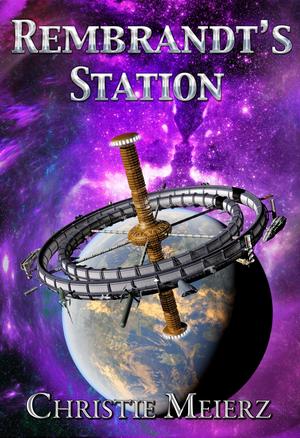 A trade officer navigates the tensions between his remote outpost and the rest of the galaxy in Meierz’s second SF novel in a series.

Albert St. John Rembrandt, “Bertie” to his friends, is the youngest son of the Duke of New Norfolk and scion to a pharmaceutical fortune back on his home planet of Britannia. He’s also the stationmaster at the orbital trade station above the planet Tolar—a world that recently emerged from millennia of isolation to sell its red dye and opals to merchants from the Interstellar Trade Alliance. He’s already made friends with the ruler of the planet’s equatorial Monralar province, a nameless man known only as the Monral. When two emissaries from Earth arrive, requesting to visit Monralar, Bertie sees it as an opportunity to get away from his station for a few days and visit with the Monral and his 5-year-old daughter, Farryneth. He soon realizes, however, that the emissaries are members of the Di Fata Johnson family—longtime rivals of the Rembrandts who’ve come looking for Laura, a relative who defected to Tolar decades ago (she happens to be someone whom Bertie knows well). It also turns out that the Johnsons are interested in acquiring and replicating a rejuvenating Tolari elixir, known as “Jorann’s blessing,” which prolongs youth and grants empathetic powers. Every human who lives on Tolar has taken it except for Bertie, who fears bonding himself to the Tolari. He’s torn between his wish to protect Tolar from outside exploitation and his desire to get in the good graces of his family, who also wish to profit off the blessing.

Over the course of this outer-space tale, Meierz offers readers vividly descriptive prose; it’s a fun mix of futuristic invention and digs at aspects of Earth society, as when Bertie considers the two Johnson guests from his home world: “He stifled a grin at the thought of these gentlemen living for several days with the crew of the Kekrax trade ship they’d taken to get here. As citizens of the Commonwealth of Boston, a bastion of Earth prudery, they had likely been utterly mortified by the indignities and embarrassments inflicted on them by the inquisitive little reptilians.” The multilingual, tea-loving Bertie proves to be a pleasantly idiosyncratic protagonist, and readers will find that getting to know the ways in which he operates is one of the novel’s greatest pleasures. There is also plenty of Dune-style space diplomacy—rival houses, trade disputes, and so on—to please diehard SF/fantasy fans, but beneath this veneer, the author tells a simple story of exile, the meaning of home, and the creation of a chosen family. The book is the fifth that Meierz has set in this fictional world and the second in the Exiles of the Drift series, and as a result, there’s a lot of mythology to catch up on. However, readers who are already familiar with this milieu will appreciate this thoughtful, often emotional contribution.

‘The Rookie’ Timeslot Move (and Chenford) Brings Highest Ratings in