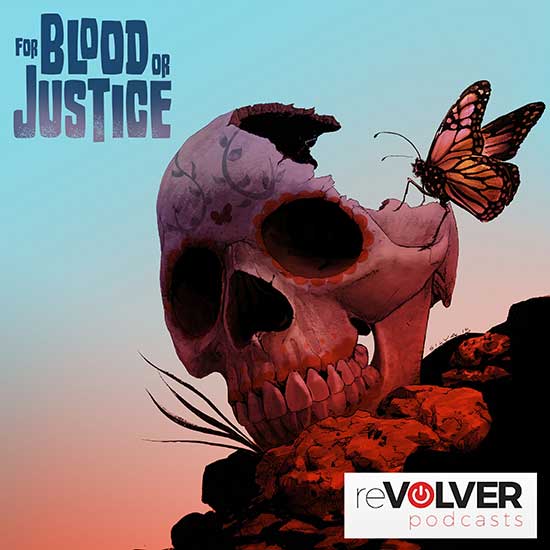 The eight episode, horror-noir audio drama For Blood or Justice announces their new distribution deal with global media platform reVolver Podcasts. The partnership will help the serial connect with wider audiences, marketing opportunities and the ever-growing U.S. Hispanic market. The immersive, highly cinematic series from indie filmmakers Todd Kniss and Scotty Weil, and that features the highly acclaimed Danny Trejo and other top talent, was born from the graphic novel of the same name. Produced to let audiences “see” their way through the gritty, period story, the episodes were intentionally performed without a narrator and the acclaimed and diverse cast, which performed over 60 roles, was drawn from film, tv and the voice over world. Sound design elements were also considered characters, selected to let listeners dive into the dark underworld and elicit the motion and emotion like no other serial available today.

The stylized and distinctive artwork from the companion graphic novel completes and complements the depths of the horror-noir world set in the summer of 1977. It was written and created by Kniss, edited and art directed by Eduardo Lopez, with pencil and inks by Wayne Lowdy, color by Gregory Albert and Sean Callahan, cover art by Paul Sylva, and lettering by Brian Wright.

Listen to the TRAILER

Creator/EP Todd Kniss shares, “As a lifelong fan of horror and gritty indie films, it is a dream come true to successfully meld genres into this contemporary format of horror-noir storytelling. We want listeners to fully immerse themselves and experience this story much like early radio shows War of The Worlds or Dark Shadows.”

EP/Director Scotty Weil adds, “It was important for us to produce this serial as if it were on camera. The incredibly talented cast embraced our vision and kept the bar very high. We truly feel there is no other scripted audio drama available today like ours.”

Jack Hobbs/CEO of reVolver Podcasts says, “As soon as I listened to the first episode of “For Blood or Justice” I knew we had to acquire it for reVolver. It’s unlike anything else we have on our platform – thrilling, terrifying and yes, charming- we are confident that we are the right partner to share it with the broadest audience possible.”

Synopsis: In 1977, a Texas lawman (Kellan Lutz) hunts two psychopathic killers across the no man’s land of Texas and into a Mexican border town where monstrous human experiments are being conducted by an escaped Nazi scientist (Xander Berkeley) and backed by a clandestine band of US Black Ops.

Content involves mature themes and may not be suitable for all audiences.