Summary and Review: Under the Whispering Door by T 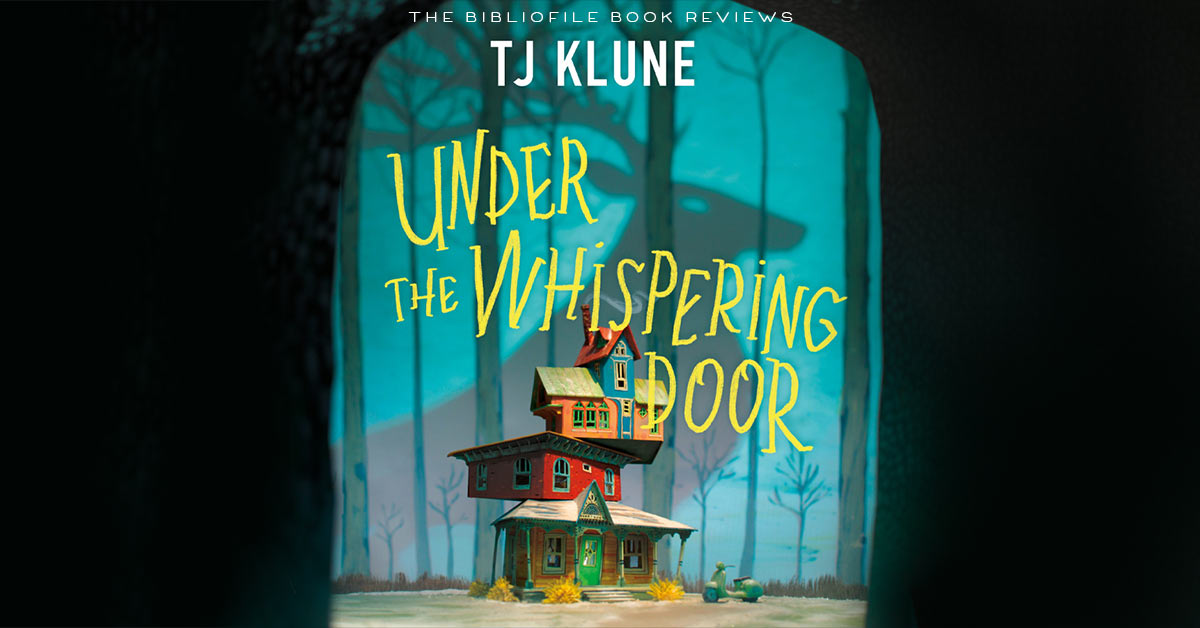 The two-paragraph version: Wallace is an unpleasant and selfish man who dies. He is brought to a tea house where the ferryman, Hugo, is there to help Wallace process his life and enter the doorway to the afterlife when he’s ready. At the tea house, Wallace befriends the others there and learns to care for and sacrifice for others. He also develops romantic feelings for Hugo.

When Wallace overstays his time, the Manager (a god-like entity) gives Wallace a hard 7-day limit before he needs to move on. During that time, Wallace makes amends with his ex-wife (he’s bisexual) and helps a grieving mother find closure. He also helps to rescue Cameron, who was a “Husk” (a ghost who had lost his humanity), which were previously thought to be hopeless cases. When it’s time to leave, the Manager agrees to let Hugo continue to work on rescuing other Husks, and the Manager decides to bring Wallace back to life so he can work as a Reaper (herding ghosts to the tea house) alongside Hugo.

Wallace Price is an unpleasant, calculating and selfish lawyer who dies of a heart attack. At his (sparsely attended) funeral, he’s greeted by Mei, a Reaper, who is there to bring him to the ferryman, Hugo Freeman. This is Mei’s first outing as a Reaper working solo.

Hugo and Mei run a tea shop called Charon’s Crossing Tea and Treats while also helping ghosts like Wallace to move on. There’s a door on the fourth’s floor that leads to the afterlife whenever Wallace is ready.

Meanwhile, Wallace process his thoughts here at the tea shop, but he cannot leave or else he will begin to disintegrate. He’s also tethered to Hugo via a cable that attaches to each of them and keeps Wallace from floating away. The ghosts of Hugo’s grandfather, Nelson, and dog, Apollo, reside at the tea shop as well.

Wallace initially tries to run away, but he comes across a horrifying creature. Hugo explains that the creature is Cameron, who is a ghost that ran away and became a Husk, which is what happens if you disintegrate and lose your humanity. Later, Wallace comes across Cameron again and when Cameron grabs at him, Wallace sees Cameron’s memories. He learns that Cameron had an unhappy childhood, but fell in love with a man named Zach. When Zach died three years later, Cameron became depressed and killed himself.

Meanwhile, during the day, Hugo runs the shop while Mei cooks in the kitchen. There’s an unhappy woman named Nancy who visits the shop regularly. At night, they all talk to Wallace to try to help him process his life. Wallace regrets now he neglected his ex-wife Naomi and let their marriage fail. He also thinks about how he had no friends and was not a nice person.

As Wallace gets to know the others, he and Hugo start to develop feelings for one another. He also learns that an entity named The Manager hired Hugo for this job soon after Hugo’s parents died in a car accident. As for Mei, she is a medium, and The Manager taught her how to navigate going back and forth from her human and spiritual self when she took on the job as a Reaper. Finally, Nelson has been dead for a few years, but he has resisted moving on since he wants to ensure that Hugo is happy and in good hands before he does. And Apollo has also resisted moving on since Hugo’s still alive.

One day, a woman named Desdemona comes to the store with her two associates. Mei gets very upset since she dislikes Desdemona and considers her a con artist. Desdemona is someone who does fake séances and pretends to sense spirits (and collects money for her services). One of the people she conned was Nancy (the unhappy woman who frequently visits). Wallace and Nelson decide to scare Desdemona off, and Mei feels grateful to them for doing so.

Eventually, Wallace learns that there was a Reaper before Mei who was not very good. When Cameron ran off, it was that Reaper who instructed Hugo not to follow him, resulting in Cameron turning into a Husk. Also, there was an incident involving a young girl ghost named Lea, who missed her mother, Nancy. Mei thinks Nancy must have minor spiritual powers since Nancy managed to track Lea’s ghost down at the tea house. Upon seeing her mother, Lea started freaking out. Instead of letting them calm her down, the Reaper forced Lea into the next world before she was ready. Her mother Nancy sensed something and continues back hoping to feel her again.

On Wallace’s 22nd day there, an angry ghost named Alan is brought to the tea shop by Mei. Alan was murdered in an alley by a person he owed money to. Alan is resistant to moving on, despite all their best efforts to help him. When he learns about the story involving Nancy and Lea, he tries to cause a scene with Nancy.

When the health inspector (Harvey) drops by, Alan notices a resemblance between Harvey and the man who killed them, though he’s aware they’re not the same person. Alan goes on a rampage and starts messing with Harvey. Finally, the Manager shows up and freezes time. He forces Alan to move on and he tells Wallace that he’s had enough time to process his death and that he needs to resolve his affairs in the next seven days, or else he’ll be forced to move on then as well.

Knowing he must make peace with giving up his happy existence at the tea shop, Wallace quickly goes through the stages of grief, but comes to accept his fate. He has Hugo call his ex-wife to apologize on his behalf for his actions and to try to make some type of amends. He and Hugo also take a trip to a spot where Wallace’s father used to take him as a boy. They also enact a plan to use Wallace’s ghostly presence to let Nancy know that Lea is safe and has moved on, so Nancy can find some closure.

Finally, when Wallace comes across Cameron again, he realizes that Cameron wants his help. He senses that Cameron is lost. When he reaches out to touch Cameron, he sees his memories of how the previous Reaper had been cold and scared Cameron, which his why he ran away from the tea shop and disintegrated. Wallace decides to do something selfless and he removes his tether (which connects him to Hugo) and attaches it to Cameron instead, not knowing what it will mean for him.

When Wallace awakes, he learns that Cameron is fine now, and that Mei managed to wrangle him (Wallace) from floating away by using Apollo’s dog leash. When he talks with Hugo, they realize that perhaps it’s possible there are more Husks that could be saved and that the Manager misled Hugo by making him think that they were lost causes.

When the last day arrives, the Manager shows up to ensure Wallace moves on, and they use the opportunity to confront him about the Husks. He declines to explain to them why he did what he did or what his plan is (saying that it’s beyond their comprehension and that everything worked out), but he reluctantly agrees to let them attempt to rescue the other Husks in existence.

Finally, as Wallace lets go and is about to pass through the doorway to the unknown afterlife, the Manager makes the impulsive decision to bring Wallace back to life. He says that he’s curious to see how this will go, and that Wallace will be working as a second Reaper alongside Mei and Hugo, since they’ll have a lot of work on their hands with all the Husks and whatnot. Afterwards, Wallace and Hugo finally kiss.

In the Epilogue, Mei has been training Wallace as a Reaper, and the trio has continued to save Husks and to help other spirits as well. Nelson understands that Hugo is happy and is in good hands, and he decides it’s time to move on. Hugo encourages Apollo to go with him, and they both go through the doorway together. The book ends with Mei telling them about the next ghost they’ll be working with.

If this summary was useful to you, please consider supporting this site by leaving a tip ($1, $2, or $4) or joining the Patreon!