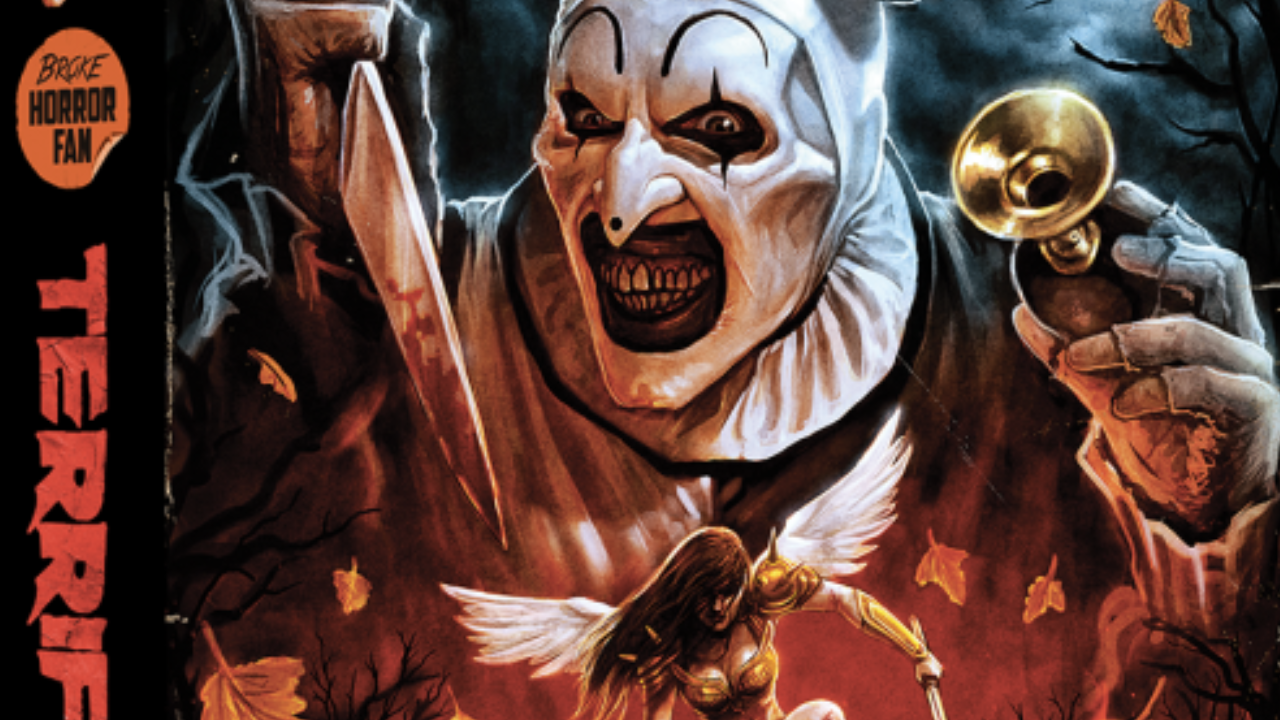 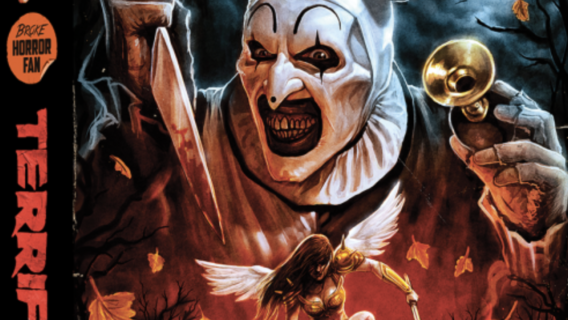 There isn’t much I miss more than wandering the aisles of the video rental store, staring at the VHS and DVD covers that would imminently haunt my nightmares. Something about VHS cover art hit different; it felt dangerous and cool. Intricately designed art maximized the hype around the film, imprinting in young minds and terrifying them before they even pressed play. While it feels like a lost art, there seems to be a resurgence not only in loving VHS cover art, but in making it for modern horror releases. So we thought we’d share some of the best and bloodiest to prove the VHS is alive and well.

Before we start, we do have an honorable mention for the upcoming film, Kill Her Goats. The only reason that the film’s VHS cover art doesn’t make this list is due to the fact that it’s yet to be released. The art, which you can see below, is just the kind of bloody nightmare fuel that would’ve captivated me in the video store. A goat seemingly ripping a woman apart? Sign us up. Plus, you can’t go wrong with art that looks slightly distressed to give in that perfect retro feel. 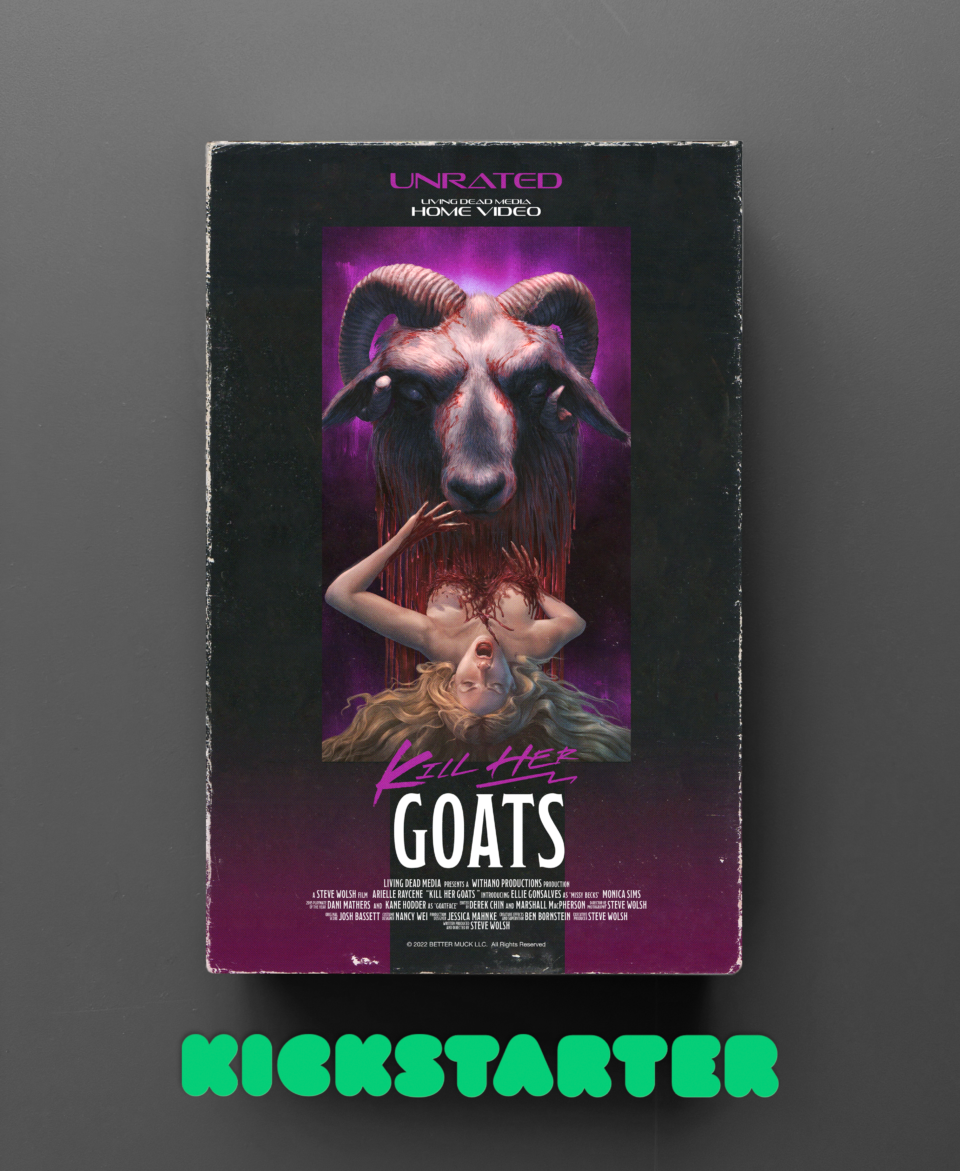 Does the art capture your attention? Then make sure to check out the trailer here. 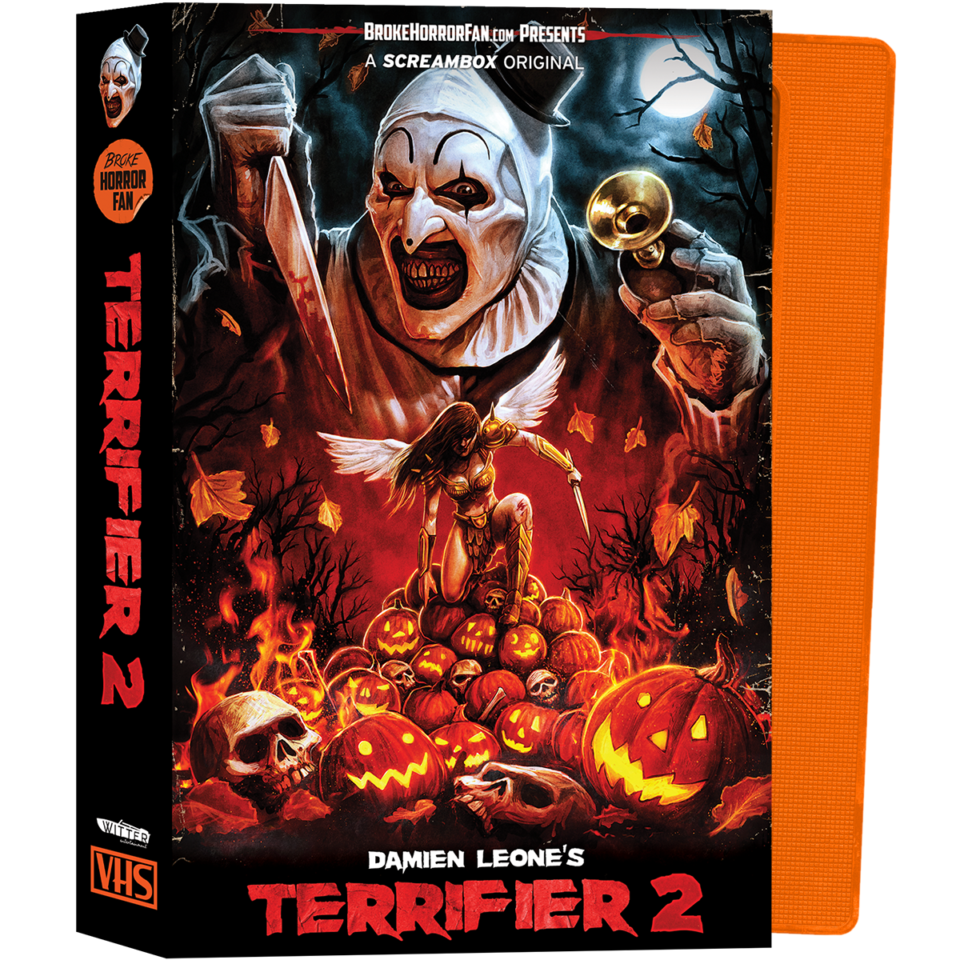 Terrifier 2 was a massive horror hit, and really, the epitome of an indie horror success story. Made for just $250,000, the film’s theatrical run grossed over $13 million at the box office. It’s proff that not only are the movies back, but that people have a taste for twisted horror titles. The follow-up to the first Terrifier follows the sadistic villain Art the Clown as he’s resurrected to terrorize more victims in Miles County. He takes a special liking to Sienna (Lauren LaVera) and her brother who must survive the bloodthirsty clown. Once again, director Damien Leone delivers disgusting kill after disgusting kill, with David Howard Thornton playing Art with terrifying glee.

Not only is this the type of movie that is perfect for VHS with its buckets of blood and viscera, but its poster design is perfect for VHS box art. The art by Sam Coyne is reminiscent of both fantasy novels of yore (mostly thanks to a badass Sienna posing on a pile of pumpkins) and retro horror posters that pique your interest but tell you almost nothing about the movie. It simply teases an epic battle between good and evil. Plus, the black on bright orange looks striking on any collector’s shelf. Nicolas Cage fighting deranged animatronics while trying to protect teenagers feels, again, very much a film from the 1980s. And the art design on the clamshell box for Willy’s Wonderland only hammers that home. Cage plays a mostly silent, nameless character who’s given a night shift cleaning an abandoned fictional Chuck E. Cheese in exchange for car repairs. But that one night is going to be hell. It’s very much Five Night At Freddy’s with a Nicolas Cage twist.

The VHS art plays with the destruction of fun and innocence with a vintage-looking arcade ad, complete with Disney-esque characters and bright, flashy colors. But, of course, that ad is torn to reveal Nicolas Cage bathed in blood-red light that would make Dario Argento smile. Plus, blood drips are incorporated into the art that makes the box itself look like it was splattered in blood. Psycho Goreman is full to the brim with hunky boys, ridiculous humor, and incredible practical effects. It’s a quintessential coming-of-age horror comedy that feels at home both now and in the 1980s. When an intergalactic alien overlord is awoken on Earth, he finds himself begrudgingly stuck with two young kids who name him PG, or Psycho Goreman. But as the film progresses, the space war comes to Earth and this ragtag group must save the world.

The poster art for the clamshell VHS just leans right into its comic influence and its nostalgic horror roots. Designed by Blitz Cadet, the limited-edition box art shows both the downright ridiculousness of the film (I mean just look at that giant brain with eyes) and the sheer size of its scale. Werewolves Within is arguably one of the best video game adaptations of all time. With a whip-smart script from Josh Ruben and a stellar ensemble cast led by Sam Richardson and Milana Vayntrub. Striking a perfect balance between horror and comedy, this was one of the best releases of 2021.

While the VHS art design, done by Neil Fraser, for Werewolves Within may seem more simple than the rest of the list, its use of color makes it stand out. Shades of red and purple and the ensemble cast, all pictured on the box, give it that retro feel. And really, who wouldn’t want a purple VHS tape in their collection? 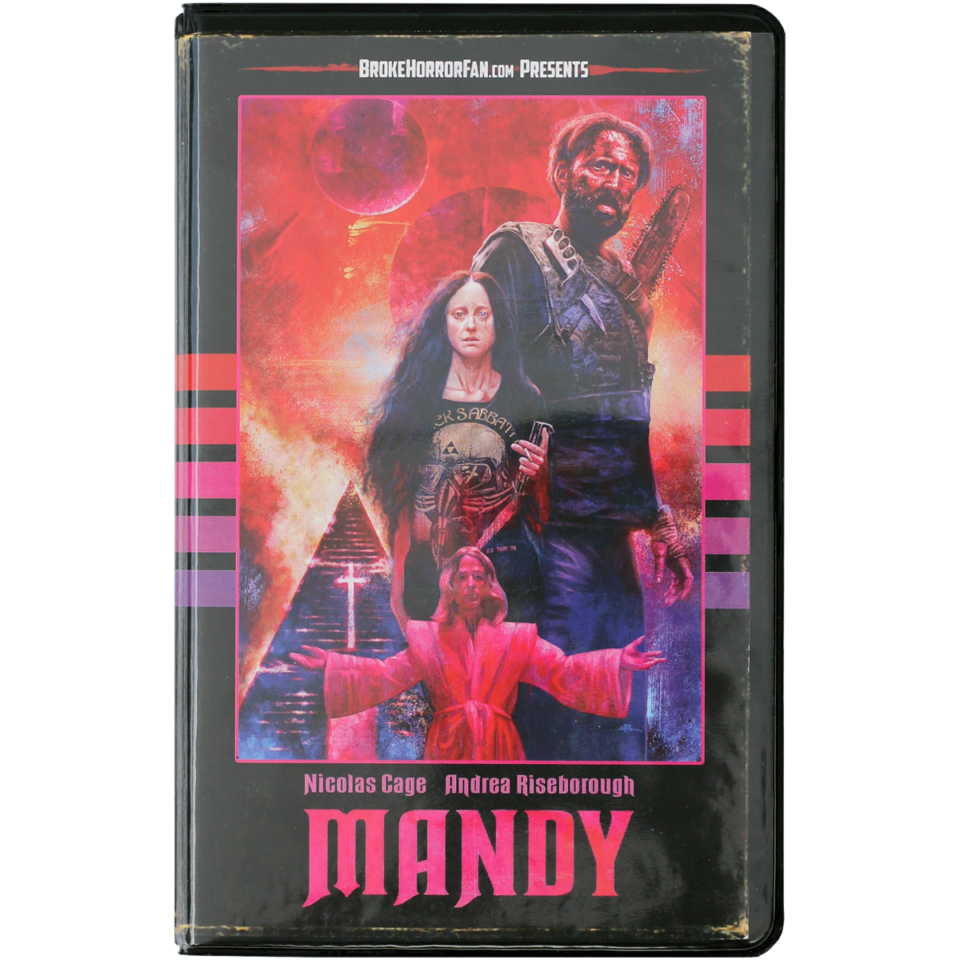 Last, but certainly not least, is Panos Cosmatos’ hallucinogenic, trippy film Mandy, again starring unhinged Nicolas Cage. But this time, he’s on a quest for revenge after the death of his beloved Mandy (Andrea Riseborough) at the hands of a dangerous cult. With a droning synth score by the late Jóhann Jóhannsson and dreamy visuals, Mandy is heavy on retro vibes as we follow Cage’s Red into hell.

This design for Mandy‘s VHS release, done by Vasilis Zikos, gets to the heart of the film’s essence: a neon-soaked nightmare that feels like something out of a banned sci-fi novel written in the 1970s. Plus, the added distressed details make this look like something you found in a family member’s basement or in the dark corner of a secondhand store. This design makes the VHS feel just a little bit cursed, and shouldn’t all VHS tapes have just a touch of that vibe?

The Kill Her Goats: Don’t Let VHS Horror Die Kickstarter runs from today until January 31st, 2023. Check out a look at the first clip Kill Her Goats below and tell us what you think!

For more info about the movie visit killhergoats.com.

‘Angry’ Fan Dressed as Jesus Gets Kicked Out of Exodus