‘The Innkeepers’ And the Horror of What’s Not Seen

The scariest scene of ‘The Innkeepers’ might not be what you think. 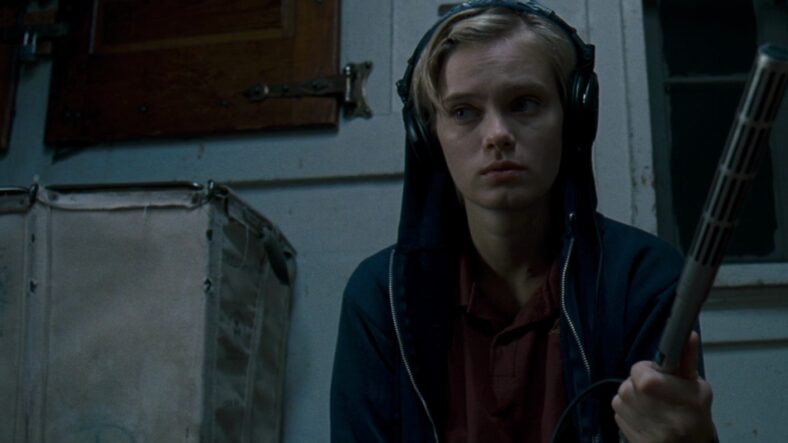 Ti West is back with a vengeance. If the reviews for X are any indication, audiences can look forward to a “devilishly sexy, deliriously gory throwback.” Throwback is the operative word there since vintage, lo-fi horror is all but currency to West as a filmmaker. While his television work with the likes of Scream: The TV Series, and even his last strictly horror feature, The Sacrament, have traded in more contemporary flourishes, West himself is imbued with the spirit of classic horror. This is perhaps no more evident than in The Innkeepers, his 2011 follow-up to The House of the Devil, the movie that in no uncertain terms placed him on the genre map.

A back-to-basics ghost story (with a misguided epilogue), The Innkeepers stars Sara Paxton and Pat Healy as the last two employees of the Yankee Pedlar Inn, a relic of the past open for just one more weekend. Allegedly haunted, the two take advantage of the vacancies to investigate the supposed paranormal goings-on. Packed with jolts, apparitions, and contemporary scares, it’s surprising that the scariest scene in The Innkeepers is an unexpected one.

Paxton’s Claire is especially interested in investigating the Yankee Pedlar Inn with sundry direct-from-Amazon ghost hunting tools. That desire is compounded by the arrival of guest Leanne (Kelly McGillis), a former actress and current ghost hunter. She all but confirms the hotel’s haunted history, namely the legend of Madeline O’Malley. Legend has it she’s a bride who died by suicide after being jilted at the altar two centuries prior. West’s best movie is Clarie’s characterization, ably supported by Paxton’s performance. The ennui of modern life, the threat of unemployment, and the lack of any noticeable ambition coalesce into a tragic portrait of a young woman desperate for anything.

With no grounding of any sort, ghosts are better than the minutiae of what life post-Yankee Pedlar entails. Madeline O’Malley isn’t just a ghost, but something Claire covets. A perennial life of infamy and legend– an impact so storied and profound, it transcends generations.

Desperate to prove the legend true, Claire and Healy’s Luke conduct EVP investigations, wander around in the dark. He also runs a website centered on the hotel’s supposed hauntings. Luke, despite his supposed interest, is mainly in it to spend time with Claire. He’s not very subtle in his feelings towards her. As the climax approaches, Claire is rightfully warned by Leanne to stay out of the basement. She throws all ghostly caution away and descends with Luke anyway, EVP equipment in tow. They sit in the dark near where Madeline’s corpse was allegedly hidden by the proprietors hundreds of years before, turn their headphones on, and listen.

And… nothing of note happens. During the minutes-long beat, there are disembodied voices and allusions to other forms of paranormal activity. But modern horror fans are primed to expect the worst. West frames the dark, vacuous space around them like most contemporary auteurs of the genre. During the protracted, near oppressive beat, audiences are ready for a face to appear, an apparition to pop out, or for something tactile; they’re waiting for a 21st-century scary to occur. It never does. Fully grounded in the horror adage where what’s unseen is scarier than what is, West lets audiences fill in the blanks. The crackles and pops might belong to the walking corpse of an old man around the inn, and the wails are almost certainly Madeline’s. It’s just as likely it’s wind from the staircase leading outside.

The entire sequence is indicative of West’s inimitable approach to horror filmmaking. While his beat is abounding with homage, allusion, and clear emulation, he’s just as likely to place an enormous amount of faith in the audience. He’s deliberate in his scares, eager to let the audience occasionally craft scares of their own; the enduring kind that persist long after the credits roll. The kind of scares that haunt and linger in the dark absent the warm security of a television’s glow.

The Innkeeper’s basement sequence does pivot the film firmly into third-act territory. Luke is thoroughly afraid enough to flee the hotel, leaving Claire alone to contend with whatever spirits remain. From there, West still impresses, though with arguably more expected beats. There are quick cuts, ghostly visages, and apparitions appearing right behind an unsuspecting Claire. If anything, though, it renders West’s patience during the basement sequence all the more impressive. While The Innkeepers might not be West’s most assured outing (though it is, for what it’s worth, my favorite thing he’s done), it’s proof of a filmmaker continuing to evolve and adapt. He isn’t just classic in mood and style. No, he’s classic in his profound, thorough appreciation for horror filmmaking in all aspects. More than anything, The Innkeepers proves that.

‘The Munsters’: Rob Zombie Announces When We Will See The

Paris Hilton Turned Down DJing For President Joe Biden To

Iggy Azalea’s Son Onyx Kelly: Everything To Know About Her

Our All-Time Favorite Parodies From the MTV Movie & TV

9 Stores to Shop If You Love PacSun