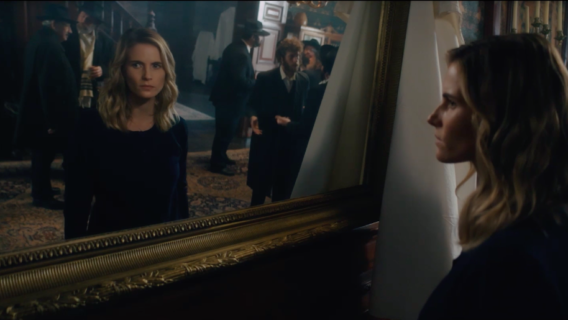 Jewish mythology is scarcely seen in the horror genre. Recent releases such as The Golem and The Vigil have started to pave the way, but we have a long way to go, especially in comparison to Catholic-focused horror. But director Oliver Park is helping shift the tides with his new horror film The Offering. And we have an exclusive clip that showcases the scares The Offering has in store for you.

In the wake of a young Jewish girl’s disappearance, the son of a Hasidic funeral director returns home with his pregnant wife in hopes of reconciling with his father. Little do they know that directly beneath them in the family morgue, an ancient evil with sinister plans for the unborn child lurks inside a mysterious corpse.

Watch our exclusive clip from The Offering:

In his review of the film, Dread Central’s Tyler Doupé said:

From the get-go, The Offering is somber and atmospheric. It immediately evokes a sense of palpable dread. Even before I fully knew what was in store, it was evident that director Oliver Park possesses a keen understanding of establishing atmosphere… The film takes full advantage of the foreboding nature of the mortuary setting where the bulk of the picture unfolds. The locale inspires a sense of unease that makes even the innocuous feel menacing.

The Offering comes to theaters and digital on January 13, 2023.