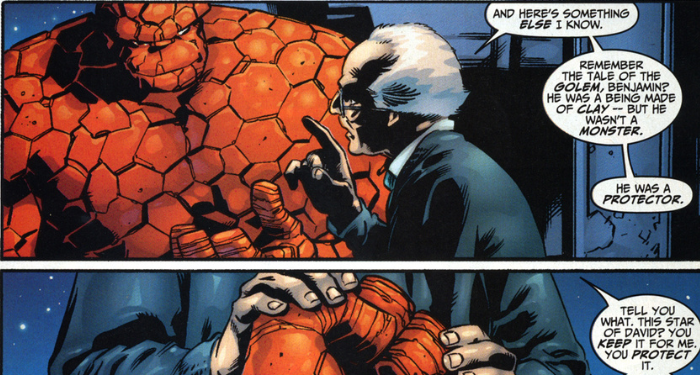 There are hundreds of Christmas stories in superhero comics, and plenty for secular or secularized holidays like Thanksgiving, the Fourth of July, and Valentine’s Day. There’s even a handful of Hanukkah stories. But as far as I know, there’s only one Yom Kippur story. And it’s one of my very favorites. 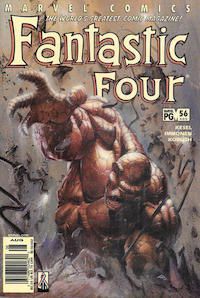 That story is Fantastic Four #56 (August 2002), by Karl Kesel and Stuart Immonen. It’s called “Remembrance of Things Past,” and as the title suggests, it delves into the past of…well, the Thing, AKA Ben Grimm.

In the story, Ben returns to Yancy Street, the fictional street on Manhattan’s Lower East Side where he grew up. As he walks through the rundown neighborhood, we see a series of flashbacks, all involving Ben’s misspent youth as a member of the Yancy Street Gang and his turbulent history with the local pawn shop owner, Mr. Sheckerberg, culminating in Ben stealing Sheckerberg’s treasured gold Star of David necklace.

Sign up to The Stack to receive Book Riot Comic’s best posts, picked for you.

The present day Ben finally arrives at Sheckerberg’s Pawn Shop, where Sheckerberg greets him with a baseball bat in hand. Someone has been leaving threatening notes, demanding that Sheckerberg pay protection money, and he assumes that it’s Ben and the Yancy Street Gang.

Ben denies any involvement, and goes out to confront the gang, which he hasn’t been a member of since he was a teenager. The gang members pelt him with garbage, paintballs, and hoses, while gleefully mocking him. Annoyed but unhurt, Ben returns to the pawn shop…to discover that the real villain, the Z-list Powderkeg, has shown up.

Powderkeg knocks out Sheckerberg, but is quickly subdued by Ben (with the timely assistance of the Yancy Street Gang). First responders have already been called, and Ben is afraid that he will hurt the elderly Sheckerberg further if he attempts CPR, so with no other options…he prays. In Hebrew. Specifically, the Sh’ma, which is said during both morning and evening services, as the final prayer on Yom Kippur, and traditionally, as the last words before death. 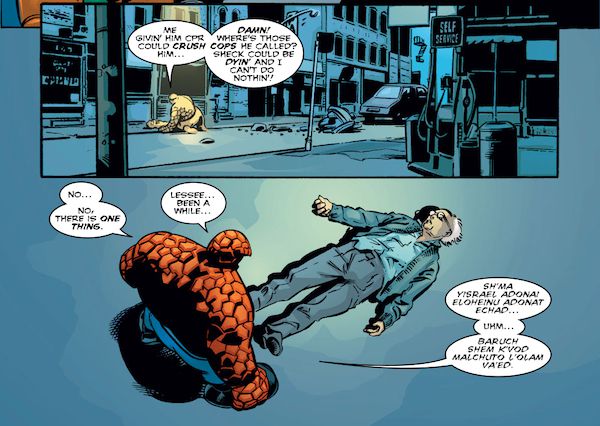 This was a big deal. Like the vast majority of Golden and Silver Age comic book characters, the Fantastic Four was created by Jewish men: Stan Lee and Jack Kirby. But Ben in particular had been understood by many readers to be Jewish for decades, at this point. His origins on the Lower East Side, at one time a famously Jewish neighborhood, were a clue, as was the way his rocklike body evokes the golem of Jewish folklore. So was the Hanukkah card Jack Kirby sent out in 1976, featuring Ben in a yarmulke and tallit (prayer shawl), holding a prayer book with Hebrew on it and standing next to a menorah. But it had never before been stated outright in a comic book…at least not until this one, 41 years after Ben first debuted.

Sheckerberg, thankfully, is fine, and quickly brushes off Ben’s concern for him, changing the subject to say he’s glad Ben hasn’t forgotten everything he’s learned at temple. “All these years in the news, they never mention you’re Jewish,” he adds. “I thought maybe you were ashamed of it a little?” 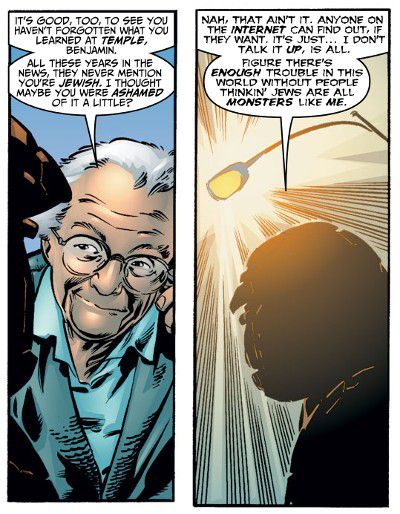 “Nah, that ain’t it. Anyone on the internet can find out, if they want,” Ben says, in a metatextual wink to the reader. “It’s just…I don’t talk it up, is all. Figure there’s enough trouble in this world without people thinkin’ Jews are all monsters like me.”

He then explains the real reason he’s come to Yancy Street: to return Sheckerberg’s Star of David that he stole all those years ago, because he’s pretty sure today is the Day of Atonement — better known as Yom Kippur. Sheckerberg barks at him that it is absolutely not Yom Kippur. Considering that this comic was released in June (comics were traditionally given cover dates a couple months later than their actual release dates), Ben is hilariously off. I have no idea why Marvel decided to publish what is still at heart a Yom Kippur comic four months early, but it winds up being an effective way to highlight Ben’s uneasy disconnection from his faith and heritage.

Because at the end of the day, that’s what this story is about: Ben’s conflicted feelings about his past, his childhood home, and his religion. We see this in his mistake about the date and the way he has to rack his memory for the right words for the prayer, but also in the heavy involvement of the Yancy Street Gang. The Yancy Street Gang goes all the way back to the early Lee and Kirby days, debuting in Fantastic Four #15 in 1963, and has been used frequently by many writers since, and not just in Fantastic Four comics. They’re almost always comic relief, relentlessly pranking Ben, while at the end of the day being staunchly on the side of good and secretly proud of their prodigal son, and this comic is very much in that tradition. It even shows the gang as mostly just hands and arms reaching from off-panel, the way Kirby always did.

Many have interpreted the Thing as Kirby’s alter ego, with his turbulent relationship with the Yancy Street Gang as symbolic of his own complicated relationship with his working class Jewish background. Much of that is made textual in this comic, when Sheckerberg asks why Ben simply took the gang’s abuse when he could have handled them as easily as he did Powderkeg. He theorizes that Ben feels guilty that he got out and the gang didn’t.

“You think you left this place behind? No — you just put it aside for a while in a little spot inside you,” Sheckerberg says. “What you learned on the street, what you learned at the synagogue — when you need those things, you can always go to that spot and get them back!” 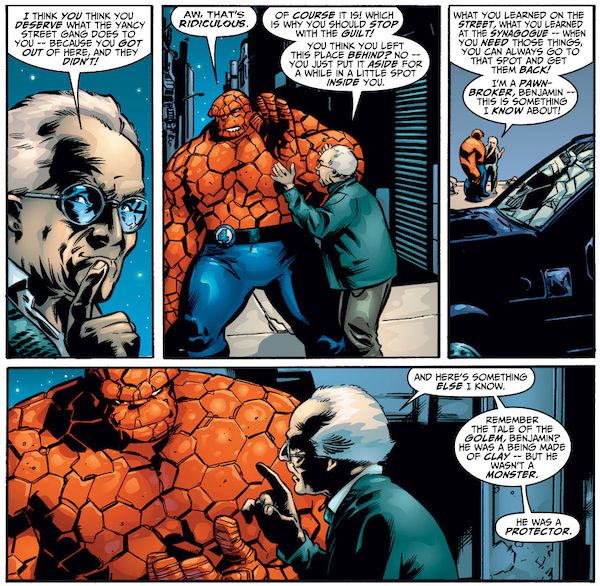 I’m not particularly religious, but this is the part of the issue where I usually start crying.

Sheckerberg ends by reminding Ben that the golem of myth is not a monster — he’s a protector. But those of us who love the Thing already knew that. 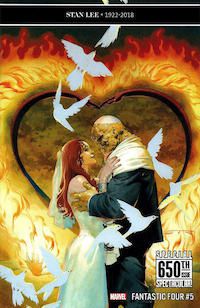 After “Remembrance of Things Past,” Ben’s Judaism didn’t suddenly become a central facet of the character, but the comics no longer had to talk around it. A couple years after this issue, Ben had a bar mitzvah to celebrate having been the Thing for 13 years. In 2018, he married his longtime girlfriend Alicia Masters in a Jewish ceremony. (Just the cover of that issue made me cry. Admittedly, I cry easy.)

Pop culture generally depicts Judaism and Jewishness in very limited ways, but I love this story and Ben in general for showing more ways of being Jewish. I love Ben’s conflict and his questioning. I love how earthy and pugnacious he is, so different from the usual stereotypes we’re fed. I even love the little things, like the cadence of Ben and Sheckerberg’s dialogue, specific accents that we are losing as the last century’s immigrant Jewish and regional New York dialects fade away, but that always sound like home to me.

But most of all, I love that Ben is allowed to be Jewish out loud now, and that this story made it happen.

Happy New Year to all who celebrated this week! May it be a sweet one, and require as little clobberin’ time as possible. (But not zero clobberin’ time. Ben wouldn’t like that.)

Novel Explores Surviving the Hood Like a Game of Cards