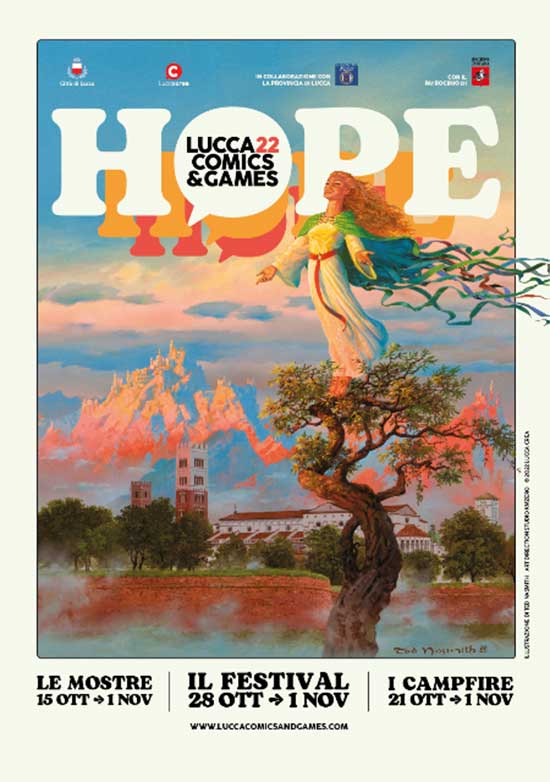 On 31st October, the director will be in Italy for the European Fan Screening of the first episode of Wednesday, the highly anticipated series starring Jenna Ortega as Wednesday Addams, debuting on Netflix on 23rd November. Burton has thrilled the global audiences with iconic films such as – among others – Beetlejuice, Batman, Edward Scissorhands, The Nightmare Before Christmas, Frankenweenie and directed the first 4 episodes of Wednesday created by Alfred Gough & Miles Millar.

For 5 days, the medieval town of Lucca in Tuscany will become the epicenter of pop culture through a festival that occupies the whole city and brings to Italy the best of games, video games, TV series, anime, manga, cosplay and fantasy fiction from the best creatives around the world. The theme for the 2022 edition is HOPE.

The festival will also celebrate Atari’s 50th anniversary with founder Nolan Bushnell attending. Named by Newsweek magazine as “I”, Bushnell is the creator of the first large-scale coin-op (Computer Space), and creator of Pong. He will participate in debates and insights related to the gaming world every day of the festival. His career will also be presented via an exhibition.

CD PROJEKT RED will be celebrating its 20th Anniversary at the festival. The creators of The Witcher series of games, Cyberpunk 2077, and GWENT: The Witcher Card Game, will host a number of activities at Villa Bottini, the 16th-century palace located in the fascinating center of Lucca. The garden will serve as a portal to Toussaint, which players had the chance to explore in Blood & Wine, the second of The Witcher 3: Wild Hunt’s expansions. Visitors will be able to participate in an immersive Witcher-themed treasure hunt, take part in various crafting activities, as well as join in on other attractions, all brought to life with the help of experienced live-action role-playing professionals and cosplayers.

Moving inside the villa, the studio will be hosting a special exhibition showcasing many rare and never-before-seen artifacts spanning 20 years of the studio’s game-making history, as well as a Cyberpunk 2077 & The Witcher art gallery, displaying historically inspired works from across both franchises and panels with special guests. But the celebration is even bigger than this: on 28th October, at Palazzetto dello Sport, a concert specifically conceived for Lucca Comics & Games in collaboration with Teatro del Giglio, will be dedicated to The Witcher 3: Wild Hunt and its expansions. Tracks will be performed by musicians from the Fiesole’s Orchestra Giovanile Italiana (the Italian Youth Orchestra), accompanied by the Polish folk metal band Percival Schuttenbach. From the podium, an exceptional guest will be conducting: Eimear Noone, author of 26 film and video-game scores, among which World of Warcraft. Eimear is the first woman ever to conduct at the Academy Award Ceremony, and her music has reached more than 100 million people in the world in 15 years. On 29th October, CD PROJEKT RED will host an official Community Party for invited members of the studio’s community to talk, meet with REDs. For more information regarding CDPR’s 20 years celebration at Lucca Comics & Games 2022, visit the dedicated website.

Toei Animation is proud to bring to Lucca Comics & Games 2022 the Italian premiere of One Piece Film: Red, in collaboration with Anime Factory. The event will feature appearances from Director Goro Taniguchi and Director of Animation Masayuki Sato. There will be live drawing sessions, signings and the biggest One Piece karaoke of all time! Fan activities will also be able to enjoy a Treasure Hunt which will occupy the entire walled city of Lucca.

Set in over 10,000 square meters the iconic Carducci Pavilion returns, it will host over 150 exhibitors from the Games world, including board games, role-playing games, miniatures at Miniature Island and collectibles.

The Performance Area, where artists paint live at Lucca Comics & Games, will also be present gathering Masters of fantasy art and artists of Luk For Fantasy.

There will be exhibitions dedicated to the great Masters. There will be a show dedicated to the centenary of the birth of Game Designer Alex Randolph at Palazzo Ducale. The works, exhibited for the first time in Italy, include unpublished illustrations in collaboration with the Deutsches Spielarchiv Nürnberg, Studio Tapiro and Studio Giochi. Inside the Carducci pavilion, there will be an exhibition dedicated to John Blanche, the undisputed master of dystopian fantasy, illustrator and art director for Game Workshop starting from 1984. He will come to Italy to meet his fans and present Voodoo Forest the legendary work he has been developing for more than ten years.

The the event poster was created by Canadian artist Ted Nasmith, master of ‘Imaginative Realism’. He is known for his illustrations of J.R.R Tolkien’s works of The Hobbit, The Lord of the Rings, and the cover for the first edition of The Silmarillion, a posthumous work edited by Christopher Tolkien.

Emanuele Vietina, Director of Lucca Comics & Games, says, “For us, this is the year of HOPE, a concept that has passed through generations by the great novels, movies, comics and tv series. Our community – the biggest convention community in the Western world – comes together again in Tuscany, to meet and greet iconic guests, attend world premieres and discover the latest releases from the best publishers in the planet”