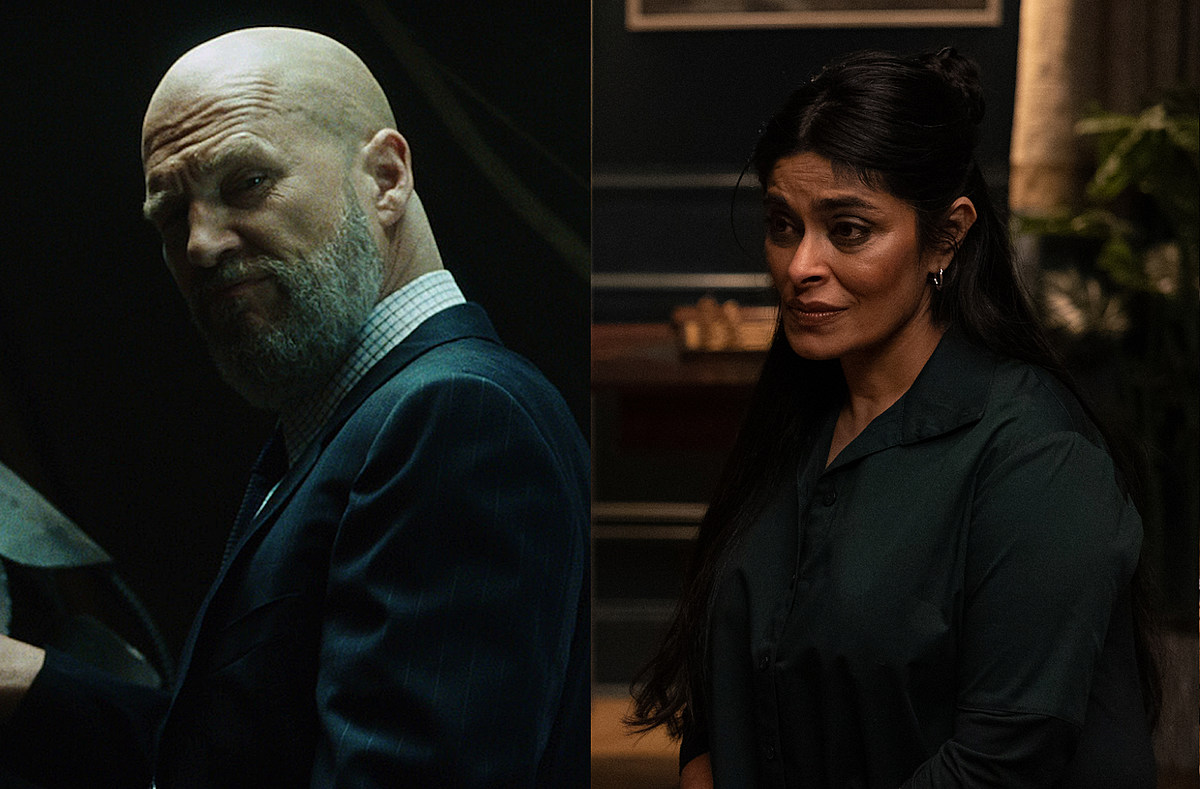 This week’s Ms. Marvel has one of the least surprising surprises in the history of the Marvel Cinematic Universe. (In other words: spoilers ahead, should you care about such a thing.)

Kamala Khan (Iman Vellani) just acquired super powers, but doesn’t quite know where they came from. Her origin is explained in full by Najma (played by Nimra Bucha), a warm and friendly woman who helped Kamala avoid arrest after a rescue mission gone wrong. Najma reveals that Kamala’s magic bangle serves as a conduit for her powers, which are drawn from her ancestors — one of whom was a member of an ancient interdimensional race known as the Clandestines.

Najma goes on to describe where the bangle came from, and how Kamala’s great-grandmother found it. In a sweetly supportive voice, she encourages Kamala to embrace her destiny and to use the bangle to send the exiled Clandestines back to their home. She lets Kamala return home to decide what to do and to explore her powers more fully.

So obviously about three scenes later Najma turns out to be pure evil and attempts to kill Kamala and her entire family in order to steal the bangle.

None of Najma’s actions will shock longtime Marvel viewers. She is just the latest example one of Marvel’s stock villain types: The seemingly benevolent mentor who is secretly a power-mad conqueror. At this point the company has repeated this trope so many times, it’s completely lost its ability to startle an audience.

It probably doesn’t help that Marvel Studios’ very first villain was a mentor-gone-bad figure. That was Iron Man’s Obadiah Stane, played by Jeff Bridges. Stane was Tony Stark’s father’s partner in Stark Industries; after Tony’s dad’s death, Stane kept the company running until Tony was ready to take over the business.

Or so Obadiah Stane would have us believe! In fact, he’s secretly hired a terrorist organization known as the Ten Rings to kill Tony so that he can control Stark Industries. When that plan fails, he steals Tony’s Iron Man tech and creates his own suit of armor to use against his former friend.

Time and again, whenever Marvel doesn’t have a really well-established canonical villain to draw on for a particular movie or show, their default choice is an evil mentor figure. In Guardians of the Galaxy Vol. 2, they rewrote the backstory of longtime Marvel Comics’ character Ego the Living Planet (played by Kurt Russell) to make him a kindly cosmic being who spent decades looking for his missing son, Star-Lord.

Or so Ego would have us believe! In fact, Ego wants to steal Star-Lord’s power for himself.

20. Ego from Guardians of the Galaxy Vol. 2Marvel

A handful of movies later, the amnesiac Captain Marvel believes she works for a peacekeeping group of warriors known as the Starforce. Her closest ally is the team’s leader, Jude Law’s Yon-Rogg. He only to want to help Captain Marvel save the galaxy as a member of Starforce.

Or so Yon-Rogg would have us believe! In fact, Yon-Rogg is responsible for the accident that gave Captain Marvel her powers and erased her memory. He wants to take that power for himself, and he’ll kill Captain Marvel to get it.

Two movies after that, Spider-Man gets his own evil mentor in the form of Far From Home’s Mysterio. In the film, Mysterio presents himself as a displaced hero from another reality.

Or so Mysterio would have us believe! In fact, he is an illusionist and special effects wizard who uses advanced drone technology to make it appear that he possesses superpowers. He wants the technology that Iron Man bequeathed to Spider-Man before he died, and he uses the ruse that he’s a wayward soul from across the multiverse to get it.

In the last few years, the secretly evil mentor trope has become even more ubiquitous at Marvel. The Eternals spend most of their movie believing they are on Earth to protect the populace from the evil Deviants, only to realize that their Celestial master Arishem wants to destroy Earth and that he has been lying to them about their true purpose for centuries. Doctor Strange in the Multiverse of Madness opens with an alternate dimension Dr. Strange trying to steal America Chavez’s powers. (“You’re killing me!” she cries as he leaches her dimension-hopping energy. “I know!” the bad Strange replies.)

Most of the recent Disney+ shows have had some form of sinister mentor figure too. In Hawkeye, Kate Bishop discovers her mother works for the Kingpin. In Moon Knight, Marc Spector and Steven Grant learn that the Egyptian god Khonshu may be manipulating them to his own less-than-noble purposes. And now there’s Ms. Marvel, which barely goes a full episode before revealing that Najma and the Clandestines are not helping Kamala out of the kindness of their hearts.

And all these examples don’t even include the more generalized surprise villains in Marvel movies and shows, like Laurence Fishburne’s Bill Foster from Ant-Man and the Wasp, or the less overtly sinister (but still morally ambiguous) mentors like the Ancient One from the original Doctor Strange, who lies to Strange about where her immorality comes from.

2. If the Ancient One Knows Dr. Strange Will Become the Greatest Sorcerer, Why Doesn’t She Also Know She Should Give Bruce Banner the Time Stone?Marvel

After 28 movies and a half-dozen television shows, it’s difficult not to repeat yourself occasionally. And many of Marvel’s movies and comics willfully and deliberately recycle the same basic story elements over and over: The arrogant jerk who discovers the importance of selflessness and responsibility; the team of outsiders coming together to learn the power of friendship and teamwork. For longtime Marvel fans, there’s a certain amount of pleasure in watching these stock beats over and over.

But where those general beats are meant be familiar, these mentor figures are meant to astonish us. After so many of them in a row, they simply don’t anymore. When a character like Najma shows up in a Marvel movie or series, you know it’s only a matter of time before they break bad and reveal their true colors. Marvel would be wise to paint their antagonists with some different shades, at least for a little while.

(Or so I would have you believe.)

Every Marvel Cinematic Universe Movie, Ranked From Worst to Best

It started with Iron Man and it’s continued and expanded ever since. It’s the Marvel Cinematic Universe, with 28 movies and counting. But what’s the best and the worst? We ranked them all.

Regarding Claims Of Unhygienic Circumstances, Kylie Jenner Has Reacted