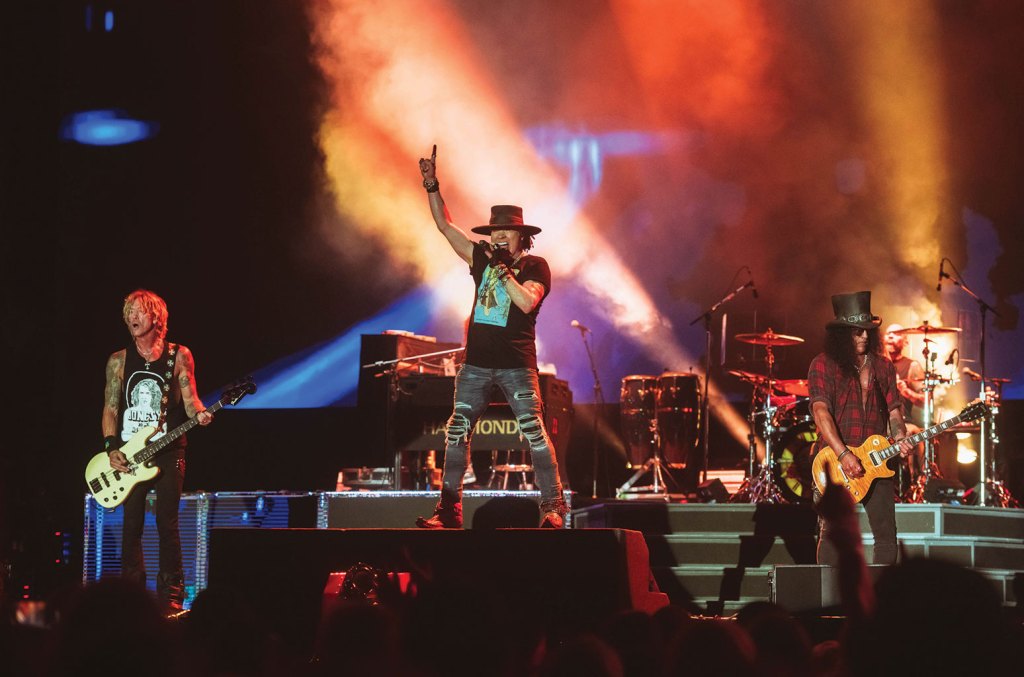 The country music superstar, a longtime GNR fan, stepped onstage midway through the show to assist the legendary rockers with “Sweet Child O’ Mine” and she later returned during the encore for “Paradise City.”

Underwood was visiting the United Kingdom to promote her ninth studio album, Denim & Rhinestones, which arrives on June 10. The upcoming set follows her 2020 holiday release, My Gift, and her 2021 gospel project, My Savior.

“Ladies and gentlemen, from Nashville, Tennessee, Miss Carrie Underwood,” GNR frontman Axl Rose told the crowd when introducing Underwood, who is known to cover the band during her own live performances.

This wasn’t Underwood’s first time sharing the stage with Rose. The country singer was joined earlier this year by the rock icon during her headlining set at the Stagecoach Festival in Indio, Calif. After duetting on “Sweet Child O’ Mine and “Paradise City,” Underwood told festival-goers that it was “the best night of my life.”

Underwood also spoke about the unforgettable onstage experience with Rose during a recent interview with Billboard.

“Axl was my pinnacle moment, the one that I’ve been waiting almost my whole life for,” the singer-songwriter said. “I had previously asked him about other things, if he would be interested in singing, and it never quite panned out. So I like to think I just wore him down. I wrote him a letter — an email — and explained why I really wanted to sing with him. I was like, ‘You are such an influence on me and my music. I think it would be wonderful and we would burn the stage down together.’ And he finally said yes. At the end of my letter, I was like, ‘If you can’t do it this time, I understand, but I will keep asking.’”

In late April, “Sweet Child O’ Mine” ruled Billboard‘s Hot Hard Rock Songs for the first time after being featured in the trailer for the Chris Hemsworth-starring superhero movie Thor: Love and Thunder. The classic track — from GNR’s debut album, Appetite for Destruction — topped the Billboard Hot 100 for two weeks in 1988, becoming the group’s first of six top 10s. “Paradise City” peaked at No. 5 on the Hot 100 in 1989.