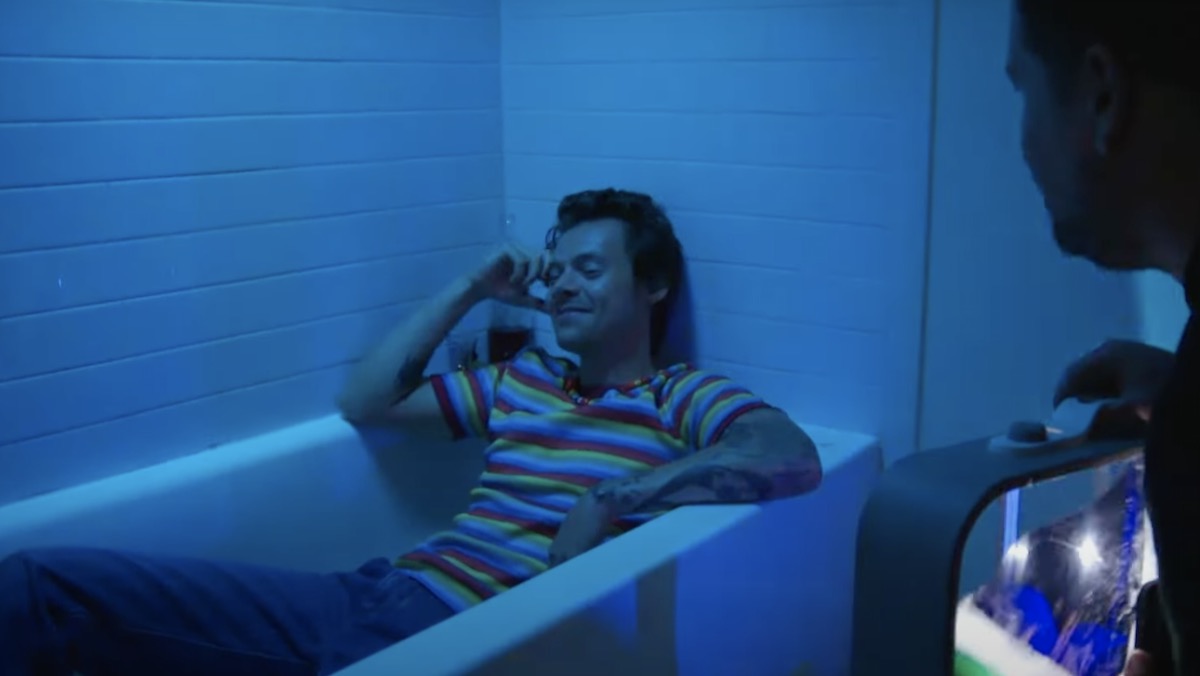 Harry Styles stopped by The Late Late Show with James Corden recently for the ultimate artistic challenge: to make a music video for his new song “Daylight” directed by James Corden in just three hours.

And it wasn’t a music video filmed on a fancy set in Hollywood. No, the former boy bander had to find a real-life apartment in New York City to shoot on location with a budget of just $300. After getting turned down by a couple of Brooklyn baby boomers, Corden and Styles lucked into an apartment of four millennial girls more than happy to welcome them in.

Hilariously, a tour of the apartment proved that one of the girls happened to be a Styles superfan, with Corden hurriedly hiding the Harry Styles-as-Harry Potter artwork and other assorted One Direction paraphernalia before the pop star could see. The host, however, was even less thrilled by a framed picture in the kitchen of the girls posing with Jimmy Fallon.

After raiding a few of the closets, Corden came up with a vision for the video on the fly, pointing Styles into the bathtub for a “sexy as fuck” opening to the Harry’s House album cut — though the superstar meekly requested to keep his shirt on for the shot. “I can’t stress this enough: this was all James’ idea,” he later adds in a confessional from the bathroom. “I was in a Christopher Nolan movie; now this is my dressing room.”

From there, the talk show host puts the four girls to work cutting up confetti and inviting a few friends over for a raucous house party scene while Styles remains amusingly nonplussed by the entire ordeal. (“Should we just scrap it? Is to too late to just do a ‘Carpool Karaoke?’”) Eventually, the whole thing culminates with Corden and Styles on the roof of the building — the former in a green screen body suit while the latter wears a sparkly gold fedora and oversized bowtie lifted from one of the girl’s closets. Watch the “Daylight” video come together below.

Styles recently covered Wet Leg’s “Wet Dream” during his BBC Radio 1 Live Lounge session and read a bedtime story for BBC’s CBeebies program. You can also get tickets for his Love on Tour 2022 here.

‘Christmas Story’ Sequel, Getting ‘Pickled’ on CBS, Marital Discord in