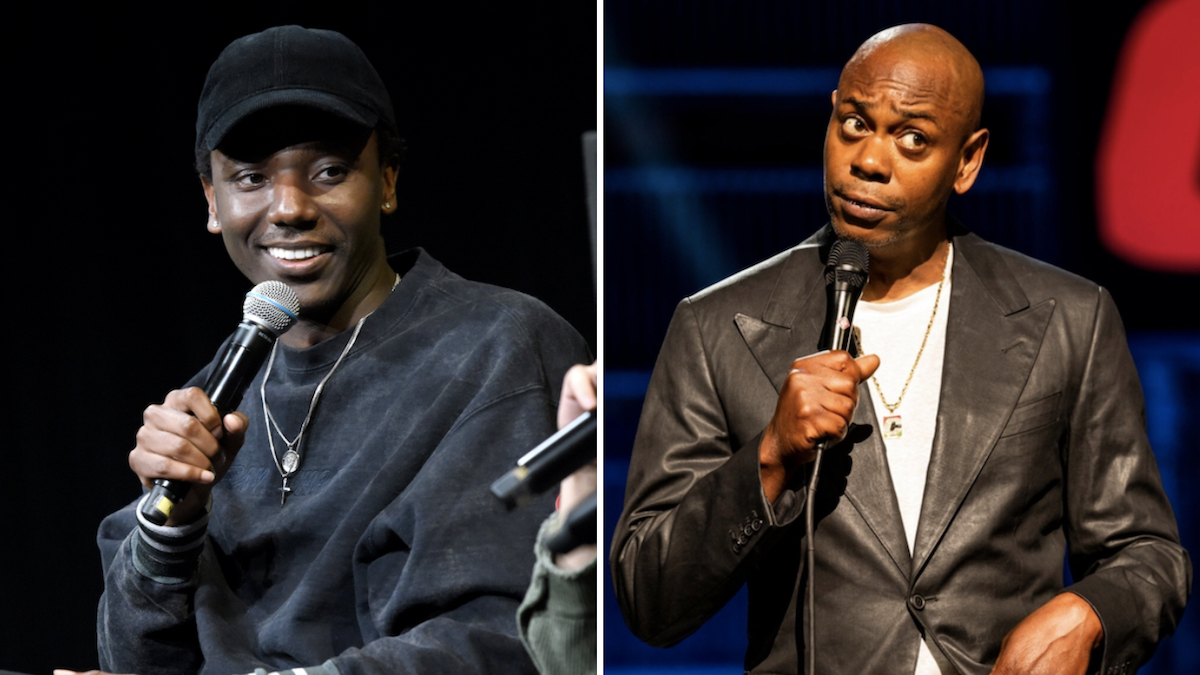 Dave Chappelle has stirred up a lot of conversation about cancel culture and offensive comedy since he decided to make transgender people the butt of all of his jokes, and now, Jerrod Carmichael has entered the chat. In a new interview with GQ, the openly gay comedian questioned Chappelle’s tendency to double down on transphobia, calling his position “an odd hill to die on.”

Carmichael was originally proclaiming his love for Generation Z after sharing an anecdote about his young cousin being his most supportive relative after he came out as gay. “I love this generation,” the comedian said. “I actually fuck with them, and fuck all those comedians that are going so hard against them.”

Naturally, then, the conversation turned to Chappelle, who has recently become a figurehead for comedians allegedly victimized by young people’s cancel culture. “Chappelle, do you know what comes up when you Google your name, bro?” Carmichael asked. “That’s the legacy? Your legacy is a bunch of opinions on trans shit? It’s an odd hill to die on.”

Carmichael also spent time doubling down on his own controversial opinion, which is that cancel culture doesn’t exist. “Look, I get it. Everybody’s got to create a boogeyman to sell tickets. But it’s not true,” he said. “Who’s getting canceled for what they’ve said? What does that mean, that people are mad on Twitter? Everybody’s fine. These grown men are fine. I think, a lot of times, people who offer nothing truthful or meaningful about themselves then complain about society at large and create this boogeyman. It’s like, listen, that’s the most urgent thing in your life? God bless you. I’m tired of hearing it.” Turning to Chappelle, he challenged the comedian to be more vulnerable in his comedy: “It’s like, hey, bro. Who the fuck are you? Who do you fuck? What do you like to do? Childish jokes aside, who the fuck are you? It’s just kind of played.”

Check out Carmichael’s full interview here. The comedian’s directorial debut, On the Count of Three, premiered at last year’s Sundance, while his latest special, Rothaniel, is on HBO Max now. Meanwhile, Chappelle’s jokes continue to strike a nerve: In May, he was attacked during a stand-up set by a man who said he felt “triggered” by the comedian’s jokes about the LGBTQ+ community and homeless people.

Is Amazon Primed to Replace Pepsi as Super Bowl Halftime

Kaia Gerber defies trends and continues to grow her full

Naomi Watts launches her own brand for menopausal women

The Predator franchise goes back to an uncolonized America in

Naomi Watts launches her own brand for menopausal women

The Predator franchise goes back to an uncolonized America in

Britney Spears’ Sons Will Miss Her Wedding, But Selena Gomez,

This $25 Old Navy Cami Is the Elevated Basic Everyone

Other, Squared: Where Are the Black Gay Horror Leads?