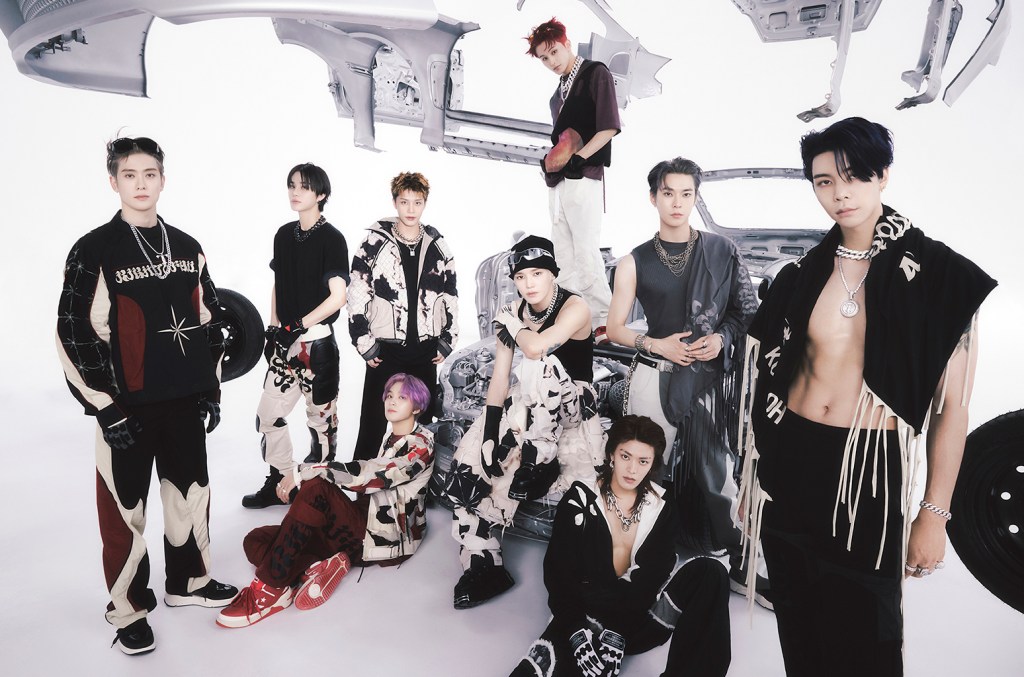 “Fast” is the first word said on NCT 127‘s latest album and embodies the palpable excitement and passion the boy band has for their new music.

The group’s last full-length from nearly a year ago, Sticker, became the act’s highest- and longest-charting project when it peaked at No. 3 and spent 17 weeks on the Billboard 200. Their latest, 2 Baddies released on Sept. 16, is the record they plan to reach more fans with even greater ambitions and goals.

Speaking over an afternoon Zoom call in Seoul, the members talk excitedly about an album they see as pushing themselves as experimental K-pop artists who fully commit to exploring different sounds. While album openers “Faster” and “2 Baddies” embrace high-turbo energy alongside multiple racing and car references, the LP explores different sounds, the LP quickly shifts into new gears to explore various genres. There’s harmony-heavy R&B (the one-two emotional punch of “Gold Dust” followed by “Black Cloud”), both heavy and feel-good hip-hop (on the chant-heavy “Tasty” and cheeky “Vitamin,” respectively), with the LP closing out with new sonic territory for NCT 127 via the rock-pop vibe of “LOL (Laugh-Out-Loud),” and uplifting, grooving synths on the fan-dedicated track “1, 2, 7 (Time Stops).”

The guys have high hopes for their 12 new tracks and want to ensure the charts are bracing for their impact. “Tell Billboard to get ready for our No. 1 spot,” NCT 127 member Mark half-jokes before Jaehyun adds: “This is the attitude for 2 Baddies.”

Cruise into NCT 127’s new attitude below with insight into their latest LP, upcoming concerts, dreams and more.

Tell me a bit about the meaning of the title 2 Baddies, the album’s name and single. It’s a unique title.

JOHNNY: The Korean title is “질주,” which means “too fast.” It’s talking about just moving forward, not caring about what others are saying about you, and just going fast and looking forward. And my take on “2 Baddies” is because of a Porsche, basically, because most of them are two-seaters. That’s how it’s all brought together to make “2 Baddies.”

You mention Porsches, and there are car elements throughout the album: songs “2 Baddies” and “Faster,” the styling, the video. Are any of you racing fans?

TAEYONG: I really like to play car-racing games like KartRider. I really like the—how can I say it?—the blue fire nitro boosts? I really enjoyed the concept, it’s my style.

Why was this the right comeback song? It’s been awhile since we had a new NCT 127 album.

MARK: In my opinion, I feel like the last songs we came out with, “Sticker” and “Favorite,” were pretty new. Like, the concept of “Sticker” and “Favorite” was very new and really experimental for NCT 127. After almost a year, we feel like we should kind of bring back what we do best. For 2 Baddies, all those previous experiences that we had all came into one whole constructed song and album. Timing kind of came to us this time.

How did you guys get involved with the album creatively?

MARK: TAEYONG and I wrote some raps for the song in the album like “Time Lapse” and “Designer.” Other than being involved with the songwriting, we all really took part in recording the album because we all knew that long kind of hiatus that we had before this album was something that motivated us to [put] a lot more of our spirit and our hearts as we did the recording. For each song, we all really brought our upgraded game into the recording studio, and we all really had our own interpretations. We really took part, each and every one of us.

JAEHYUN hinted in an earlier interview that the choreography has a “free” vibe. Can you explain this a bit more?

JAEHYUN: As I kind of teased last time, there are some parts where you can kind of freestyle, smile and show a lot of emotions while doing the whole performance. It’s not like full freestyle, but I think the dance element is more free this time because you can express any kind of feeling while performing “2 Baddies.”

JUNGWOO: I think “Vitamin,” I really like the quickness of the song.

How does this album continue NCT 127’s story as a group representing K-pop?

TAEYONG: We really felt that this was something that we could do the best and we were doing something that really brought out our core strengths and skills. Even when we were recording, people around us were commenting about how “This is something that NCT 127 could do the best out of everybody else.” So, we were really excited to showcase our strengths and skills through this album comeback. As a part of the K-pop community, we want to experiment and continue to show our growth and development, and, hopefully, start or kickstart a new wave in K-pop.

Yeah. More baddies in K-pop. I’m ready for it.

Your Sticker album hit No. 3 on the Billboard 200, which was a new best for you. Any hopes or any Billboard chart goals this time?

JOHNNY: I think No. 1 is everybody’s goal. It’s always there.

You’ll be back in the U.S. soon for two concerts. What can fans expect from these upcoming LA and New York concerts?

JOHNNY: It’s already been two or three years since we’ve all been to the U.S. together so I think just that will have our fans very excited. But we also have the new album coming out before that so I’m just going to tell you that, yes, we’re going to implement the new music into our setlist in the concerts. We have a lot of things prepared and I’m sure everybody will fully be able to enjoy our concerts.

TAEYONG: You may see what you expect, but you also may see something that you really don’t expect. You can expect what you’ve been expecting, but you can also look forward to being surprised by something unexpected.

MARK: Wow. He twisted that up!

Anything else you want to make sure Billboard knows or is messaged around this album?

MARK: Tell Billboard to get ready for our No. 1 spot.

JAEHYUN: This is the attitude for 2 Baddies!

MARK: See you up there! But all jokes aside, we’re really excited about putting out our fourth full-length album. Our fans have been super patient and supportive for this whole project, and we really worked on this album like that much harder. So, we really want to show our passion to our fans as well. We’re really excited to show the world about our album as we just hope our fans love it. We’re excited to perform.