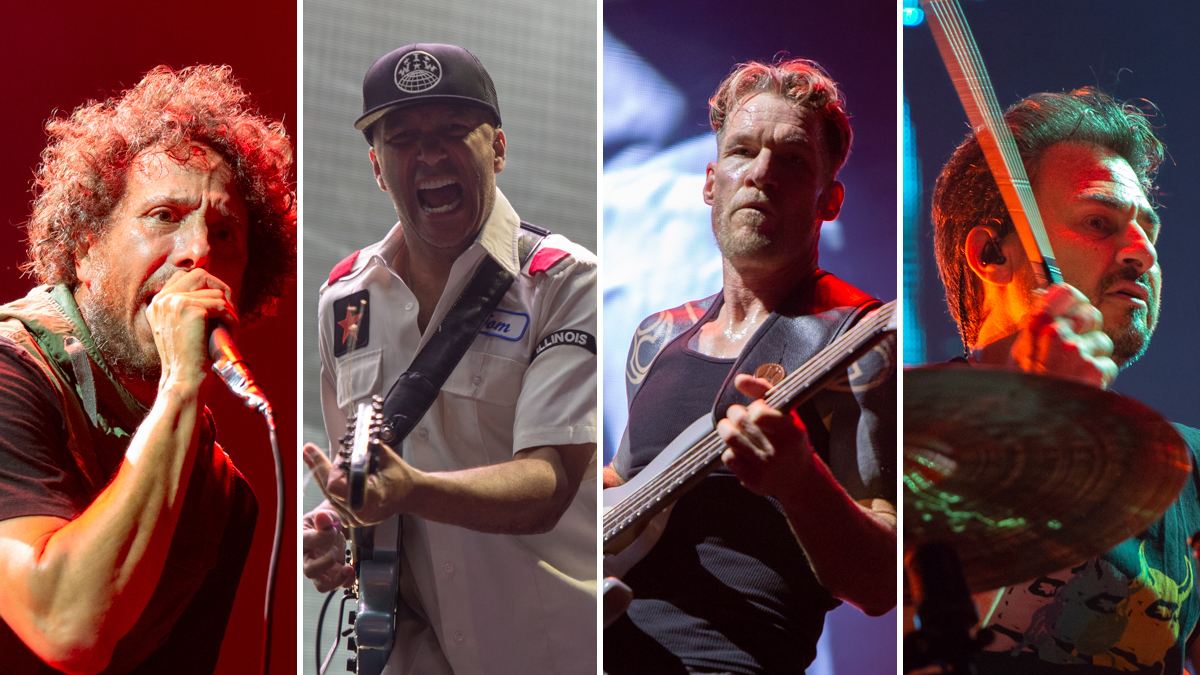 Rage Against the Machine have embarked on their “Public Service Announcement Tour,” which the quartet launched last month at the Alpine Valley Music Theater in East Troy, Wisconsin. Marking the band’s first live shows in 11 years, the ongoing trek was originally scheduled to ignite in 2020, but was postponed twice due to the global pandemic. The first leg is winding down with a five-night stand at New York City’s famed Madison Square Garden, which began with a show on Monday night (August 8th). A UK/European run begins later this month, plus a second leg of US and Canadian shows is set for early 2023, with tickets available here.

Monday night’s show at MSG saw Rage Against the Machine playing to a completely sold-out crowd. Still healing from a leg injury sustained during the band’s Chicago show at the start of the outing, frontman Zack de la Rocha belted out all 18 fury-filled tracks while seated center stage on a road case. Temporary mobility impairment aside, there was no holding de la Rocha’s energy back, as the singer vigorously shifted around and headbanged uncontrollably while restricted to the confines of his road box, and still sounding as fierce as ever.

With a massive LED video wall looming in the backdrop containing the words “Fear Is Your Only God” sprawled across the screen and accompanied by a video feed of the show, Rage Against the Machine kicked off their set with the opening track on their 1992 self-titled debut album, “Bombtrack.” The reunited rockers stormed through epic classics like “People of the Sun,” “Bulls on Parade,” “Bullet in the Head,” “Guerrilla Radio,” “Down Rodeo,” “Know Your Enemy,” set closer “Killing in the Name” and much more during their 90-minute set. The band also covered the Bruce Springsteen track “The Ghost of Tom Joad.”

Following an incident at the Toronto show last month, in which an audience member rushed the stage — resulting in a security guard knocking guitarist Tom Morello off the stage — the MSG concert saw RATM’s security team thoroughly guarding all staircases and roads leading to the band. The Bobby McFerrin song “Don’t Worry, Be Happy” blared through MSG’s massive speaker arrays as RATM retired to their dressing rooms and fans ushered on home.

Prior to RATM hitting the stage, hip hop duo Run the Jewels opened the evening with a 45-minute set, marking the band’s second appearance at the world famous arena. RTJ’s MSG debut happened in 2015 when the act landed a slot opening for Jack White, a stint that saw them perform “Close Your Eyes (And Count to F**k)” with de la Rocha as special guest vocalist. Zack did not make an appearance during Run the Jewels’ set at The Garden on Monday night, though the super-duo did welcome NYC-based hip hopper Greg Nice during “ooh la la.” Throughout the set, Run the Jewels — comprised of Atlanta native Killer Mike and Brooklyn’s own El-P — kept the Manhattan crowd moving with huge tracks like “Blockbuster Night Part 1,” “Oh My Darling Don’t Cry” and “Legend Has It.”

Photo Gallery – Rage Against the Machine and Run the Jewels at Madison Square Garden (click to enlarge and scroll through):

Rage Against the Machine Setlist:
Bombtrack
People of the Sun
Bulls on Parade
Bullet in the Head
Testify
Take the Power Back
Wake Up
Guerrilla Radio
Down Rodeo
Know Your Enemy
Calm Like a Bomb
Sleep Now in the Fire
Born of a Broken Man
War Within a Breath
The Ghost of Tom Joad (Bruce Springsteen cover)
Freedom
Township Rebellion
Killing in the Name

Run the Jewels Setlist:
Call Ticketron
yankee and the brave (ep. 4)
Close Your Eyes (And Count to F**k)
ooh la la (with Greg Nice)
Blockbuster Night Part 1
Oh My Darling Don’t Cry
Legend Has It
Stay Gold
Don’t Get Captured
JU$T
walking in the snow
a few words for the firing squad (radiation)