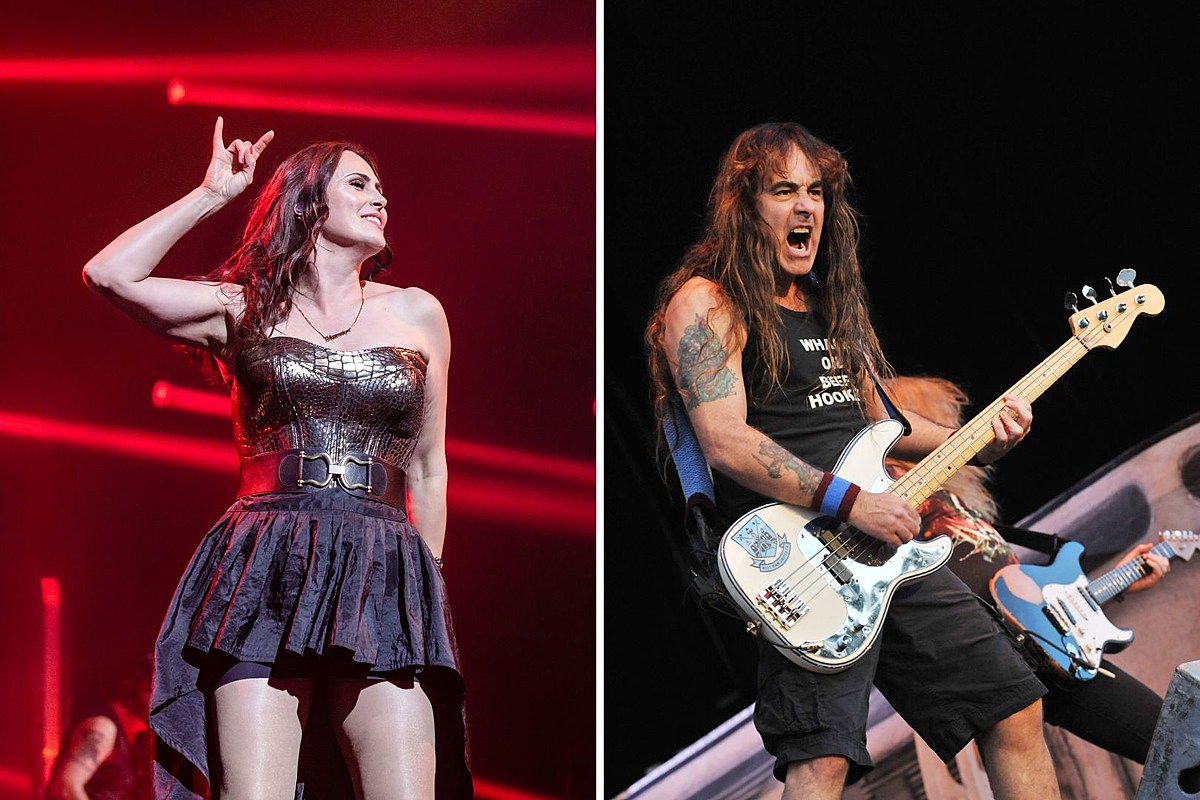 Within Temptation lead singer Sharon den Adel was the latest guest on Full Metal Jackie’s weekend radio show. Earlier this fall, the Dutch symphonic metal band band opened a North American leg of Iron Maiden’s “Legacy of the Beast World Tour,” so there was much to talk about.

A new Within Temptation album is expected in 2023. Since 2019’s Resist, the group has shared several new singles, including this year’s “The Fire Within” and “Don’t Pray for Me,” both of which are expected to appear on the forthcoming effort. Read the interview with den Adel below.

Tell us what it was like to be on the road with Iron Maiden.

It’s been such a pleasure. We’ve been playing with them before this tour, actually. A few festivals, but we’ve known each other — actually, we did the first show together 15 years ago in Paris. And that was really cool. And since then, they kept on asking us, so probably we did something right. There was a mutual kind of good vibe going on.

We’ve always loved Iron Maiden, so for us it’s been a pleasure always. … They still love music as much as the first time they started it, actually. I think if you still have that after so many years, then you really did it the right way. For me, that’s the most important. To stay in love with music because then I can continue it. But the way they do, it with the same kind of, I don’t know, wonder and surprise. … It’s like, this is Steve Harris, you know?

Within Temptation have always been musically adventurous, often outside the box of traditional genres. What different musical elements and ideas are influencing the music that you’re making right now?

It’s several things. We’re always searching for what’s new that inspires us. … A lot of things from the past that inspire us. But we also try to stay true to a version of ourselves in 2022. And that’s what we are always hoping for, at least. The aim is to surprise ourselves and to keep inspired with new music every time.

[On the lyrical side] I think as an artist you have the privilege to talk about the things that touch you and worry you and those kind of things. And in the past we didn’t do that that much. We did it a little bit like in metaphors. Nowadays, we’re just very open about what we think. I think it’s necessary as an artist in a way.

There’s a new album expected next year, but already you’ve been releasing singles. How do you ensure an album is a full self-contained listening experience when a good number of songs are individually familiar?

Well we don’t know yet. It is for an experiment and, you know, a lot of other musicals genres already have done it this way. For us, it was an experiment before [COVID-19] even started. And when it started, we were really happy that we took this path and to keep ourselves busy, but also for the fans, it was really nice.

And and now it’s like we have to see how this develops and how it will be in a good way or a bad way that we do it this way. But there are still gonna be a lot of songs on the album that people have not heard beforehand that weren’t released beforehand, of course. So yeah, I just hope they will like it and that’s all we can do.

“Don’t Pray for Me,” your latest single, is timely, especially here in the United States because it references people imposing their beliefs on others. What upsets you most about people being so forceful about their viewpoints?

Well, that I think because not in your country only, it’s also in Poland in a lot of countries in Europe as well, where we have the same development going on. And what I find so sad about the whole thing is that as I’m looking mostly to kids who can’t defend themselves and the more very pure in what they feel and who they wanna be that they are so already told what to be and not to be and you know not be able to find their own way in life and their own adventure and their own, you know, just love the, you know, I think it’s really sad that people are trying to take away their chances in a way to discover themselves in a natural way instead of trying to be something they’re not or maybe living a life they don’t want to live.

You know, like also abortion laws and those kind of things is, for instance, Poland. Even in with cases of incest, you’re not allowed to have an abortion anymore, at least that they’re making these these laws now at the moment, sexual education is forbidden in Poland nowadays. So these kind of things are development of the current government they have. So things in Europe are happening the same, in the same way, more or less, and it’s because it’s religion that combined with politics, which is to my opinion, the wrong way to have politics.

Iron Maiden is one of the most influential bands of all time. What does it say about Within Temptation that your compatible tour support for a band revered so much as Iron Maiden?

Well, maybe I’m just guessing what I think is a comparison maybe is we have a lot of epic songs, you know, we’ve always been very much in the past, especially inspired by history and I think it’s, those songs are an adventure on its own. I think that’s something that’s maybe similar to Iron Maiden and a little bit of fear. It’s fair we love and they have that a lot. They were like, wow, you know, they were an inspiration for so many bands doing what they do. So I guess, yeah, we got maybe also an inspired in a way how to do that in our own way, of course.

Growing up, you were almost nomadic, traveling and living in numerous countries. How have those experiences benefited you most as a touring musician?

Well, I think you can hear it sometimes in the songs. I’ve lived in Indonesia, Yemen and [other places]. Sometimes, like I’m dancing on stage with my hands like this. [Laughs] And if you go to Bali in Indonesia, you have these dancers. These female dancers always moving around with their hands. And I think I adopted that when I was a kid. Like, oh my God, that’s so amazing. And now when I dance, I just automatically take my hands with me and move along. That’s one of the things.

And I think with I also like Arabic music and sometimes we have a little bit of influence in our songs with that Arabic kind of notes and stuff. I love that very much. So I think those kind of things I integrated and also how I look, I look on the world and how different cultures are. I think that really made me as a person, and eventually also helped me become a certain kind of musician.

Sharon, it is so great to catch up with you. Congrats again on the Iron Maiden tour and all things to come. What can we expect for 2023?

Well, there’s going to be another single. At least one, maybe two, and a new album. So yeah, a lot of things to look forward to. A lot of festivals. We’re maybe coming back to America at someday very soon, I don’t know. There’s so many things being planned in the background at the moment. I don’t know what it is going to be. But there’s a lot of things cooking.

Thanks to Sharon den Adel for the interview. Listen to Within Temptation here and below. Find out where you can hear Full Metal Jackie’s weekend radio show here.

Within Temptation, “The Fire Within” (Music Video)

Within Temptation, “Don’t Pray for Me” (Music Video)

Bands Who Have Admitted to Using Backing Tracks

These musicians say backing tracks help them put on the best show they can and have no shame in confessing it.

Infinity Pool Sends You Down a Road of Hedonistic Excess

Tobe Hooper: Celebrating the Legacy Of A Horror Hero